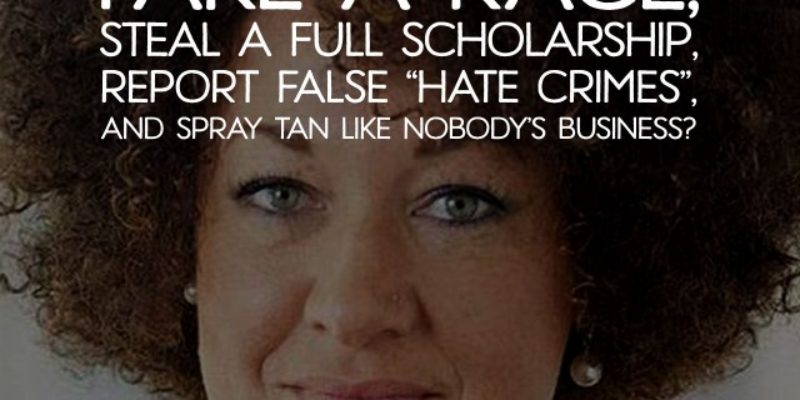 Editor’s Note: A guest post from our friend Ryan Bomberger, president of the pro-life group The Radiance Foundation, who recently won an appellate case against the NAACP after the latter had sued him for satirizing it for its pro-abortion advocacy. 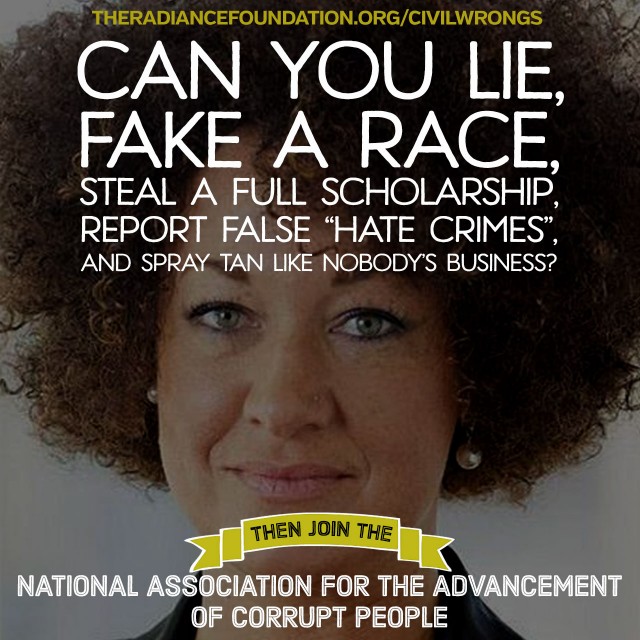 Fresh off a stinging courtroom defeat, the national NAACP leadership reveals how little it considers its legacy. They sued an actual black (biracial) man for “harming” its reputation for accurately calling them out on their radical support for abortion. But a white woman pretending to be black, who generated hate and bitterness over false “hate crimes” reports, who stole a full scholarship meant for an actual black American, who pretended to be a mother, who pretended to have a black father, who lied about nearly everything about herself was worth an immediate defense by the NAACP.  According to their press release: “The NAACP Alaska-Oregon-Washington State Conference stands behind Ms. Dolezal’s advocacy record.”

Her “advocacy record”, like her hair and spray tan, were a bunch of lies.

The NAACP president, Cornell William Brooks, then issued a statement on June 15th that further adds to the organization’s laughability: “The NAACP is not concerned with the racial identity of our leadership but the institutional integrity of our advocacy.” Really? The first national chapter president wasn’t white until 2010 (and Michael Teasleyhas since passed away). The NAACP has always been about racial identity. Not one of the NAACP’s Board officers is non-black. Out of the 62 Board memberslisted, only two are white; everyone else appears to be black. Obviously, the NAACP is not concerned with racial identity.

The NAACP also has little “institutional integrity”. The integrity of any organization depends upon the people who lead it. Dolezal, like a number of criminal NAACP chapter presidents (see here, here, here,here and here), has no integrity. The vetting must be non-existent when it comes to filling an NAACP chapter president position. Take, for example, the disgraced NAACP LA President, Leon Jenkins who wanted to lavish LA Clippers owner, Donald Sterling, with a lifetime achievement award. According to the LA Times, records from the State Bar of California show that when Jenkins was a Detroit judge, he was “indicted in 1988 on federal bribery, conspiracy, mail fraud and racketeering charges.” Basically, he accepted gifts from those who would then show up in court and commit perjury. The Michigan Supreme Court disbarred him in 1994. He was then disbarred in 2001 by California where he tried to practice law again. But hey, why should that stop anyone from becoming a leader in one of the most prominent civil rights groups in the nation?  If Jenkins had not decided to praise a racist NBA owner, he’d still be a national Board member and chapter president of the National Association for the Advancement of Corrupt People. He resigned in 2014.

The NAACP will defend anyone who is liberal and demonize anyone who is conservative, especially if they’re black. The NAACP’s press release shows their moral deficiency, refusing to address Rachel Dolezal’s life of corruption and uphold her “advocacy”. A lying, cheating, racially divisive con artist doesn’t negatively impact this “civil rights” organization–only those who oppose its sacred agenda.

The NAACP spent hundreds of thousands suing a small little non-profit organization (The Radiance Foundation) and me, personally, because I dared to present diligent research in the form of a news article, parodying their name. Calling them the National Association for the Abortion of Colored People incurred their wrath and their wealth. NAACP Vice President, Hilary Shelton, who was apparently fed lines during his testimony in our court case, knew nothing about our work or our mission but was sure to say that we’re “extremists”.

We are. It is extreme to actually speak truth these days. Our founding fathers’ quest for independence branded

Rachel Dolezal is as black as Bruce Jenner is female. Race fluidity doesn’t have the same irrational support as gender fluidity. Both are nonsense. Pigmentation is inarguable. Biological gender is inarguable. But in an increasingly liberal and indoctrinated culture, driven purely by emotion, too many have a warped sense of “equality” and “justice”. And the ends always seem to justify the means.

Thank you Rachel Dolezal for illuminating the disorder that is liberalism. The Reverend Al Sharpton, an individual who has an acute aversion to the truth, blames the parents for this whole impersonation routine. It couldn’t possibly be the culprit’s own actions (falsifying “hate crimes”) that led investigators to the source of the crime: Dolezal’s own lies. Discontented to expose the corrupt nature of the NAACP and its leadership, mainstream media and defenders of the indefensible would rather dish out the dirt on her family.

I hope Ms. Dolezal will seek professional counseling, and I pray for healing in her family. Hopefully, it’s still legal to counsel someone to cope with biological reality…that we can’t arbitrarily change what biologically has already, clearly, been determined. I prefer a world where truth is not fluid and changeable according to whatever cultural climate exists. I like truth as a rock solid foundation. Perhaps if Ms. Dolezal chose to stand on that years ago, she wouldn’t be drowning in the pool of her own “truths” today.

Interested in more national news? We've got you covered! See More National News
Previous Article SADOW: The Fundamentals Of The Movie Tax Credit Are Still The Same, And They Still Stink
Next Article Low Popahirum, June 16, 2015