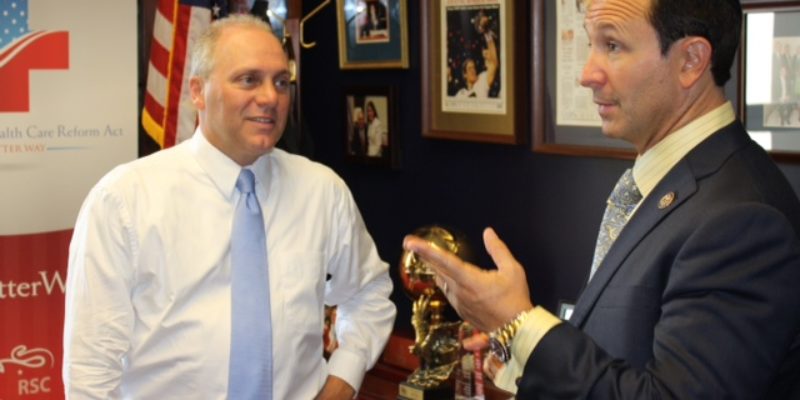 It happened during an interview on WRNO-FM in New Orleans. Here’s the release from the Landry campaign:

Scalise said: “Jeff Landry is an honest, ethical, and hard-working leader who puts people over politics. Jeff Landry’s record of law enforcement, job creation, and principled lawmaking uniquely qualify him to be Attorney General. I know Jeff Landry will run an open, accountable, and fiscally responsible office; and I wholeheartedly support him for Attorney General. We need Jeff Landry as Attorney General to fight federal overreach, defend our conservative principles, and make our communities safer.”

Landry said: “Steve Scalise is a true public servant who represents Louisiana well. I am honored to have Steve’s endorsement and hope to earn the votes of our neighbors in my campaign to bring honesty, integrity and conservative principles to the Attorney General’s Office.”

What you’re seeing in this race is conservative leaders lining up behind Jeff Landry instead of the incumbent AG, Buddy Caldwell. Landry will likely pick up the support of the business community as well. He’s also done a great job raising money so far in this race.

But our most recent polling on the race still shows Landry lagging behind.

Alexandria Mayor Jacques Roy is still considering the AG race. Although Roy has not announced he is running and has little statewide name recognition, being the sole Democrat is to his advantage. He is polling at 23.7%. Jeff Landry trails Roy by 3 and incumbent Buddy Caldwell by 6 points, and is well within striking distance with a large number of undecided voters. This race could go down to the wire as to which two candidates will make the runoff.

Whether or not Landry can leverage his money and endorsements into a runoff position remains to be seen.

Interested in more news from Louisiana? We've got you covered! See More Louisiana News
Previous Article Quote Of The Day, June 22, 2015
Next Article And Now, Earl Holt And The Confederate Flag