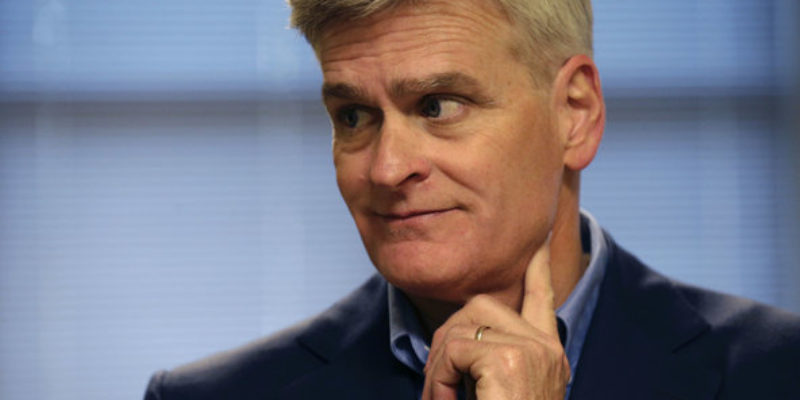 A press release out of Sen. Bill Cassidy’s office points out an easy way to shave a few billion off the federal budget, and suggests there’s a whole lot more where that came from, in case you might have been dumb enough to believe Washington runs a tight ship…

U.S. Senator Bill Cassidy, M.D. (R-LA) sent a letter to Office of Management and Budget (OMB) Director Shaun Donovan concerning federal agencies wasting billions of taxpayer dollars on the lack of management and the duplication of software products for these agencies.

“More than $4 billion taxpayer dollars could be saved if federal agencies keep track of what software they buy. It’s irresponsible they don’t do so already. Tax dollars could be better used on our troops and our classrooms, not redundant software programs.”

Dr. Cassidy also introduced the Eliminating Government-Funded Oil-Painting (EGO) Act in the U.S. House of Representatives and the Senate. The EGO Act bans taxpayer funds from being used for oil paintings of the president, vice president, cabinet officials or members of Congress which can often cost as much as $40,000.

Read the letter below:

Office of Management and Budget

I am writing to express my deep concern over the management of the federal government’s software license inventory. Specifically, I am troubled by the information presented in the May 22, 2014 Government Accountability Office (GAO) report entitled Federal Software Licenses: Better Management Needed to Achieve Significant Savings Government-Wide. These concerns were echoed for the second time in 2 years in the 2015 report entitled Additional Opportunities to Reduce Fragmentation, Overlap, and Duplication and Achieve Other Financial Benefits. The May 2014 report determined that the Executive Branch does “not have adequate policies for managing software licenses”.

The report states that of the twenty-four major federal agencies, only two have implemented policies of comprehensive and clear management of federal software licenses. It is estimated that these oversight policies save just one agency $181 million per year. Two of the twenty-four have established inventories of their software licenses. Furthermore, none of the agencies have fully implemented all five practices recommended by GAO. This troubling information shows that there is great potential for additional systemic issues, like those seen at the Department of Veterans Affairs and Internal Revenue Service.

In addition to the 2014 report, GAO testified on June 10, 2014 before the Homeland Security and Governmental Affairs Committee, Sub-committee on Efficiency and Effectiveness of Federal Programs and the Federal Workforce. The testimony explains that “The weaknesses in agencies’ policies were due, in part, to the lack of a priority for establishing software license management practices … and a lack of direction from OMB”. In an interview with GAO investigators, one official from OMB’s Office of E-Government and Information Technology said the agency has “no plans to develop such guidance at this time.” However, the report concludes that there must be “sufficient direction from OMB, [or] opportunities to systematically identify software license related cost savings across the federal government will likely continue to be missed.”

Based on the above information, I request answers to the following questions:

I appreciate your prompt attention to these questions.

Interested in more national news? We've got you covered! See More National News
Previous Article The House Ways And Means Committee Has Ensured That Jindal Will Veto The Budget
Next Article VIDEO: George Will Gives The Commencement Speech Every College Grad Should Hear