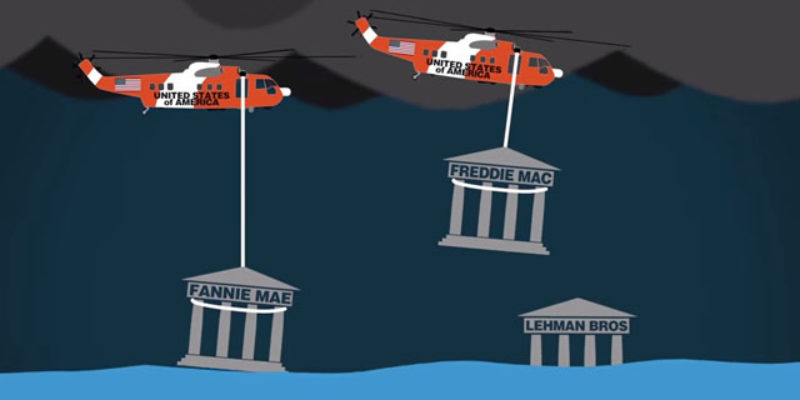 The demonization of Wall Street and the financial industry is a popular hobby on the left, as is presenting Wall Street as some sort of right-wing cabal bent on enforcing predatory capitalism on the working man. Liz Warren, Barney Frank, Chris Dodd, Bernie Sanders and the like have built profitable political careers on that clownish narrative, all the while catching political contributions from that same industry as they would hope to ride the regulatory binge the Hard Left promises into a seat at the table it could use to insure market share at the expense of the smaller players in the financial sector.

Thus we responded to To Big To Fail by essentially legislating community banks out of business, and that’s one reason why you see very few banks and financial institutions demonstrating rapid growth since 2008 while the big boys chug along, larger than ever.

But the real story of Too Big To Fail isn’t what Liz Warren says it is. And in this installment of Prager University, Economist Nicole Gelinas, a fellow at the Manhattan Institute, gives the truth on why the financial meltdown happened. It wasn’t a market failure, it was an incompetent government which put in place a bad regulatory scheme and built perverse incentives into the financial industry. When it departed from its usual practices of bailing out financial institutions who had followed that scheme and those incentives off a cliff by letting Lehmann Brothers die, it brought on the collapse.

Interested in more national news? We've got you covered! See More National News
Previous Article WAGUESPACK: Do Your Job
Next Article Now THIS Is A Campaign Announcement