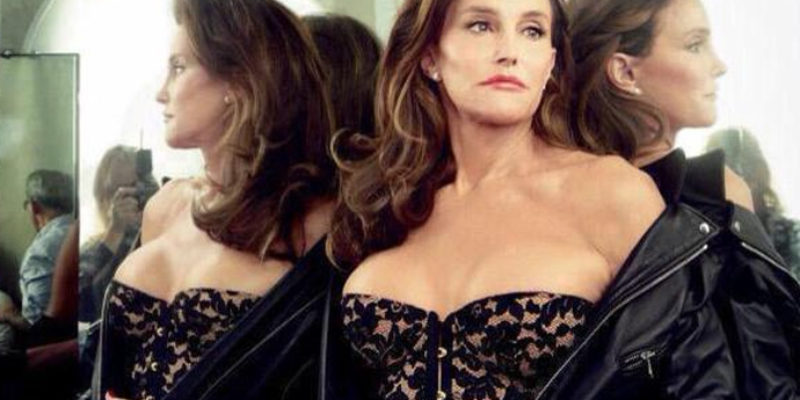 When Bruce Jenner suddenly appeared as ‘Caitlyn Jenner’ on the cover of Vanity Fair, the mainstream media went gaga. Now, if you read any article about Jenner, she will be perceived as a canonized saint, comparable to that of Mother Teresa.

While the Left raises Jenner up to be the epitome of modern culture, it was the mainstream media who mocked Jenner along her ‘transition’ period over the last year.

Jenner became somewhat of a tabloid queen, with photographs being shot of her looking more and more like a male trying to appear as a woman. And during this time, Jenner was mocked, and the larger, mainstream media didn’t say a word about it.

Fast-forward to post-Bruce Jenner and now Caitlyn Jenner and you have an entirely different story from the media. The media has been left-of-center for decades, but now, it is all out totalitarianism on what the public can and cannot say or do.

Take for instance how the media has portrayed themselves as bystanders in the Jenner transition. A look through articles on Salon.com, Slate Magazine and Vox.com will clearly show that the Left believes they are right about trans issues and everyone else is ignorant and bigoted.

For the Left, the trans issue is simple. To them, Caitlyn Jenner was biologically a man, but he identifies as Caitlyn, a woman, so therefore the public must accept that idea that ‘he’ is now ‘she’ or run the risk of being out-casted as ‘transphobic’ by Leftist culture.

But, the media could not be more wrong.

Trans issues are not simple. They are not black and white. And they are, whether the Left likes it or not, controversial. How could an individual spending millions of dollars on hormones, plastic surgery and gender reassignment surgery be considered the ‘norm?’ It is simply not something individuals do every day.

For individuals who identify as ‘transgender,’ it is not simple for them either. Many of them feel trapped in their own bodies and have for a long time felt that they were born the wrong gender. The trans issue gets even more difficult when the individual does transition and then later on still feels as though they are not the person they were meant to be. It is hard for trans people and these difficulties are not simple like the media makes them out to be.

The notion of transgenderism is complicated and that’s okay.

But, for the Left media, it is the trans way or the highway. Anything in between is just foolishness and bigotry. You either love trans individuals no matter what or you absolutely despise them and think they’re vile. There’s no in between.

Aside from the trans issue being complicated, being transgender is not as glamorous as the Left and media tries to make the public believe. Often times, trans individuals suffer with other problems, like suicidal thoughts and depression. Even Jenner said she contemplated suicide when she was transitioning into a female appearance.

Trans individuals struggle, even after they transition into a new gender identity. But, if you were to just look at the Vanity Fair video of Jenner’s fashion shoot, you’d think ‘Wow, she’s completely free of all of her problems, all because she can wear a dress and lipstick in public now.’ That’s not true, by any standards.

And then of course there are the trans pronoun issues that the Left has resurrected. As you can tell, I have been referring to Jenner as ‘she.’ I only do this because Jenner wants to be called ‘she,’ so I have no problem using the female pronoun, even though Jenner is still biologically a male.

However, the Left believes that if you still choose to call Jenner ‘he’ or you dare call her ‘Bruce,’ well you’re pretty much a domestic terrorist who preys on trans individuals.

Just look at the reaction that former Nickelodeon star Drake Bell received from the cultural Left on Twitter when he tweeted that he would still call Jenner ‘Bruce’ because he did not want to forget the legacy Jenner had on the Olympics back in the 1970’s.

What’s the problem though? It’s just a pronoun, right?

For those who choose to call Jenner by the male pronoun and her male birth name, they do so because they see Caitlyn as being born a man, not a woman, which is correct. They also do not want to forget the contributions to the sports world that Jenner made when she identified as a male. Even Caitlyn, according to People Magazine, still lets her kids call her ‘Dad.’ Is that transphobic too?

And that is nothing but fact: Jenner was born a man. She was not born a woman. Why can’t the Left, who claims to be on the side of science, not understand that?

While there is a difference between gender identity and an individual’s actual gender, the bottom line is that the individual will always be the gender they were born, unless of course gender reassignment surgery fixes that.

Caitlyn Jenner is still a man, though she identifies as a woman. Nonetheless, for the Left to try to simplify trans issues and tell us otherwise is fallacious.

The Left and their counterparts in the media are not transphobic, they’re transtupid. And they are certainly not helping trans individuals.

Interested in more national news? We've got you covered! See More National News
Previous Article SADOW: The Senate Seems To Have A Few More Fiscal Clues Than The House
Next Article What’s Wrong With This Picture?