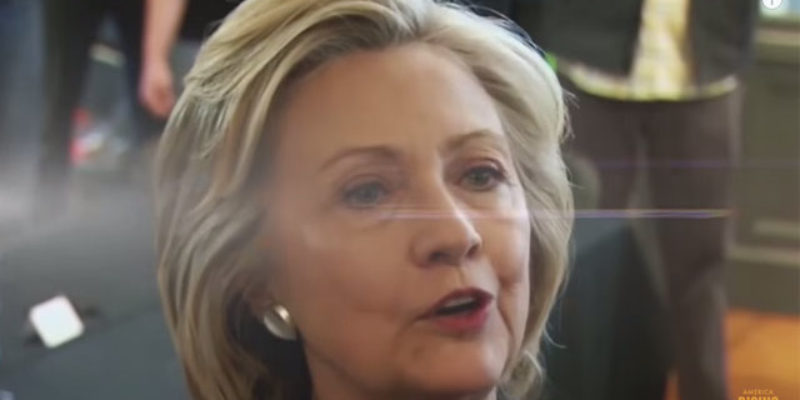 We’re not going to make the case that this particular web ad is the key to keeping Hillary Clinton out of the White House, but the message it contains is pretty close to what needs to be done.

The best way to destroy a political opponent is to enhance and capitalize on bad things the public already thinks about him or her. A good example of that came in 2012 when the Obama campaign seized on Mitt Romney’s image as an out-of-touch plutocrat and ruthlessly pushed that narrative over and over and over again. Romney was a rich guy with a car elevator in his garage, and he was a vulture capitalist who sent jobs overseas when he bought up companies.

And he killed some guy’s wife with cancer.

When Romney was caught on a hidden camera writing off 47 percent of the electorate as welfare drones who won’t vote Republican – which wasn’t actually what he said; what he was saying is that when those people aren’t paying federal income tax you’re not going to convince them that reform of the federal tax code isn’t going to get their vote, but who cares? – the way to re-election for Obama was clear. And exit polls showed the public agreed with Romney over Obama on practically every single issue, but it didn’t matter. Obama got 81 percent on the question which candidate cares most about the people, and that’s why he won.

So with Hillary, while she is without question an out-of-touch plutocrat (and is attempting to minimize that by attempting to run as a champion of the little guy) her major weakness is the fact she’s utterly corrupt and dishonest – something the polls show the public absolutely recognizes and can be proven over and over again through examining the Clinton Foundation and her role in Benghazi.

The web ad doesn’t even attempt to prove she’s corrupt and dishonest. That’s taken as a given, because it can be. What the ad does is reinforce that perception over and over again in much the same way Obama hammered home Romney as out of touch.

We’ve said here often that Hillary will implode long before she gets the Democrat nomination, and yesterday’s news that a straw poll in Wisconsin gave Bernie Sanders 40 percent of the Democrat vote is evidence the implosion might well be afoot.

If she doesn’t, though, it’s messaging like the above which will finish her. In 2015 America being a far-left Alinskyite socialist, which Hillary is, won’t cost you an election. But being a crook still will.

Interested in more national news? We've got you covered! See More National News
Previous Article SADOW: Medicaid Expansion Is A Loaded Gun Pointed At The People Of Louisiana
Next Article Jerry Seinfeld And How The Social Justice Mob Is Destroying Higher Education