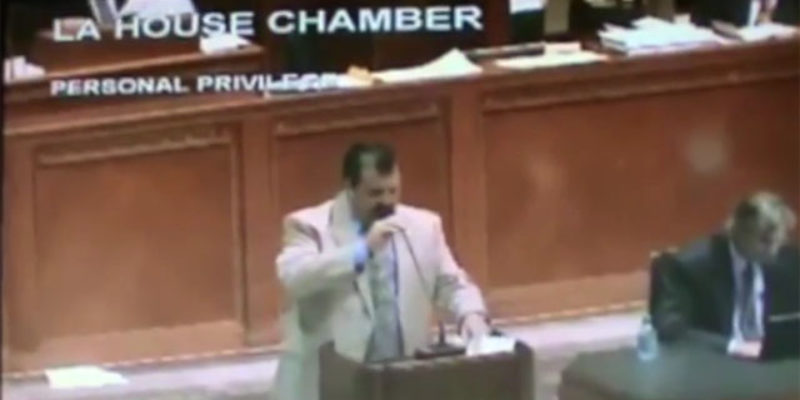 Rep. Jeff Arnold has, in this day of term limits in the Louisiana legislature, assumed a role not dissimilar to that of a Galapagos tortoise in the state House of Representatives. Arnold is the dean of the House, having been first elected in a 2002 special election (the rest of the third-term members were elected in the regular election the following year) and as this legislative session comes to a close he is in his final hours as a state representative.

Arnold is known, more or less, as Mr. Union in the House. He is also known for serving as a rather obnoxious gadfly to those members bringing bills to the House floor not favored by the typical Democrat perspective.

But that having been said, until this year he’s been seen as a relatively unremarkable Democrat, the highlight of whose career being that he lost to Chuck Kleckley in 2012 in his attempt to be made the Democrat Speaker of a Republican House.

This year Arnold made more of a name for himself by trying to get the legislature to create Algiers, the part of Orleans Parish lying on the West Bank of the Mississippi River, as an incorporated city. That measure failed completely, sending Arnold to the end of his House career (he’ll likely resurface in four years as a candidate for David Heitmeier’s Senate seat when Heitmeier is term-limited) without much to show for his time this session.

And so it’s probably not a surprise that Arnold decided to go out with a bang – and therefore he took to the floor on personal privilege so as to trash LABI president Stephen Waguespack for having the rather unsurprising opinion, given Waguespack’s position as the head of the state’s Chamber of Commerce, that raising a billion dollars in taxes principally on business doesn’t particularly qualify as sound policy.

Here’s Arnold, giving a speech that makes us look forward very fondly to the next four years when he won’t be in the state legislature…

Interested in more news from Louisiana? We've got you covered! See More Louisiana News
Previous Article In The Latest Example Of Cowardice, Louisiana Legislature Refuses To End Solar Tax Credit
Next Article Is That Guy Delgado A Racist? He Sounds Like A Racist…