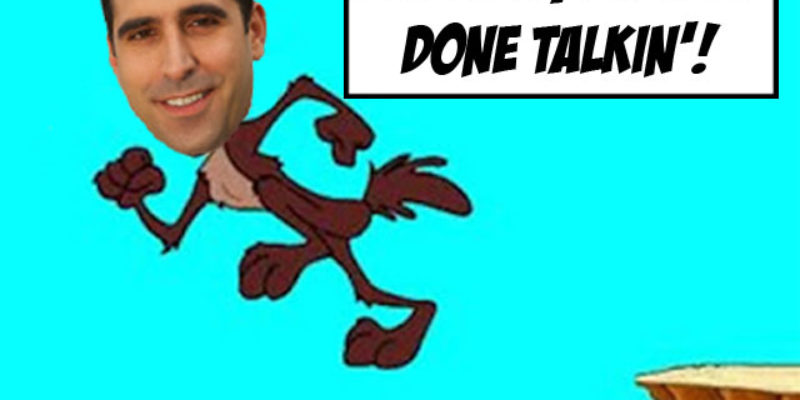 So my uncle T-Pete calls me today. He’s a muckety-muck what lives in Baton Rouge, and he says all anybody wantsa talk about in that town this week isn’t the baseball team goin’ to Omaha, but instead who’s gonna be the Registrar of Voters.

An’ that’s a big deal, he says, because the current Registrar, who’s had that job since Sweet Baby Jesus was actually a Sweet Baby Jesus, just retired. And the registrar’s office is smack dab in the middle of countin’ up all the St. George petitions to see if they’re gonna have that election. So havin’ a registrar who can do the job on St. George without people thinkin’ the fix is in is kinda important.

An’ supposedly they’re gonna appoint somebody at the Baton Rouge Metro Council today.

They had like 24 candidates for the job, but T-Pete says only four of ’em really have much of a chance to get it.

One is a guy named Stephen Raborn, who you’d think would be the guy they’d hire. He’s the Elections Administrator in Tarrant County, which is the county in Texas Fort Worth is in. And what’s more, Raborn worked in the East Baton Rouge registrar’s office.

But ’cause he’s got the experience you actually want for the job there’s no way he gets it.

Then there’s the third guy, who is Bones Addison. I never heard of that dude, because I live in Barataria Bay and all us nutria in Barataria Bay turn up our noses at ol’-time Metro Council politics in Baton Rouge (which included me until MacAoidh got me writin’ on this here site), but from what they tell me this guy Bones is more or less the closest thing to a black conservative they ever had on that Metro Council. He was there forever an’ then he got termed out in 2012, an’ ever since he’s been makin’ a livin’ doin’ a bit o’ this an’ a bit o’ that.

An’ T-Pete tells me Bones had a sorta rowdy time on the Council, meanin’ he mostly went round and round with Kip Holden a good bit. T-Pete says most of the Republicans on the council liked him OK. Chandler Loupe, the Republican who’s the president of the council, is his lawyer. So he’s considered a pretty viable compromise candidate kinda guy between the five black Democrat ladies and the seven white Republican dudes. Mostly.

Which is where that Delgado cat comes in. Because yesterday, this happened…

The Baton Rouge Metro Council is scheduled to vote Wednesday for a new registrar, earning between $85,000 and $117,0000 a year, and Councilman John Delgado said he believes a move is afoot to award the position to former Metro Councilman Ulysses “Bones” Addison.

“The fix is in,” Delgado said. “They are making Bones the registrar of voters. There is no consideration being given to candidates of actual quality.”

Based on his conversations with other council members, Delgado said, he believes Addison has the support of a majority of the council and much of that support is based on their past relationship working with him on the Metro Council.

Addison served 12 years on the Metro Council, representing the north Baton Rouge district currently held by Chauna Banks-Daniel. He worked alongside eight of the 12 sitting council members before his last term expired in 2012.

Council members and other parish elected officials are prohibited from doing business or taking a job with the city-parish for two years after they leave office. But Addison has been out of office for almost three years.

“We are not serving the people of East Baton Rouge Parish by selecting our friends over the people who are more qualified,” Delgado said. “I think it’s cronyism of the highest order and people should be outraged about it.”

Yadda yadda yadda. Guy can’t keep his mouth shut. At least nobody got called a terrorist or the Taliban this time.

But T-Pete says what’s really goin’ on is Delgado wants the fourth guy to get the job. His guy’s name is Bill Bryan, an’ Bryan is with the Attorney General’s office. He apparently handles vote fraud in that office.

An’ T-Pete also says Bryan is dirty on the Turkey Creek case.

You don’t know anything about the Turkey Creek case? OK, here…

The man at the center of a vote-buying scandal that marred the Turkey Creek mayor’s race last year pleaded guilty Friday to illegal electioneering.

An Evangeline Parish judge sentenced Stanley Leger to serve six months in Evangeline Parish Jail, then immediately suspended the sentence. Leger was also placed on 18 months probation, ordered to pay a $500 fine and pay $2,000 in restitution to Mayor Heather Cloud, according to court documents.

But Cloud sued, alleging vote buying. The court sided with her after a back-and-forth court battle and set a special election in February, which Cloud won.

Campbell has denied that he instructed Leger to buy votes for him.

What T-Pete says is Heather Cloud had the goods on this guy Leger an’ it was a no-brainer they’d bought up a buncha votes to fix that election. She brought her evidence to the AG’s office – in other words, Bryan – an’ got the high hat. The guy who prosecutes vote fraud got evidence of vote fraud dumped in his lap an’ didn’t do anything about it. So Cloud instead hired up a lawyer and sued this guy Leger, an’ after a whole buncha back an’ forth in the courts she won. At that point the local DA woke up an’ took up the case, at which point Leger saw which way the wind was blowin’ an’ copped a plea.

That case don’t look so good on Bryan. Not if he wants to be a registrar of voters.

So why would he want Bryan an’ not Bones?

What’s he got against a black dude? Not white-privileged enough?

Take all this for what you want. Seems kinda clear what’s goin’ on for those of us who are down with the struggle…

Interested in more news from Louisiana? We've got you covered! See More Louisiana News
Previous Article VIDEO: Jeff Arnold, Butthurt About Stephen Waguespack
Next Article Shut Up About Common Core And Let’s Talk About This…