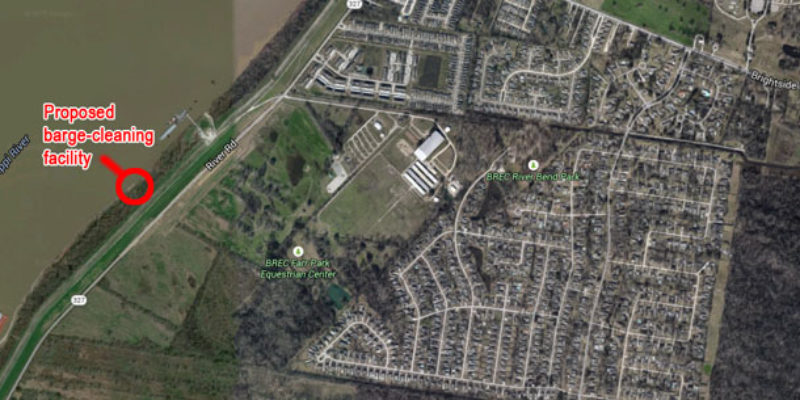 We probably should have posted earlier about the migraine-inducing stupidity of the Tubal-Cain Marine Services barge-cleaning facility proposal along an uninhabited stretch of Mississippi River waterfront south of LSU and the reaction it has generated, but until last night we just didn’t want to bother with it.

But when the mayor of Baton Rouge fired off an angry letter to the director of the Port of Baton Rouge right out of a 1980’s comedy show last night, this story became irresistible.

For those of you outside of town, and even those of you in town who haven’t developed an interest in this donnybrook, Tubal-Cain Marine Services is a Texas company which washes marine vessels for a living. They operate a facility in Port Arthur where people bring barges to be cleaned so they can be used again to transport cargo.

Most often, a barge will carry material which is perfectly innocuous. Once in a while it will carry industrial products, or chemicals or something of that sort.

So at this company’s facility, they have the capability to clean out barges which may have carried sensitive cargo, and they’ll flare off the residue on site.

The Mississippi River being a particularly busy venue for barge traffic, Tubal-Cain has recognized it might be a good idea to open a location along the river and clean barges which go up and down Big Muddy. As a result, they’ve done a deal with the Port of Baton Rouge to build such a facility along the river here.

This is where they’re looking to locate…

As you can see, there isn’t much of anything nearby to the facility. The Riverbend and Beau Pre subdivisions aren’t all that far away, but they’re not that close either. What is close is Farr Park, which is BREC’s horse pasture.

The area Tubal-Cain wants to put their facility is zoned for heavy industrial use, meaning that Baton Rouge’s strategic plan calls for facilities just like it.

So they apply to the state department of environmental quality to build their facility, and not a lot happens. A few people living in Riverbend ask some questions, but it’s no big deal. They’re going to put down a bunch of storage tanks to hold whatever material they’ll be taking out of the barges they clean, and if there is any vapor from the contents of the barges that will be disposed of in an enclosed, not open, flare.

This isn’t a chemical plant. It’s a place where they’re cleaning out barges. It’s an industrial facility, but it’s about as ho-hum as you can get. DEQ agreed, and classified the proposed facility as a “minor source” of air pollution.

And then last week, the Louisiana Environmental Action Network, which is the same outfit responsible for the headshake-inducing anti-fracking asshattery in St. Tammany, staged a dog-and-pony show at LSU to howl about how the facility was going to kill everyone within a 10-mile radius, or something. Meanwhile, LSU president F. King Alexander, who never seems to miss an opportunity to mug for a camera and insert himself into a controversy, held forth about how someone cleaning barges four miles away could disrupt the gender studies department, or something.

And now the predictable shitshow has begun.

First was the fanatic panicking by the local residents. Then came the attention-whore politicians, with an old favorite serving as drum major for the parade…

Councilman John Delgado said he and Mayor Pro Tem Chandler Loupe will propose re-zoning the area across from Farr Park. Currently, the property is zoned for industrial use. The councilmen would change the zoning to commercial, prohibiting Tubal-Cain Marine Services from building its cleaning operation on the site.

“We need to bring in people who are going to develop the riverfront for its beauty, not as a place to dump chemicals or to clean off barges or to pollute the environment,” Delgado said. ” It would be more fitting for an area that’s right next to a neighborhood.”

So in other words, we’ll have a major source of legal pollution – a re-zoning of heavy industrial land which destroys contracts in place for more than a year and a half and lays waste to sizable investments already made, placing the entire matter into the court system for years to come and interfering with the local economy – in order to fight off a minor source of air pollution.

And when Delgado and Loupe rolled out their special kind of stupid, the director of the Port of Baton Rouge (which would be the landlord for the Tubal-Cain facility) issued forth a public groan to the effect that he’s beset by morons on all sides.

“This is just absolutely blowing this thing entirely out of proportion,” says Port Director Jay Hardman. “I’ve never seen anything like it. We’ve always been very sensitive to nearby residents (when considering potential lease offers on this property) and we’ve said no before to potential tenants. But I would have never thought this operation, with the modern technology they use, would cause this much controversy. I’m just taken aback by it.”

Hardman says he believes the concern over the proposed facility is overblown and that Tubal-Cain would not be doing anything on the river to potentially harm people in the area. He says the company has done everything correctly since it began dealing with the port in October 2013. That’s when it first expressed an interest in leasing the 2,700 linear feet of batture property.

The property is zoned M2, or heavy industrial, and has been owned by the port for decades. According to the Planning Commission, the site has been zoned M2 since at least the 1950s. Hardman says the deal with Tubal-Cain was attractive to the port for a couple of reasons. First, the site has been difficult to lease over the years because it’s several miles down river from the hub of barge activity. Second, the terms of lease Tubal-Cain agreed to are favorable to the port—$120,000 a year.

The lease terms were finalized in late 2013 and Tubal-Cain spent 2014 obtaining necessary permits from the U.S. Army Corps of Engineers and the Pontchartrain Levee District. It did not need any permits from the city-parish and the proposed use was compatible with the M2 zoning. Tubal-Cain also consulted with the U.S. Fish and Wildlife Service over a nearby bald eagles nest to ensure the proposed project would not interfere with the federally protected species.

“They’ve spent a lot of money to do this thing correctly,” Hardman says. “You’d never even know it was there. We really thought this would be a great fit.”

Which leads us to yesterday’s piece de resistance – the arrival of Baton Rouge’s mayor onto the scene with a strongly-worded letter.

But when Kip Holden prepares such a missive, it appears he avails himself of corn liquor, or perhaps a Big Ass Beer… 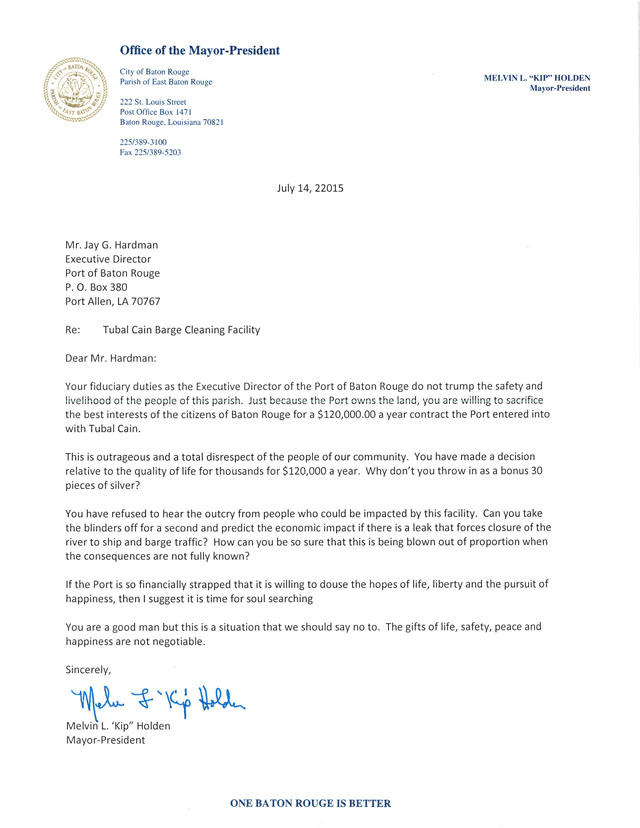 Life, liberty and the pursuit of happiness, indeed! Can anyone wait for Holden’s upcoming campaign for Lt. Governor to unfurl? He’s sure to collect the votes of all the denizens near the proposed boat-wash – human and equine alike.

As for Delgado, we look forward to seeing the same vituperative reaction when someone proposes a car wash near LSU. He’ll certainly be ready with TV cameras and press releases at hand to save his constituents from the hazards of commerce.

Interested in more news from Louisiana? We've got you covered! See More Louisiana News
Previous Article CASSIDY: Let Patients Have The Power, Not Bureaucrats
Next Article SADOW: It Is Now Time For Louisiana’s Own Public Breastfeeding Controversy