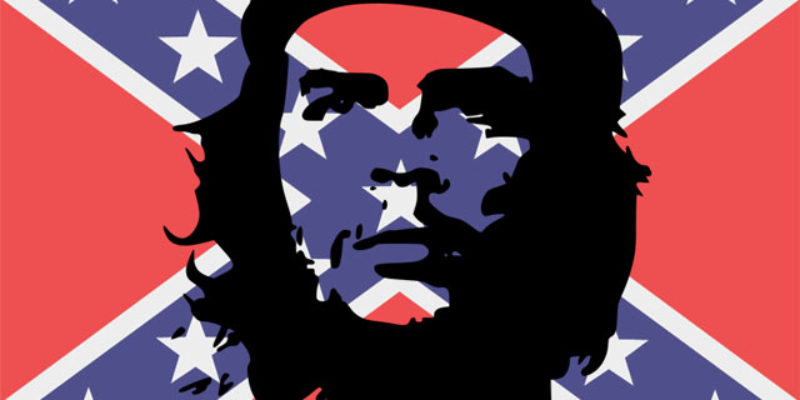 On a family trip to Atlanta in back when I was 8 years old we stopped at a Stuckey’s for some refreshments. My father, looking to reward my uncharacteristically good behavior on the long road trip, offered to pay for whatever I wanted in the story for $5 or less.

On a table I saw a nylon 3’ x 5’ Confederate battle flag and for whatever reason I wanted to buy that.

With the brouhaha over all things Confederate that has reached unparalleled lengths of absurdity even in this Caitlyn Jenner ESPY society, I tried to go back to what I was thinking while looking at the flag in that roadside convenience store in rural Georgia.

Did I want the flag because it looked nice? Or was it because it was the same pattern that was painted on the roof of the General Lee on what was then one of my favorite television shows? Or was the young Michael cognizant of the concept of “regional pride,” as the South was the only part of America I had seen until I boarded an airplane to DC 8 years later?

I could tell you what it wasn’t about: racism.

What little I knew about the Klan was gleaned from scenes from the third installment of the Smokey and the Bandit movies and the Richard Pryor film Bustin’ Loose. And even as a kid I knew the men in the white sheets were the bad guys.

When we returned my father tacked the red banner with a blue cross on my bedroom wall next to the Brazilian flag that my uncle had bought for me while living in South America. Nobody thought anything of it.

On my last day of third grade our Ole Miss educated homeroom teacher had a parting gift for her students- small rebel flags on sticks.

My classmates, black and white, had a blast running around the playground with them during recess, jumping over obstacles while making sounds like the General Lee’s horn from the Dukes of Hazzard.

There was no politics. No racism.  Just a bunch of children having fun with no concept of bigotry, something that the late Nelson Mandela rightly said was something that had to be learned as people are not born with such views.

Today, this educator would have likely have faced the same punishment had she distributed cigarettes or booze to us instead of the battle flag of the Confederacy.

How did something that was once flown from buildings in downtown Atlanta in the 1980s and was part of the background of the first Time magazine cover to feature Jimmy Carter in 1971 all of a sudden become the equivalent of the Nazi flag on the 150th anniversary of the end of the Civil War?

Twenty years ago it was not viewed by the general public as a symbol of white supremacy or treason yet today it is held in such contempt that a television channel had pulled a series because the featured vehicle sports it, National Parks ended their longstanding practice of selling them in gift shops and perhaps in the most ridiculous reaction yet, professional golfer Bubba Watson announced that he was having one of the defining traits of the original General Lee 1969 Dodge Charger that he HAD to buy painted over in the same tweet that he also declared “all men ARE created equal,” the emphasis on the verb being Bubba’s.

Was this concept lost on him when Watson originally purchased the collector car and that he once took great pride showing off?

It’s obvious in this socially correct era where athletes dance on the same strings of media sensitivity as elected officials and every aspect of American society has been politicized to the detriment of those who will not conform to the party line, that Watson was trying to dress up his “business decision” in lofty sentiments.

Bubba looked sanctimoniously silly.   Had he simply painted a white square over the Battle Flag he would have at least been honest.

The media and the political left have exploited the deaths of black church members to redefine something that might not have been celebrated by all segments of the country but was largely tolerated without much controversy.

If America is going to allow its laws, liberty and what is socially acceptable to be encroached by the actions of mad men then we have lost not just our way but our minds as well.

And if we are to bowdlerize offensive symbols then I suppose Hogan’s Heroes will never be aired again. The World War II German POW camp comedy featured men in full Nazi uniform, some of whom were Jewish including Werner Klemperer, who won two Emmys for playing the Stalag 13 commander Colonel Klink.   Klemperer reportedly had an arrangement by which his character always had to come off as a boob so as not to glorify the Third Reich.

Mel Brooks, one of the greatest comedic geniuses alive, somehow managed to work in Hitler into four of his movies and it’s unlikely that any of those four comedies could be produced again today.

In a world where we have several hundred television channels and cyber-shopping malls, it is amazing that we have allowed the state, big media and big retail determine what we are not allowed to watch or buy anymore.

It’s not enough to simply change the channel when the General Lee is outrunning Rosco P. Coltrane, we need Viacom to keep it off the air. And we cheer when transnational retailers that shamelessly peddle Che Guevara t-shirts ban anything with a Confederate flag from commerce.

Perhaps el Che does not mind that his image is bringing revenue to capitalists as American society overall is being stampeded in his direction.

Interested in more national news? We've got you covered! See More National News
Previous Article Jim Hawthorne’s Replacement Shows His Ass In The Wake Of The Chattanooga Massacre
Next Article AFTERBURNER: Should Conservatives Take An Ax To The Military Budget?