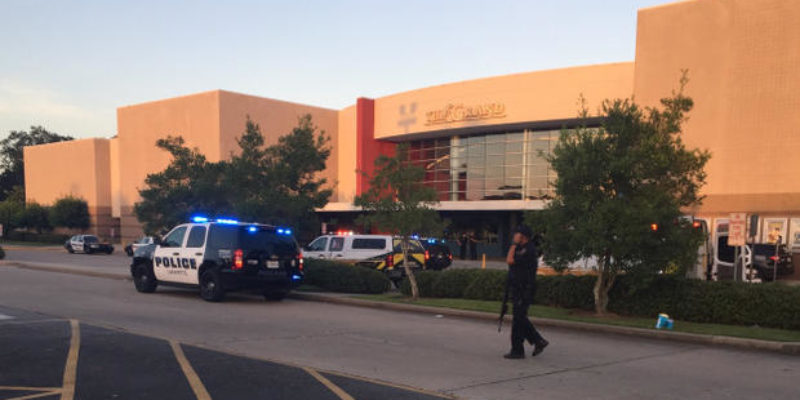 A shooting at a Lafayette, La. move theater is being investigated by Louisiana State Police.

Gov. Bobby Jindal (R-LA) confirmed about an hour ago that a shooting had broken out in a Grand Theater in Lafayette. The gunman reportedly fired about six gunshots and then turned the gun on himself.

Roughly 8 people are reportedly injured and one person, besides the gunman is apparently dead, according to the Associated Press.

Update: At least 10 people have been taken to the hospital for gunshot wounds, according to the Associated Press.

Update: Woman in the movie theater described an older white male shooting in the theater, though no one was really screaming, according to media reports.

Update: It has been three years and three days since the last movie theater shooting in the country.

Update: This is a live witness report of the Lafayette movie theater shooting. 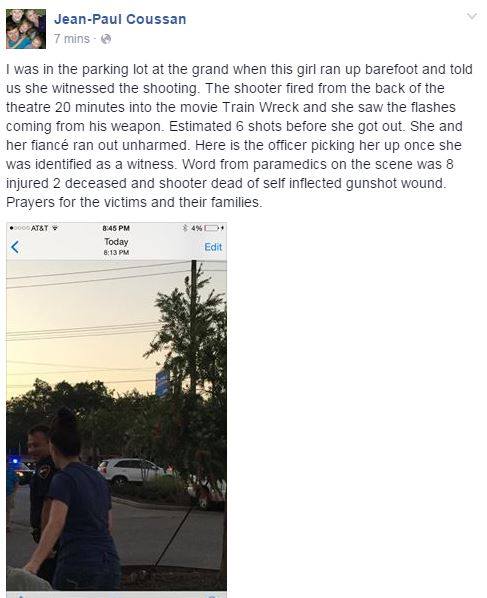 Update: The shooting occurred during the movie showing of Amy Schumer’s “Trainwreck,” which is a crude comedy film.

Update: Lafayette Police Chief says he is currently working with his police staff to find out if his officers were involved in taking down gunman, though it has been reported that the gunman shot himself.

Update: Previous media reports of ten people being injured were false. Associated Press reporting that six people have been injured in the movie theater shooting.

Update: Some media outlets are claiming that Lafayette Police Chief said they do not yet know the number of fatalities, though it has been reported that two are dead, including the gunman.

Update: The shooter was not active when the Lafayette Police Department showed up to the movie theater, some media reports claim.

Update: Three people, including the victim have died in the movie theater shooting, according to the Acadiana Advocate.

UPDATE (9:39 p.m.) – Of course it goes political, and of course it’s the usual suspects making it so…

.@RepBoustany @LafayettePD_LA Why don’t you just let them do their jobs – and you do yours, like strengthen background checks?

Mann’s Twitter is an explosion of the typical gun-grabbing ghoul response to mass shooters, and verbal assaults on Bobby Jindal.

UPDATE (9:56 p.m.) – There’s a press conference going on, and nothing much new has come out of it other than that there are eight people in the hospital with conditions described as ranging from non-life threatening to critical, meaning the death toll could rise.

UPDATE (10:04 p.m.) – From the presser, the weapon was a handgun but we don’t know what make. Also, no determination of whether this was a domestic situation – there are social media rumors that this centered around a man who wanted to kill his wife, but there’s no confirmation of any of that – or something else.

The identity of the shooter is known, but not released. He’s 58 years old. 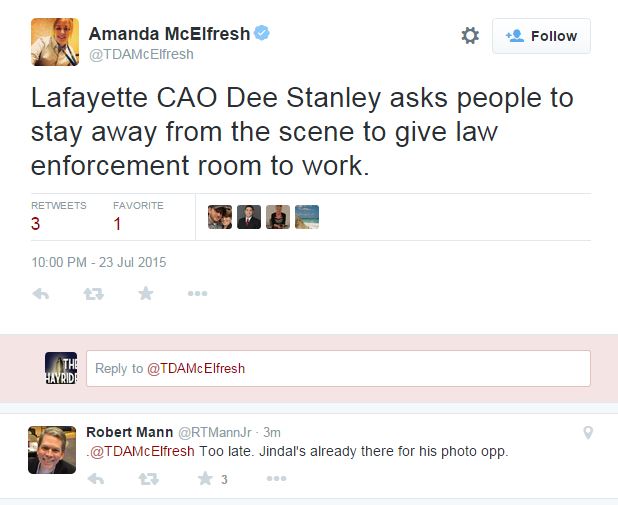 UPDATE (10:18 p.m.) – Charles Boustany is the congressman from Lafayette. His statement on the shooting…

“I’m saddened at the terrible loss of life represented in tonight’s tragic shooting at a movie theater in my hometown of Lafayette. Bridget and I are praying for the families and friends of the victims at this difficult time. I will work with the Lafayette Police Department, local, state, and federal officials to get to the bottom of what happened tonight.”

“Please join Sharon and me in prayer for the shooting victims at the Grand Theatre in Lafayette. May God comfort them, their families, and our first responders in this difficult time.”

That’s a Lafayette Police car and a Lafayette Sheriff’s Department car in a wreck on the way to the scene.

UPDATE (11:03 p.m.) – More about this bomb scare near the movie theater, which looks like a false alarm…

UPDATE (11:07 p.m.) – Maybe Bob Mann should write for Buzzfeed. Or perhaps not – it seems Buzzfeed does have some standards.

UPDATE (11:22 p.m.) – A second press conference is going on and Jindal is speaking. He’s telling the story of a couple of teachers who were at the movie and one jumped on top of another one to take a bullet that otherwise would have hit the latter in the head. Both were shot, but the latter took a non-life threatening bullet in the leg and managed to pull the fire alarm.

They’re asking people to stay away from the area on the way to work in the morning.

Col. Mike Edmonson of the state police, addressing the bomb threat, said that police dogs hit on a backpack in the theater and the Haz-Mat team was called in as a result.

One victim has been released, apparently. But another “was in surgery, and not doing well.”

UPDATE (11:33 p.m.) – Jindal tells the story of the heroic teachers, and then this happens…

Meanwhile, it appears the ghoulishness among the LSU faculty hasn’t gone unnoticed…

UPDATE (11:55 p.m.) – We hate to make this about Bob Mann, but the barrage of tweets before the bodies are even cold and while victims are fighting for their lives in the hospital is really amazing…

UPDATE (12:28 a.m.) – We’re going to pick this back up in the morning as developments dictate.

There seems to be a controversy of no small size brewing, in that law enforcement officials in Lafayette don’t want the shooter’s name revealed before they’ve had a chance to clear his house, talk to his friends and so on. And yet someone leaked a name to the Advocate’s New Orleans Bureau crime reporter, who tweeted it. The police chief in Lafayette and Edmonson were both very upset about that, though their statements made it sound like they didn’t want to go too far in giving that leak credence at this point.

Perhaps that will be resolved overnight and we’ll be able to find out more about the shooter and why this happened.

Check back with the Hayride for updates from every news outlet and live Twitter updates.