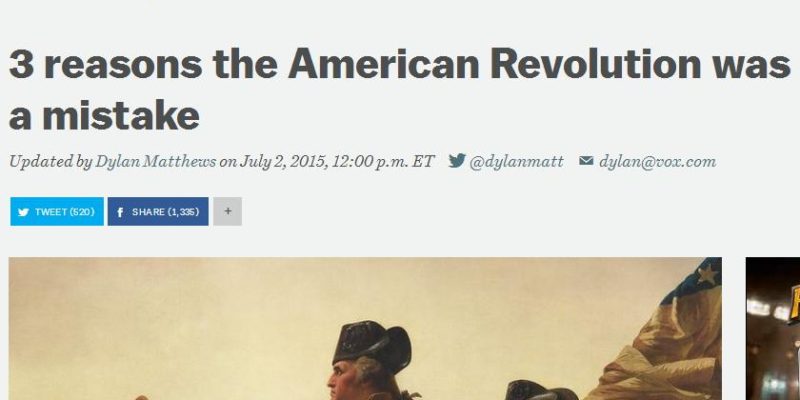 Just in time for the 4th of July, the Left is showing its true colors, and they are not red, white or blue.

As the Left attempts to degrade and strip history away from American public spaces, libraries and museums, they are now coming out against the American Revolution altogether.

In a new article by Vox, liberal writer Dylan Matthews explains three reasons why the American Revolution was a mistake.

Here, we are going to give you a glimpse into the mind of the contemporary liberal, where the American Revolution is seen as a problem, but Che Guevara is an icon.

Vox’s first argument against the American Revolution is that abolition would have come faster without American independence. Here’s what Matthews writes:

The main reason the revolution was a mistake is that the British Empire, in all likelihood, would have abolished slavery earlier than the US did, and with less bloodshed.

Abolition in most of the British empire occurred in 1834, following the passage of theSlavery Abolition Act. That left out India, but slavery was banned there too in 1843. In England itself, slavery was illegal at least going back to 1772. That’s decades earlier than the United States.

This alone is enough to make the case against the revolution. Decades less slavery is a massive humanitarian gain that almost certainly dominates whatever gains came to the colonists from independence.

The second point Matthews makes is that the American Revolution was bad for Native Americans. But, religious persecution in Britain was apparently no big deal. Here’s an excerpt:

Starting with the Proclamation of 1763, the British colonial government placed firm limits on westward settlement in the United States. It wasn’t motivated by an altruistic desire to keep American Indians from being subjugated or anything; it just wanted to avoid border conflicts.

But all the same, the policy enraged American settlers, who were appalled that the British would seem to side with Indians over white men. “The British government remained willing to conceive of Native Americans as subjects of the crown, similar to colonists,” Ethan Schmidt writes in Native Americans in the American Revolution. “American colonists … refused to see Indians as fellow subjects. Instead, they viewed them as obstacles in the way of their dreams of land ownership and trading wealth.” This view is reflected in the Declaration of Independence, which attacks King George III for backing “merciless Indian Savages.”

Finally, the last reason the American Revolution sucks is perfectly in-line with what the Left already believes, which is that capitalism is the root of all evil. According to Matthews, America would have been way better off if we’d stuck with Britain. Read this:

Honestly, I think earlier abolition alone is enough to make the case against the revolution, and it combined with less-horrible treatment of American Indians is more than enough. But it’s worth taking a second to praise a less important but still significant consequence of the US sticking with Britain: we would’ve, in all likelihood, become a parliamentary democracy rather than a presidential one.

And parliamentary democracies are a lot, lot better than presidential ones. They’re significantly less likely to collapse into dictatorship, because they don’t to lead to irresolvable conflicts between, say, the president and the legislature. They lead to much less gridlock.

In the US, activists wanting to put a price on carbon emissions spent years trying to put together a coalition to make it happen, mobilizing sympathetic businesses and philanthropists and attempting to make bipartisan coalition — and they still failed to pass cap and trade, after millions of dollars and man hours. In the UK, the Conservative government decided it wanted a carbon tax. So there was a carbon tax. Just like that. Passing big, necessary legislation — in this case, legislation that’s literally necessary to save the planet — is a whole lot easier with parliaments than presidential systems.

The only positive point to come out of such a disgraceful from a mainstream media outlet is that the Left is finally not even trying to masquerade their hate for America. They’re outright saying it.

That’s fine. Now, let’s make sure Hillary Clinton is asked if she agrees with these statements.