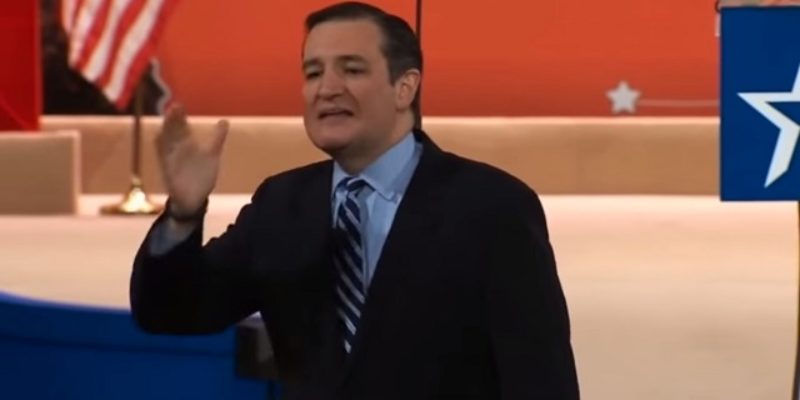 A couple of weeks ago Gavin McInnes said on Greg Gutfeld’s show that Donald Trump was just a giant snowplow clearing the way for Ted Cruz to be president.

This video gives a window into how that could be possible, with particular respect to the immigration issue Trump scored with.

In it, Cruz delivered a masterful takedown of Sarah Saldaña, Assistant Secretary U.S. Immigration and Customs Enforcement at yesterday’s Senate hearing on sanctuary cities and the Kate Steinle murder (and the other murders committed by criminal illegal aliens). It goes about eight and a half minutes and it’s tremendous stuff…

We talked about this whole subject of criminal illegal aliens and how Trump raised it last night on the Red Bayou Show, which will be up shortly, and my take on it was that Trump actually stumbled on the issue amid a fairly unstructured rant of a campaign announcement speech rather than doing anything politically brilliant with it – and as proof of that I’d offer the sloppy way he raised the issue by accusing the Mexican government of “sending” rapists and drug dealers across the border.

The issue became a big deal when Trump got accused of racism for making the statement and a whole bunch of corporate deals he’d made – Macy’s, Univision and so forth – went by the wayside as a result. But then the Kate Steinle murder happened and gave flesh to what Trump was saying. It was almost manna from heaven for Trump, because prior to all of this the only way the media would allow you to raise the immigration issue was to discuss it “comprehensively” – which is the Democrat and U.S. Chamber of Commerce formulation of the issue.

And essentially, “comprehensive” immigration reform is a lot like a fire in the Five Points…

In other words, it’s all about a lot of free political swag for folks who have limited interest in actually solving the problem if at all.

Trump comes along and inartfully raises the question of why we have to put up with criminals coming across that border, and events make the issue even more prominent and define it in a way Trump didn’t even do, and that gives him a way to glom onto it and ride it to the top of the polls for awhile.

That probably won’t last, but the issue is going to stay hot – and in the manner it was raised, however sloppily, by Trump. Now it’s about who will secure the border and get rid of all the criminals who shouldn’t be here.

Cruz has been saying a lot of the same things Trump has on the border issue, but of course Cruz is too “out there” as a conservative to get the nomination.

Not anymore. Trump created the issue as a means to win the nomination and next to Trump Cruz is the strongest advocate of shutting that border down – which can only help him.

And yesterday he had an opportunity to indict the Obama administration not just on being unhelpful in solving the policy problem of securing the border but on the basic problem of its refusal to even do its job and implement the current policies. Cruz, compared to Trump, looks statesmanlike and resolute and perhaps even presidential on the issue.

And nobody is interested in bringing up amnesty as part of the immigration debate right now. It’s all about stopping the terrorists and murderers from coming here and wreaking havoc as the Obama administration – as will certainly whatever Democrat administration which might follow it – has refused to do.