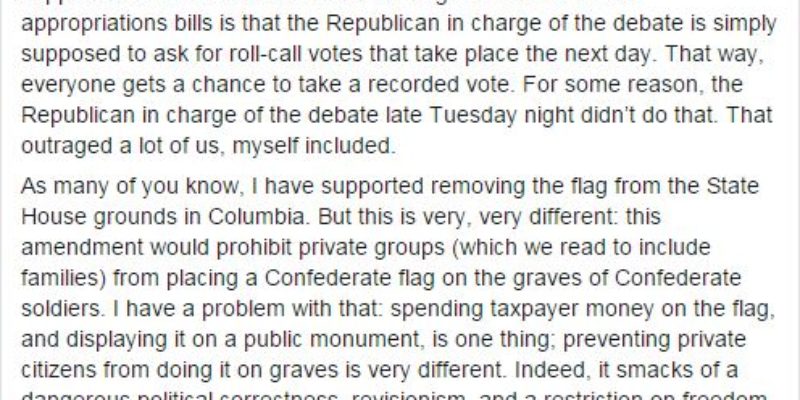 Our readers might have noticed that the ongoing Democrat jihad against the Confederate States of America, which ironically was a wholly-owned project of the Democrat Party, made it onto the floor of the House of Representatives last night and is the subject of persistent howling today.

The Hill has a writeup on the particulars…

House GOP leaders abruptly canceled a vote Thursday on a spending bill for the Interior Department amid an intraparty split over the display of the Confederate flag.

The bill was pulled after the House moved to vote on an amendment to the measure that would continue to allow the Confederate flag to be displayed in certain federal cemeteries.

“Don’t Republicans understand that the Confederate battle flag is an insult to 40 million African Americans and to many other fair-minded Americans?” Congressional Black Caucus Chairman G.K. Butterfield (D-N.C.) said on the House floor.

A series of Democrats went to the floor to denounce the vote, which they noted would take place the same day that South Carolina’s House had voted to remove the Confederate flag from its state capitol grounds.

Today, the Democrats have continued to make a stink about the Confederate flag, with Nancy Pelosi going so far as to try to ban the state flag of Mississippi from display anywhere on the House side of Capitol Hill since that flag has the confederate flag in it.

They’re having a field day, and the House GOP leadership is, as usual, tripping over its shoelaces in an attempt to get out of the confederate flag mess.

On Facebook today, Rep. Mick Mulvaney (R-South Carolina) gave some perspective to what the amendment in question was actually about… 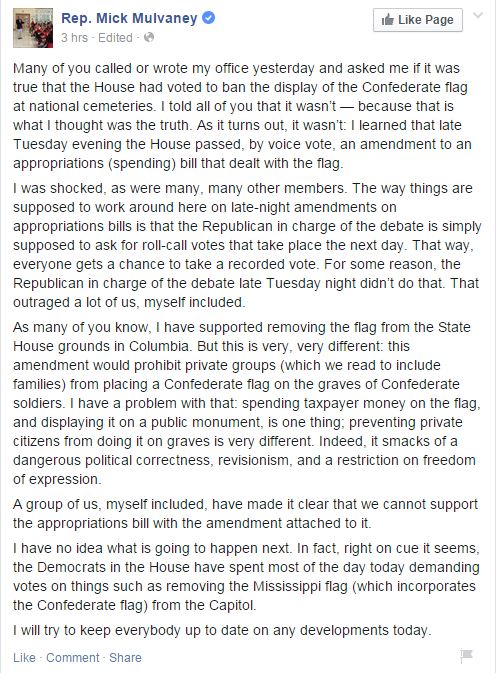 So the issue isn’t that the GOP wants to fly confederate flags at national parks. What the Democrats were trying to do was make it so the Park Service would prevent the families and descendants of Confederate soldiers from displaying the flag at their graves at the battlefield monuments at Vicksburg and Andersonville.

We should probably see a bill moving those sites out of Park Service control and giving them to their respective states.

But all this screaming and howling was about not a bill, but an amendment. What was the bill in question?

It was an appropriations bill for the Department of the Interior. And in it are real, substantive cuts which would make a significant difference in how much predatory regulation the EPA would be able to engage in. To wit…

Environmental Protection Agency (EPA) – The bill funds the EPA at $7.5 billion, a reduction of $717 million – or 9 percent – below the fiscal year 2014 enacted level. Administrative funding for the agency is cut by $24 million, including a 50 percent reduction to the Office of the Administrator, the Office of Congressional Affairs, and the Office of the Chief Financial Officer. In addition, staffing levels at the EPA are held to 15,000, the lowest level since 1989. These reductions will help the agency streamline operations, and focus its activities on core duties, rather than unnecessary regulatory expansion.

The legislation also includes provisions to stop various harmful, costly, and potentially job-killing regulations by the EPA. For example, the bill prohibits the EPA from implementing new greenhouse gas regulations for new and existing power plants, changes to the definition of “navigable waters” under the Clean Water Act, and changes to the definition of “fill material.” The bill also includes policy provisions to protect the privacy of dairy and livestock farmers’ personal information, and to prevent the EPA from regulating the lead content of ammunition and fishing tackle.

In other words, the Democrats cooked up the confederate flag issue as a means of creating a poison pill amendment to stop the House from slashing the EPA’s budget and stopping it from making your light bill shoot up or declare a drainage ditch on your land a navigable waterway it could then dictate the use of to you.

They ginned up a thoroughly bogus legislative controversy, riding atop an ongoing cultural fight, in order to preserve government overreach.

Yes, the GOP is the Stupid Party, and especially in this instance for allowing the legislative process to be short-circuited by such a clownish distraction. But let’s not forget the other side of that old saw – which is that the Democrats are the Evil Party, acting in bad faith to attack your freedom to make a living and be left alone.