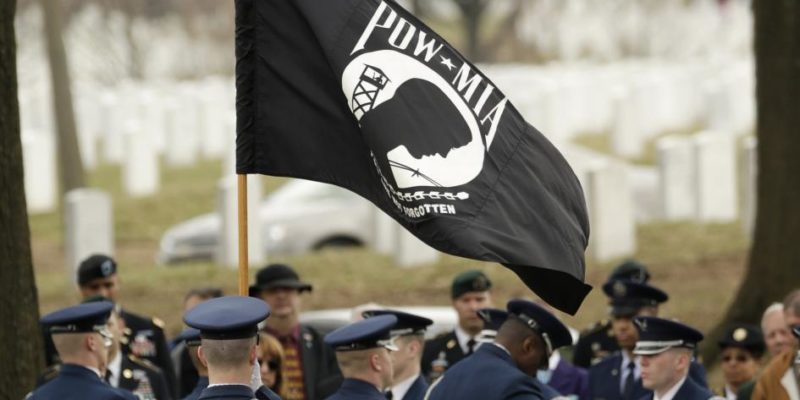 In a new column in Newsweek, writer Rick Perlstein discusses a flag that has vile, vitriol and hate written all over it. But, he’s not talking about the Confederate flag this time, he’s talking about the POW/MIA flag.

In the piece, Perlstein claims that the flag is apparently racist against North Vietnamese people because the flag came into existence when news broke that American soldiers were being tortured by the Vietnamese during the Vietnam war.

Naturally, Perlstein does not go into detail about why exactly the flag is racist, leaving readers to assume that it is racist because it somehow discriminates against Vietnamese people, which makes no sense whatsoever.

The most pathetic part about all of this is the fact that a column that is so despicable, disrespectful and hateful towards American Vietnam war heroes is actually published online in a so-called ‘respected’ journalism outlet like Newsweek.

Vietnam veterans, though, are used to getting spit on by liberal hippies. When many of the veterans returned home during the war, they were treated horribly by anti-war hippies, the same types who now run our public universities.

And as we see, these liberal hippies are still disrespecting Vietnam veterans, except now it is through the media.

Not only is it offensive to our Vietnam war veterans, but also to their families and the veterans of all war in the country who bravely risk their lives only to come back home and be written about in so-called ‘respected’ journalism outlets as though their efforts for our freedoms mean nothing.

This ridiculousness comes after left-wing activists and the NAACP have declared all things related to the Civil War and the Confederacy ‘racist.’

Here in New Orleans, Mayor Mitch Landrieu has jumped on board, demanding four high-profile Civil War landmarks be removed because they apparently “divide” the city, rather than bring the city together.

Ironically, the only thing dividing the city is Landrieu’s attempt to remove the monuments, which has made race relations in the city as bad as race relations across the country and divided the city into either pro-monuments or anti-monuments categories.

As conservatives and historians have said from the beginning, once the country begins to rid everything that some fringe groups find ‘racist’ or ‘hateful,’ it is a slippery-slope.

This is what we are now seeing with the hateful statements made against a symbol of our most beloved veterans who died in the Vietnam war.

It is truly a travesty.

Editor’s Note: This post is dedicated to all our veterans who fought and continue to fight for freedom. Thank you.

Interested in more national news? We've got you covered! See More National News
Previous Article Here’s An Interesting Petition Drive About Getting The Able-Bodied Off Of Food Stamps
Next Article They’re Going To Have To Find Someone Other Than This Woman To Run…