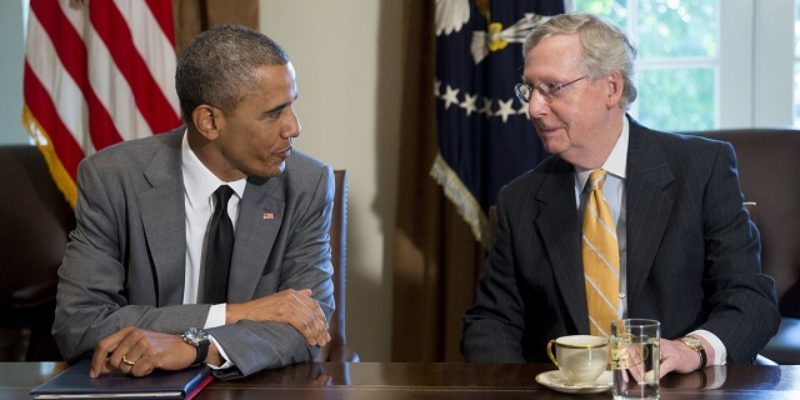 Surprising no one at all, the Senate failed to clear a procedural vote to break the filibuster and end debate on a standalone bill to defund Planned Parenthood. There was one Republican defection, Senator Kirk of Illinois, and two Democrats who crossed over to to the Republican side. Mitch McConnell, who brought this farce to the floor, also voted against it, but in his defense (I won’t do this often, so don’t troll this post too hard) it was a procedural “No” that would allow him to bring it to the floor later.

There is an argument to be made for a stand-alone Planned Parenthood bill, mind you. Getting Democrats on the record at a time when progressively worse videos featuring Planned Parenthood’s barbaric practices is a relatively good thing for Republicans, and any campaign worth its salt should be cutting those ads right now. However, that is a political issue.

Mitch McConnell isn’t just doing fiddling while Rome burns, here – he is actively throwing gasoline onto the flames. The vote today shows us two things. The first is that Mitch McConnell really has no idea how to handle his caucus and get his house in order. That is not the most dangerous issue here. His leadership style, described so adequately by Ben Domenech at The Federalist as “The Yips“, is… well, he doesn’t have one. There is nothing that he brings to the table that is worth keeping him in leadership. If he had any idea on how to run his caucus, he would have given them the addition of a PP amendment to the highway bill. Instead, he forced it down and set up a show vote, thinking people would be happy.

The second thing that today’s vote showed us is the real issue here: Mitch McConnell is providing cover for Democrats who are okay with the savage butchery offered at Planned Parenthood. The political opportunity to get them on the record is one thing, but to make them choose between their constituencies’ pet projects – make no mistake, that is what the highway bill really is – and the annihilation of human life at Planned Parenthood is a no brainer if you fit the bill of a pro-life politician.

But, let’s be honest. Republicans in office have spent the last seven years running away from any and all social issues in order to make themselves feel like they appeal to a wider ranger of voters. “Surely they’ll love us now!” they think when they give up on gay marriage and abortion. But, the sad reality is that those social issues help them more than they hurt them.

McConnell also has one major fear – government shutdowns. The mere hint of one makes McConnell wet himself. This gives the Democrats leverage in any and all contests of strength between the two parties. He is ceding the political high ground to the Democrats and getting nothing out of it, not even strategically.

After he trounced Matt Bevin in the Kentucky primary, I urged fellow Republicans not to toss the baby out with the bathwater. Under no circumstances should we ever consider a Democrat over a Republican to be a better option.

I have since changed my mind.