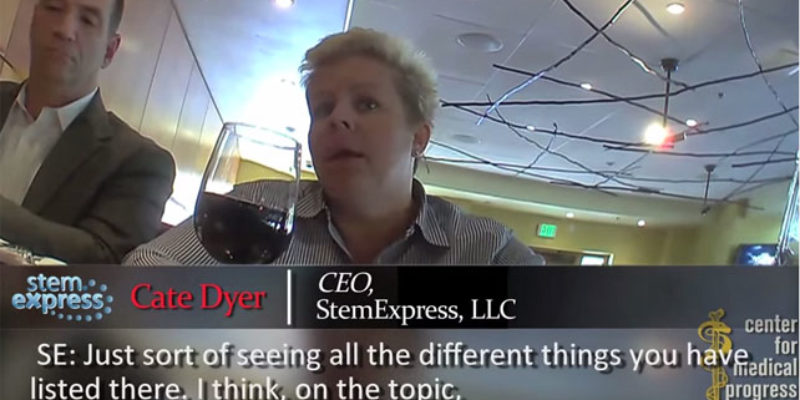 Watch it, and you’ll understand why. CMP took StemExpress’ CEO Cate Dyer to lunch, and managed to extract the kinds of statements from her that will likely ruin that company.

The part in which she laughs and jokes about shipping the heads of babies to research labs in certain ways so the technicians don’t “freak out” about what they see when they open the package is especially damaging.

From the press release accompanying the video…

The eighth video in the ongoing controversy over Planned Parenthood’s sale of aborted fetal body parts shows the CEO of StemExpress, LLC, a major buyer of fetal tissue from Planned Parenthood, admitting the company gets “a lot” of intact fetuses, suggesting “another 50 livers a week” would not be enough, and agreeing abortion clinics should profit from the sale:http://www.centerformedicalprogress.o…

StemExpress is a for-profit biotech supply company that has been partnered with Planned Parenthood clinics across the country to purchase human fetal parts since its founding in 2010. StemExpress’ Medical Director, Dr. Ronald Berman, is an abortion doctor for Planned Parenthood Mar Monte.

In the video, actors posing as another human biologics company meet with StemExpress CEO Cate Dyer, plus Vice President of Corporate Development and Legal Affairs Kevin Cooksy, and Procurement Manager Megan Barr. StemExpress and the actors are discussing a potential partnership to supply extra fetal body parts to each other.

“So many physicians are like, ‘Oh I can totally procure tissue,’ and they can’t,” expresses Dyer, seeming to indicate that abortion doctors must do the procedure in a special way to obtain useable fetal parts. Federal law requires that no alteration in the timing or method of abortion be done for the purposes of fetal tissue collection (42 U.S.C. 289g-1).

“What about intact specimens?” asks one of the actors. “Oh yeah, I mean if you have intact cases, which we’ve done a lot, we sometimes ship those back to our lab in its entirety,” replies Dyer. “Case” is the clinical term for an abortion procedure. An “intact case” refers to an intact abortion with a whole fetus. “The entire case?” asks an actor. “Yeah, yeah,” says Dyer. “The procurement for us, I mean it can go really sideways, depending on the facility, and then our samples are destroyed,” she explains past botched fetal dissections, “so we started bringing them back even to manage it from a procurement expert standpoint.”

Feticidal chemicals like digoxin cannot be used to kill the fetus in a tissue procurement case, so a fetus delivered intact for organ harvesting is likely to be a born-alive infant.

“What would make your lab happy?” asks one of the actors. “Another 50 livers a week,” says Dyer. “We’re working with almost like triple digit number clinics,” Dyer explains, “and we still need more.” She later notes, “Planned Parenthood has volume, because they are a volume institution.”

Dyer also agrees that payments to abortion clinics for fetal body parts should be financially beneficial to them. “Do you feel like there are clinics out there that have been burned, that feel like they’re doing all this work for research and it hasn’t been profitable for them?” she asks. “I haven’t seen that.” StemExpress publishes a flyer for Planned Parenthood clinics that promises “Financial Profits” and “fiscal rewards” for clinics that supply aborted fetal tissue. It is endorsed by Planned Parenthood Mar Monte Chief Medical Officer Dr. Dorothy Furgerson:http://www.centerformedicalprogress.o…

The sale or purchase of human fetal tissue is a federal felony punishable by up to 10 years in prison or a fine of up to $500,000 (42 U.S.C. 289g-2). The Sacramento Business Journal reported in June that StemExpress has an annual revenue of $4.5 million.