Pew Research Center has come out with a poll last week that shows 24% of all Americans view both the Republican Party and the Democrat Party unfavorably. 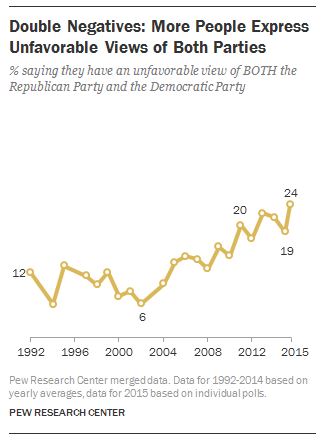 The reason why that number has spiked, Republicans and Republican-leaning independents who are dissatisfied with the Republican Party.

Yet the rise in frustration with the parties, especially this year, is not the result of an across-the-board increase in negative views. Instead, it is largely concentrated among Republicans and Republican-leaning independents, who have become increasingly critical of the Republican Party.

Why would that be? Because Republican leaders don’t seem to be able to keep the promises they were elected on. Conservatives feel betrayed on issue after issue. They’ve witnessed example after example of Failure Theater from the GOP.

Out of this discontent rises a demagogue, Donald Trump. He’s an outlet for low-info conservatives who can’t beat Boehner and McConnell.

The only way to defeat Trump and other demagogues like him is to give conservatives a reason to support the GOP. Conservatives want action, not talk.