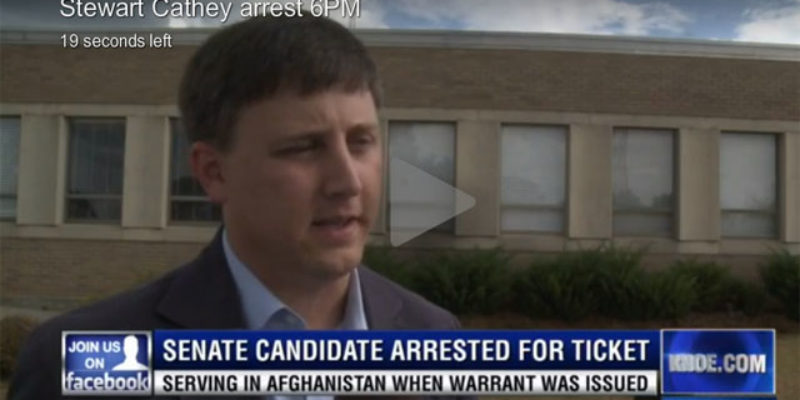 One of the more interesting state legislative races in this current cycle is going on in Monroe, where the Senate seat left open by Bob Kostelka getting termed out is turning into a hot insider-vs-outsider campaign.

The insider is Jim Fannin, the state representative from Jonesboro and a friend of Kostelka’s (the incumbent is endorsing Fannin and supporting him heavily). Fannin, who has served as the chairman of the House Appropriations Committee for the last several years, is at something of a geographical disadvantage. District 35, the Senate district in question, is made up largely out of the “nice” areas of Monroe but stretches to the south down to just north of Alexandria and west into Ruston. Fannin has a huge campaign war chest; after spending $115,000 over the last reporting period he still has some $450,000 left to spend.

And the outsider is Stewart Cathey, Jr., an IT management consultant and retired Army captain who served six years in Afghanistan. Cathey bills himself as the conservative in the race and has been passionate in his criticism of Fannin’s management of the state’s fisc as Appropriations chair. Cathey has about $50,000 left in the bank, almost all of that being his own money, and he’s spent some $85,000 so far.

As one might imagine, the race has become contentious, and there are polls indicating it could go either way.

So last week, when Cathey was arrested and jailed, it was big news in Northeast Louisiana.

KNOE had the story…

District 35 State Senate candidate Stewart Cathey Jr. was arrested Friday for failing to pay a seatbelt ticket he was issued in 2009 by Monroe Police. But, the current holder of that senate seat disagrees.

Cathey says, shortly after getting the ticket, he was deployed with the Army to Afghanistan and he forgot about the ticket. Cathey says the issue never came up when he bought vehicles and renewed his license.

He says his opponent’s supporters raised the issue, and that’s the only reason for the timing of the arrest. Cathey says since he was made aware of the ticket, he has tried to pay all of the associated fines, but says he was not allowed to.

Cathey is running against Jim Fannin. Fannin is an incumbent in the Louisiana State House and is seeking the senate seat. Fannin has not commented yet on the matter.

However, current holder of that senate seat Senator Bob Kostelka responded by saying he has no control over the Monroe City Courts. He agrees this is dirty politics, but orchestrated by Cathey for calling in the media. Kostelka’s full statement is included in this story.

Here was Cathey’s statement after he was arrested…

Let me first say thank you to everyone for being here today to support me. As many of you are now aware, in September of 2009, I was issued a ticket by the City of Monroe for not wearing my seatbelt. Eight short days later, I deployed to Afghanistan as a member of the US Army where I spent the next year fighting for the country we all love and hold so dear.

While I was in Afghanistan, I honestly forgot about my seatbelt ticket, because as one might imagine that was the furthest thing from my mind. My mind was focused on keeping my team mates safe, keeping myself alive and getting back home to my family, just as is the case with any soldier who as every been fortunate enough to wear our nations uniform. Thankfully, the Lord allowed me to come home and gave me the opportunity to find new ways to serve my state and country. Is my serving my nation overseas an excuse, or a crutch, ABSOULTEYLY not, I would never use my service to my nation as an excuse! This is nothing more than me simply forgetting to pay a ticket during a very stressful time in my life.

All of this is what brings us here today, and most likely, were I not a candidate for the State Senate I would never have even remembered that I had been issued a ticket for not wearing my seatbelt.
Had it not been for my opponent and his political supporters and advisors reminding me of this ticket on September 11th, the day after qualifying, and making it an issue in this campaign, I likely would never have even remembered it. Over the last 6 years, I have not received any paperwork documenting that there was ever a warrant. During this time I have been able to renew my driver’s license and purchase vehicles without my license being flagged due to a warrant, nor has anything related to this issue ever come up.

Since being reminded of this ticket by my opponents, I have exhausted all efforts to try to pay the fines or penalties associated with it, because I am admitting I made a mistake, and I want to and am willing to pay any fines in order to make this right as is normally the way a situation like this is handled. But for some reason I am being denied the right to simply pay my fine and penalties, and I am instead being forced to be arrested, and required to bond out over a simple seat belt violation from 6 years ago. It has become apparent to me that my opponents will stop at nothing to protect their candidates and the good ole boy system, even to the point of abusing the justice system.

I hope and pray that the voters of District 35 will not be distracted by this issue, but instead hear my message: Louisiana needs new leadership in Baton Rouge to right the ship from the mess that my opponent has created.

I hope that you, the voters, will understand that while I was serving in combat overseas, the furthest thing from my mind was a seatbelt violation. My full concentration and attention was on my mission of keeping America safe by defeating Al Qaeda and the Taliban, supporting my fellow troops, and coming back home safely. This type of treatment is what we are seeing all over America right now when our service men and women return home from war, and it is another example that we have to support our Veterans, who have sacrificed so much.

What we’re seeing today is the ugly side of politics. People ask me all the time why I’d want to get involved in something so nasty and underhanded.

Ironically, this situation is exactly why I’m running. The career politicians like Jim Fannin will clearly stop at nothing to get back to the good ole boys club in Baton Rouge. We don’t need people who will stoop to such cutthroat tactics. We need real leadership to turn this state around.

Just as I served my country around the world now I want to serve my state in the Senate. I need your support and most importantly I need your prayers. We deserve better than what we’ve had, and I hope you can trust that I’m the man for the job.

Kostelka also put out a statement denying any involvement. “Obviously, I have no control over Monroe City Court or Judge Lee,” he said. “No one attacked this young man and no action was taken because there was nothing to gain from this. I don’t understand why the court wouldn’t give him another court date. Remember, Cathey called the media and staged this with supporters in tow. It is ugly politics but orchestrated by Cathey.”

He also said he’d “heard” that Cathey had outstanding tickets in Tennessee and somewhere else in Louisiana, though one wonders how Kostelka would have known that.

Cathey’s supporters don’t buy it, and radio host Moon Griffon wasn’t buying it either. Griffon posted this to Facebook…

The arrest has been seen among social media commenters mostly as either an excessive case of law-enforcement bureaucracy or an abuse by the Ouachita Parish courthouse gang for political purposes, and it might well end up as a classic case of a dirty trick backfiring.

Kostelka’s accusation that Cathey orchestrated the media attention coming out of his arrest might be a recognition of the potential mess, though he denied any involvement (which no one seems to believe) and why wouldn’t Cathey try to frame media coverage of the arrest for his benefit?

In any case, it does look like we might have a race in District 35 – and Cathey’s arrest might end up an asset in pulling the upset over Fannin.