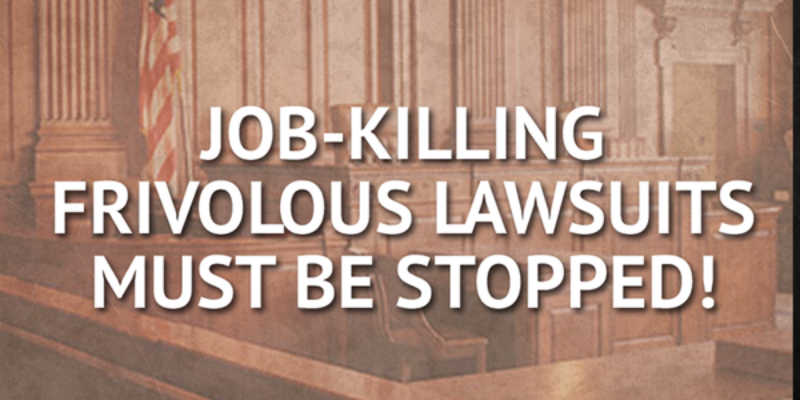 While much of the national media covering Capitol Hill has been focused on the effort to de-fund Planned Parenthood, a much quieter debate has been brewing over the impact of abusive lawsuits in our federal courts.

That debate reached a critical tipping point yesterday when the U.S. House of Representatives passed the “Lawsuit Abuse Reduction Act” (H.R. 758), which seeks to reduce lawsuit abuse by making sanctions against lawyers who file bogus claims mandatory rather than discretionary under the Federal Rules of Civil Procedure. It also would eliminate a lengthy “safe harbor” window that currently allows plaintiffs’ lawyers to withdraw meritless litigation without facing a penalty.

In essence, this legislation sends a clear message to lawyers across the country: meritless lawsuits don’t belong in our federal courts, and if you waste the court’s precious time and resources by filing a meritless claim, you will face the consequences.

Imagine that? Doesn’t it say something remarkable about the overall state of America’s legal system that accomplishing something so simple and straightforward literally requires an act of Congress? But I digress…

LLAW applauds these leaders in the House for passing LARA and encourages the Senate to quickly follow suit.

“Lawsuit abuse is common in America because the lawyers who bring these frivolous cases have everything to gain and nothing to lose. Lawyers can file meritless lawsuits, and defendants are faced with the choice of years of litigation, high court costs and attorneys’ fees or a settlement out of court. This is legalized extortion.”

Indeed, allowing lawyers to profit off of meritless litigation is a gross abuse of the American legal system, and it should be stopped.

For years, legal reform advocates including the American Tort Reform Association and many others have called for the reinstatement of mandatory penalties for lawyers who file baseless claims in federal court. Such common sense measures were in place for years and had proven to be effective in discouraging attorneys from filing bogus lawsuits and reducing unnecessary litigation in general.

That all changed in 1993, when Congress watered down federal rules and procedures designed to hold lawyers accountable for filing abusive claims.

This Congress can and should correct that mistake by passing LARA and sending it to the president’s desk.