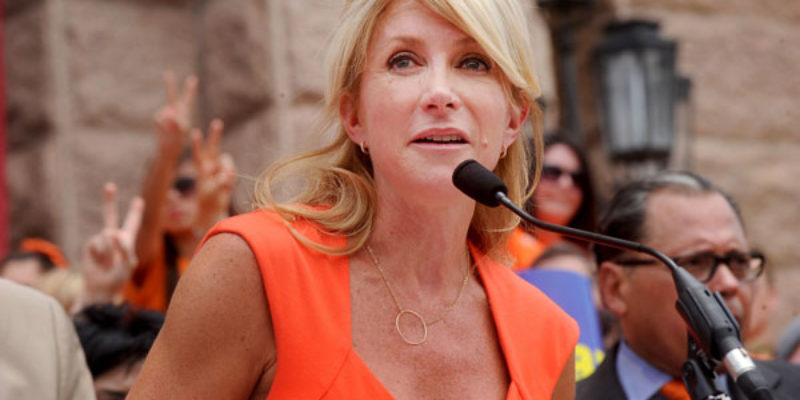 She’s the failed Texas gubernatorial candidate who became famous for rallying around abortion, specifically late-term abortion, and parading around in orange to make the point that she “Stands with women!”

Because, you know, you can only stand with women if you’re an advocate for late-term abortion apparently.

Well, the popularized Abortion Barbie (a term coined by RedState’s Erick Erickson) is getting her own television series on NBC that is being labeled as a “dramedy,” a kind of mix between comedy and drama.

Of course, don’t expect the Hollywood elites over at NBC to actually tell the truth about Davis and how she completely mis-characterized and exaggerated her life thus far just to gain votes from the abortion crowd and Texas residents who fell for the phony ‘rags-to-riches’ story she told.

These are the lies that NBC will continue to perpetuate in this new show:

When Davis was campaigning, she touted how she practically did not know anything other than a trailer in Texas. Except, that’s a total lie. Dallas Morning News Reporter Wayne Slater exposed just about all of Davis’ lies including this one. He factually reported how Davis only lived in a family-owned trailer for a few months, then she was moved into an apartment.

Yet again another lie told by Davis and practically covered up by the Associated Press. Davis first claimed that her mother dropped out of school in the 6th grade, just to add to the ‘Look, I came from nothing’ narrative of her campaign. However, this was proven false when it was exposed that her mother attended Muleshoe High School and was seen in a photo in a yearbook as a Sophomore. Later, Davis changed the story and said her mother was a 9th grade dropout.

Perhaps the biggest lie of Davis’ political career is the fact that she pushed a narrative that she was some sort of struggling paycheck to paycheck teen mom with no one to help her. This is a lie if there ever was one. Bottom line is that Davis first said she was divorced at age 19. That’s the first lie. Turned out, she got divorced at 21 years-old. Then, she touted the notion that she went to college and Harvard Law School “through community resources.” This is the second lie. Davis’ second husband paid for her final two years of college. And her second husband also took out a 10-year loan to put Davis through the best law school in the country.

But the Associated Press and now NBC will have the public believe Davis is the abortion superstar she is because she did it all on her own. When, in reality, that’s a lie.