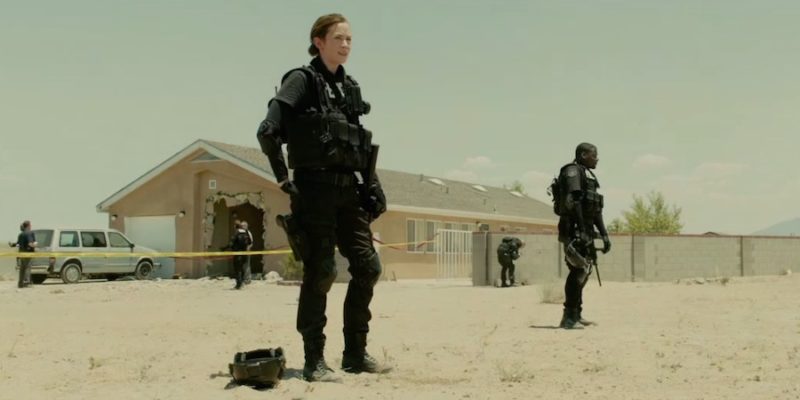 “Nothing will make sense to your American ears. But in the end, you will understand.”

Those are the words that are told to Kate Macer (Emily Blunt) as she voluntarily embarks on a mission to take on the Mexican drug cartels that have creeped slowly into the American south.

However, those words were not exclusively for Kate. If not more so, this message was for the viewer of Sicario, as Director Denis Villeneuve (Prisoners) exposes the unknown and uncovered war going on between the American-Mexican border that no one wants to speak of.

As the leading woman on her FBI Special Weapons and Tactics Team and the leading (nearly only) woman in Sicario, Kate begins breaking down doors in the United States to homes that have been bought up and used as human kidnapping quarters for the Mexican drug cartel.

Soon after, Matt Graver (Josh Brolin) wants Kate to join what she understands as a Department of Defense (DOD) mission to actually scratch the surface in finding the lead men responsible for the Mexican drug cartel infiltrating Texas and Arizona.

This is where Kate meets Alejandro (Benicio del Toro) and begins to question everything that she has just signed up for. As the team heads into Mexico, Kate realizes that this is not the mission she assumed it was.

But, this is true of the viewer as well. Villeneuve’s statement to take on a drug scene that the American government hardly ever wants to speak about is not only brave, but also works as a kind of fictionalized documentary expose, showcasing to the working class and middle class of the country what is truly going on that the rich, upper-class elites in Washington would rather us not see.

Just as Kate is frazzled by the scenes of dead men stripped naked and hanging by chains from their necks from a Mexican bridge, the audience is similarly shocked. Aside from the gorgeous aerial views of Villeneuve’s directorial genius, del Toro and Blunt’s stellar performances and the haze-y yellow color palette that Villeneuve is famous for, this is not a pretty picture, nor is it made to look cute.

In fact, every scene of Sicario looks strikingly normal, something that has become a signature for Villeneuve. (Think ‘Prisoners’ with those ugly brown and yellow styled suburban homes) This is not a film that’s going to sugar-coat the Mexican drug cartel, nor is it going to pretend like this is a Mexican issue.

Quite the contrary, the Mexican drug cartel is an American problem. Whether or not our American eyes and ears can handle that is besides the point at the end of Sicario. Instead, the question demanding an answer at the end of the film is ‘Are we wolves willing to fight or will we continue to lose using rules made up by rich Washington bureaucrats?’

If Sicario forces that answer from our corrupt DC elites is another story to be told.

Interested in more national news? We've got you covered! See More National News
Previous Article Jindal Is Now At 6 Percent In Iowa
Next Article Don’t Think That Black Voters Are All On Board With Mitch Landrieu’s Confederate Monument Removal