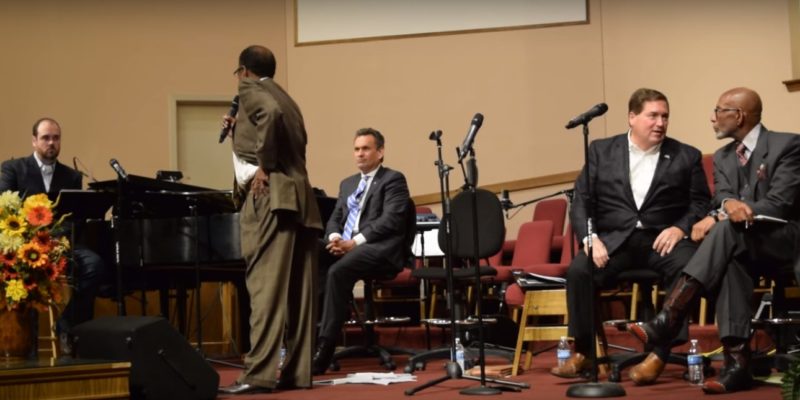 Candidates Lieutenant Governor were asked about Religious Liberty. Specifically they were asked

1. “Do you support Mike Johnson’s legislation?

2. How do you positively advertise a state that has deeply held religious beliefs in regards to traditional marriage with organizations who oppose our beliefs threaten to relocate events and/or businesses away from our state?

According to NOLA: A Republican from Bossier City, Johnson claims his religious freedom proposal (HB 707) — officially titled the Marriage and Conscience Act — carves out protection against state action for people who are religiously opposed to same-sex marriage. “It’s merely about trying to … ensure that as our cultural norms change and ideas about marriage change, that we don’t make religious liberty a casualty of those changes,” Johnson said.

Current Mayor-President Kip Holden started off one of his answers with “Let me use the scape goat answer.” He then proceeded to do just that. That exchange can be seen around minute 10:40 in the video below.

I looked up “scapegoat” to be sure of it’s meaning and while I knew it meant to escape something I didn’t realize the deeper meaning. I found it interesting, especially in regards to this question, and have shared the definition of the term “scapegoat” below:

Interested in more national news? We've got you covered! See More National News
Previous Article French Quarter Business Owners May Be Getting Dragged Into Fight Between City And Crime Prevention Organization
Next Article The Hilarious “Donald Trump Is Your Drunk Neighbor” Video