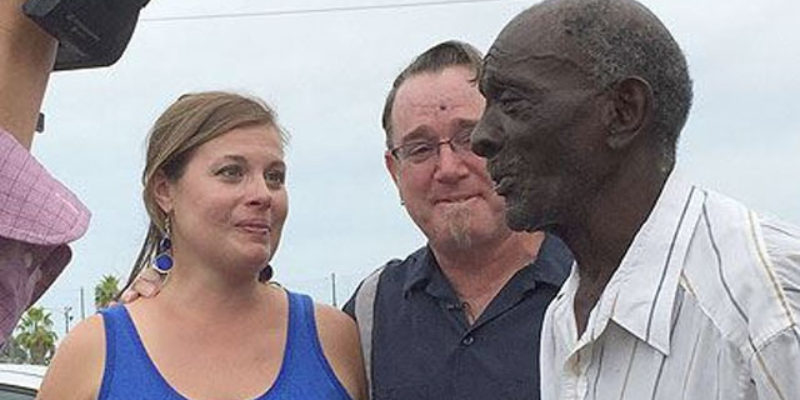 An 83-year-old guy in St. Petersburg, Florida named John Joyce makes money mowing lawns. And the 20-year-old truck he had died recently, so he was walking to all of their houses, and pushing his lawnmower along with him.

Sometimes he’d have to walk several miles just to get to one house. And when one of his customers found out about it a few weeks ago, they decided to help.

Robert and Nikki Norton got married earlier this month, but found out about his truck right before the wedding. And their first idea was to use some of their wedding money to get him a new ride. But it turned out they didn’t have to.

Nikki posted his story online, and started a GoFundMe page for him. And in less than a month, more than 300 people donated 13 GRAND to help him out.

Then a used car dealership agreed to sell them a 2004 Nissan V8 truck at cost. And they surprised John with it on Monday. They also had enough money left over to pay for the insurance AND buy him a new lawnmower.

One of John’s relatives told the local news it might be the nicest thing anyone’s ever done for him. And when they interviewed him right after he got the keys, he said he felt like a millionaire.

This is what the sharing economy can do. Never in human history has it been so easy to do so much good for so many people in need. The effort required to get the word out about John Joyce and raise the money to help him was, while the result is certainly heartwarming and without doubt impressive, anything but superhuman. Almost anybody on Facebook or Twitter who has built a social network of any quality can, with the right cause, generate enough participation to do something that makes a real difference in someone’s life.

That’s the power of GoFundMe and sites like it which allow strangers to do good works.

This is what’s known as the “civil society.” It’s the consensual interaction of free people for mutual benefit through fora outside of commerce. It’s churches, social clubs, fraternal organizations and the like, and now with the advent of social media and sites like GoFundMe, it is turbocharged. The ability to generate resources – financial and otherwise – to solve problems within a community through voluntary participation is greater than ever before. In fact, it’s great than anybody could have envisioned just a few years ago.

And it suggests the end of the welfare state at some point in the future. For who needs an unfeeling, uncaring and wasteful government when there are neighbors, friends and well-meaning strangers willing to help those truly in need?

Who needs government when there is love?

The people who donated to buy this guy a truck gave willingly and their gift was an act of love – not an act extracted from them by men with guns mostly against their will. And the product of that donation was formed through a frugal negotiation, not the bureaucratic waste of the monopolistic, non-consensual state.

With the presence of loving friends, John Joyce is no longer in need. He’s got a new truck and a new lawnmower and his business is in a position to do better than ever. And he doesn’t have to vote for anyone or show up to anyone’s rallies; he is free.

This is the America that Alexis de Tocqueville fell in love with, and it is greater than ever. It could be greater still if it didn’t bear the burden of a wasteful, soulless and poorly-incentivized welfare state – which by the way will only get worse with the budget deal this week which raids the Social Security Trust Fund of $150 billion to shore up the Social Security Disability program that encourages people to become professional malingerers for a government check.

We already see how companies like Uber and AirBnB are showing the Industrial Age regulatory state to be woefully obsolete. We’re beginning to see how GoFundMe is performing the same function to the disgrace of the Industrial Age welfare state.

This is a wonderful thing. It needs to be heralded by the Republican Party as a hallmark of the 21st century, and a way forward beyond the shackles of the obsolete and incompetent government structure the public no longer believes in.