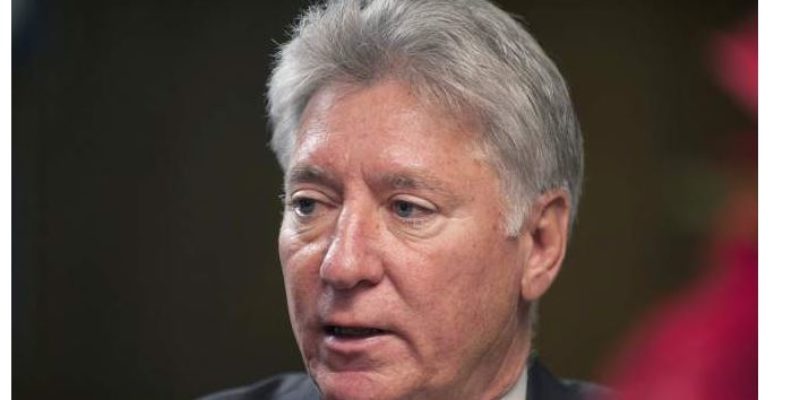 There is a blog out of Baton Rouge called The Rouge Collection, and it caters to the black community in town. Its publisher is a man named Gary Chambers, about whom I know little. 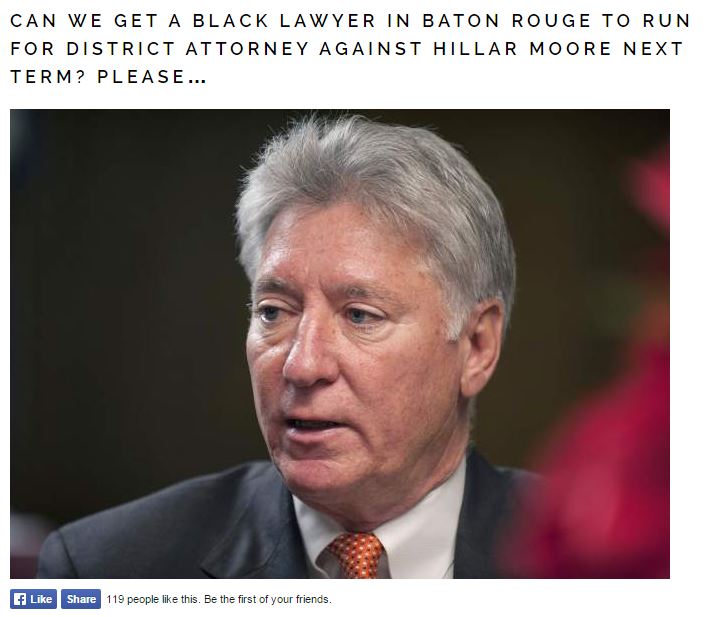 You’re not hallucinating. He just demanded that East Baton Rouge Parish’s white district attorney Hillar Moore, who is a Democrat by the way, be replaced by someone of African heritage.

Imagine what the reaction would be if the shoe was on the other foot.

The reason for the demand is actually not completely indefensible. Moore has been trying to get the Baton Rouge Metro Council to approve funding for a “misdemeanor jail,” which if it were instituted would allow people with outstanding fines or unpaid tickets and the like to be carted off someplace by the police as a “convincer” to get those fines cleaned up. There are some 160,000 outstanding warrants for unpaid tickets in East Baton Rouge Parish, and Moore is bound and determined to do something about it.

We here at the Hayride, possessed as we are with something of a libertarian spirit, hate the idea of a misdemeanor jail with verve and gusto. A lousy $75 traffic ticket had damned sure better not be the cause for incarceration in something that passes for a free society, particularly given the possibility of abuse giving such power to the government might create.

There are tens of thousands, if not hundreds, of bench warrants… and so many of them are people with multiple (as in 10-30 separate offense dates), usually for driving under suspension. When cops write these people on the street, knowing they have bench warrants, they are powerless to bring them in because EBR parish prison won’t take them. The only thing they can do is write them another ticket and send them on the way. The only way these cases are resolved is when the person is arrested on a more serious charge, and they end up getting credit for time served. If they can pay, the prosecutor is usually dismissing 10 of them to get one conviction with court costs. There simply is no remedy because there is no threat for these offenders. In District court, it’s the same situation. In the end, I believe a pretty substantial revenue would come in from court costs and fines if there were a threat of jail behind these traffic cases.

Almost all of them…don’t even have a driver’s license. They have pretty nice cars, though, and usually no insurance. There are very little incentives to follow the law, other than locking them up. I agree about incarcerating first offenders, even second ones. But Jesus, there are enormous volumes of outstanding cases…don’t you think there should be some kind of stick that actually works for these multiple offenders who just thumb their noses at the system? I see it every day and it makes my head spin off my neck. These are the same people who get public defenders appointed to them. They don’t [care] because the government will just provide the out for them. It creates a malaise that infects every aspect of these people’s lives, and I don’t know what Hillar said, but I imagine it was in this ballpark. I see it first hand and don’t know how to fix the problem other than threaten jail… they always seem to find the money when it happens, and in this case, I doubt many people would actually go to jail if we had it… and a lot more people would pay and be a little bit more careful about breaking the law again.

Point being, East Baton Rouge Parish needs to come up with some sort of carrot-and-stick by which they can find a way to get these people to pay their damned tickets.

My suggestion is somebody needs to design and build a mobile app that lets you pay your traffic tickets on your phone. Maybe that’s the billion-dollar idea I’ll use to buy my private island that none of you people are invited to. But it’s fair to question whether even that carrot would do any good unless there’s a legitimate stick to go with it.

And Hillar Moore, good guy that he is, is a district attorney. This idea is the perfect embodiment of the old saying that if all you have is a hammer every problem looks like a nail. He’s a DA, he prosecutes people and puts the worst ones in jail, so when he sees people who flout the law by ignoring their traffic tickets he figures the best solution is to make them the new worst ones and put them in jail.

But if you’re going to solve the problem you need to understand it first. And this business of unpaid traffic tickets isn’t a lawbreaking problem, it’s a collections problem.

East Baton Rouge Parish has the ability to take these people to court and put them in collections. Or factor those receivables to a collections company (though it’s possible that the risk profile means collections companies won’t pay more than pennies on the dollar to take those accounts on). In the event some of the malefactors collect government assistance, maybe the thing to do is attempt to garnish that income, or wages if there are any. Or make them ineligible to receive government assistance until these accounts are cleared. The theory behind that being that if you’re not going to obey the law and give the government what it’s owed then you’re not in a position to ask the government for help and you won’t get any. Hold up your end.

But putting people in jail for slow-paying a traffic ticket, or more than one, is just philosophically wrong. Taking your freedom away is the second most obnoxious thing the government can do other than executing you; to think it would exercise that power for neglecting to pay a fine for speeding or not having a stupid inspection sticker is just ridiculous.

So that’s us agreeing with this guy. But here’s what he said…

We need a district attorney who can connect with the community he serves. I know that many black lawyers look at the odds of running against Moore and don’t want to get in a race where Moore will certainly raise more funds and have a lot of support. The difference now is that Tarvald Smith being elected to the city-wide judge seat in this last election shows that a black man can win city-wide.

One name that keeps coming up when I ask who can we get to run for district attorney is Judge Don Johnson. I’m not sure he is even thinking about it, but I’m saying this in advance, that myself and others are looking for one of these many talented black lawyers to step up to the plate. Moore has not shown me the willingness to engage the right people in the community. We need young black men involved in the process of reforming the issues in our community.

When I look at the landscape of how our city is governed, when you see a black face it is almost always black women. There is nothing wrong with using the black women of our community, they are certainly talented and qualified. We should balance it out though, we need to show young black men that other young black men are engaged in the process. That we have young black men who are ready to change the culture of this city for the good. We aren’t getting that under the current scope of leadership, not just with Moore, but throughout city government.

The Rouge Collection reaches more than 50,000 people a month currently, by this time next year we expect that number to double. By the time it’s time for elect the next district attorney of Baton Rouge, we could be much higher than that. We need to engage black voters in a way that they have not been engaged before. That’s what The Rouge Collection aims to do. Why? Because when you look at the overall leadership and growth of Baton Rouge, we need to change the guard in some areas.

We shouldn’t have a city that is majority black and all the top leaders in law enforcement are white. Why? Because we need to breakdown the fear walls building all around the country because those in leadership don’t know how to engage the black community.

In other words, here’s a white guy trying to push a policy he doesn’t like and therefore the remedy should be that a black guy would replace him.

We noticed this idiocy and tossed it out on Facebook, and there was a considerable reaction – including this from WJBO-AM’s Kevin Gallagher…

Which attracted Mr. Chambers, and the results were, sadly, not unpredictable… 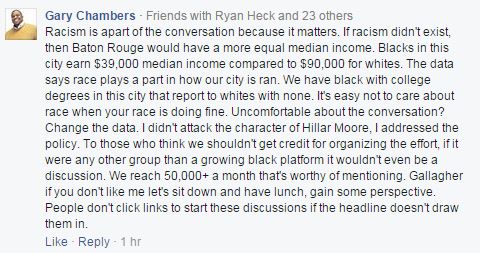 And then this followed…

You are allowed to slap your forehead and mutter profanities now.

In any event, this is what we’re now going to see more of in East Baton Rouge – the contention that the only solution to policies disliked by the black community is black elected officials. That isn’t going to produce racial harmony, or anything like it – but for people like Gary Chambers, if there’s enough electoral strength that doesn’t matter a bit.

The real estate industry and economic development crowd in Ascension and Livingston Parishes are on their knees thanking the Good Lord for their fortunes right now.

Interested in more news from Louisiana? We've got you covered! See More Louisiana News
Previous Article Is John Bel Edwards Pro-Life? According To This Survey Answer, Nope
Next Article This Is What The Sharing Economy Can Do, And What Republican Candidates Need To Start Talking About