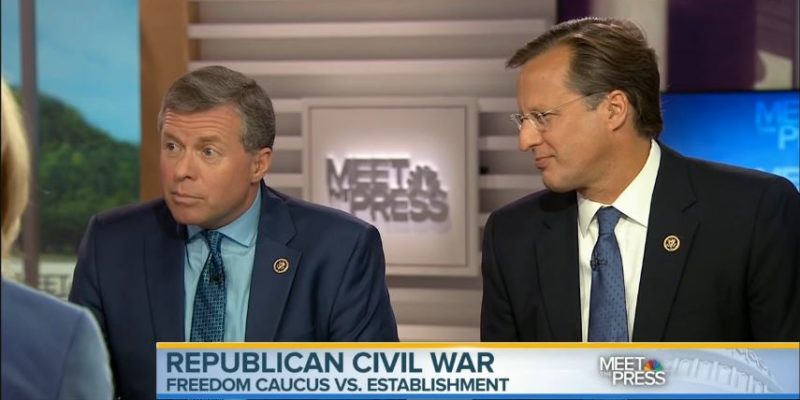 This is from Meet The Press yesterday, and it’s an interesting debate between a pair of Republican Congressmen representing the two wings of the party in the House – Rep. Dave Brat of Virginia, who took down former House Majority Leader Eric Cantor last year in a colossal upset for the conservative wing of the party, and Rep. Charlie Dent of Pennsylvania, who has been in the House 11 years and is one of the more vocal moderates/RINO’s you’ll find. Dent, as is discussed in this clip, is leading a discharge petition to get the Export-Import Bank funding renewed with mostly Democrat support.

For our money Brat wins this debate pretty handily, since what he’s talking about isn’t even particularly an ideological agenda but rather a demand by the House Freedom Caucus to return power back to the committees and the membership which has been largely taken away by the leadership in the past 10 years. Bills aren’t going through the traditional committee structure like they used to be, and therefore there are far less opportunities to amend them – and so most members of Congress really don’t have the ability to legislate. Brat wants that changed, and he and the Freedom Caucus are backing Rep. Daniel Webster (R-FL), who isn’t a particularly heavy ideologue in his own right, under the goal of re-opening the House.

Dent takes the standard Beltway line that John Boehner and the current leadership structure have bent over backward to make nice with the conservatives in the House, but he fumbles his narrative quite a bit when he defends the recently-passed continuing resolution that Boehner rammed through with mostly Democrat votes by alleging that the majority of the Republican caucus in the House was for the CR but voted against it when it was safe to do so. Well, if Dent’s position represents the American people, or that of the constituents of these House members in question, why would they be voting against their own opinions and that of the people they represent in order to sow chaos and convince the chattering classes that the GOP can’t govern?

That argument doesn’t make any sense, and it damages Dent’s credibility for the rest of the debate. Clearly the CR had to be passed with Democrat votes because most Republicans don’t believe their constituents will reward them for taking Dent’s side. Most want to extract some concessions from President Obama in exchange for using the power of the purse in a “cooperative” way, and they don’t see the current leadership doing that.

Dent represents a “swing” district in Pennsylvania, but one wonders how he’ll manage to continue representing it. The Democrats aren’t going to just let him have that seat when it’s possible to elect one of their own, and he’s going to have to explain to Republican voters in his district why it’s any better for them to have him in that seat as opposed to the Democrat when he refuses to fight for his own side.

The Charlie Dents of the world are perfectly fine to have when things are going well, the budget is in balance and the country isn’t in decline. They can grease the wheels of governance with compromise and good feelings. But when the federal government and the country as a whole have gone badly off the tracks as is currently the case, there has to be a reckoning of sorts. And at least for Republicans and conservatives in particular, it’s the Dave Brats who have the better argument.

The Freedom Caucus is well within its rights to push Dan Webster for Speaker, or to secure guarantees of its interests being served by a different candidate in order to earn its support. For Dent to call that “chaos” and “obstructionism” is clearly out of line – and for him to call for a Republican Speaker to pursue Democrat support in order to get to 218 votes is unacceptable; the Republican electorate will respond harshly.

Interested in more national news? We've got you covered! See More National News
Previous Article So If You’re Watching TV In Louisiana This Week, You Might See These Ads Back-To-Back…
Next Article The Low Popahirum, October 12, 2015