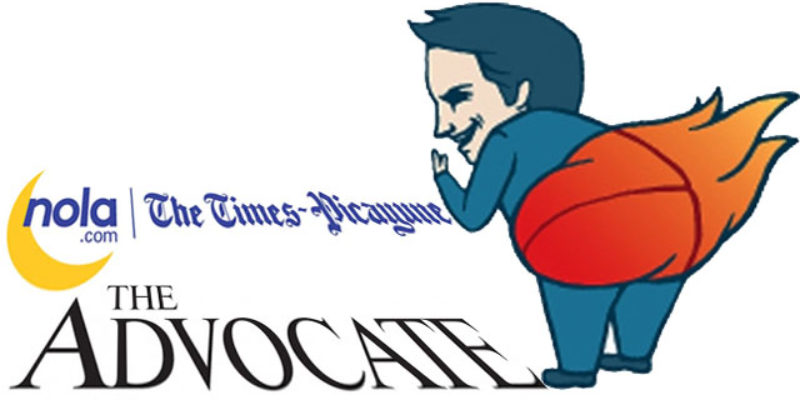 You might have seen Mark Ballard’s story in the Advocate yesterday about how there really isn’t all that much difference between David Vitter and John Bel Edwards policy-wise. If you haven’t, here’s a taste…

On some issues, they are starkly different: Edwards wants a higher minimum wage to help raise the state’s lowly paid working class, about half the state. Vitter argues that setting a minimum wage would inhibit businesses from creating jobs, the proven way to lift the underclass into prosperity.

In truth, however, they agree on a lot.

Both are against abortion but are for guns. Both oppose Common Core. And both say they will call the Legislature into session soon after being inaugurated to address the budget mess inherited from Jindal, whose management of the state both criticize.

Edwards and Vitter agree that the money BP pays in fines for its part in the Deepwater Horizon oil spill should go toward restoring the state’s coastline, which is eroding in geometric proportions everyday.

With elected officials looking around for revenue to cover needs, they have cast an eye on some of the millions of dollars BP is paying.

“As governor I’m going to simply demand that those funds are used for the intended purpose,” Vitter said.

Edwards agreed: “We need a governor who will dig in his heels.”

The piece goes on about several issues in which there are perhaps nuanced policy differences between the two candidates, and it’s essentially an abject lie. There is a larger ideological spread between Vitter and Edwards than any two runoff candidates in Louisiana in well more than a decade, and perhaps as much as three decades; Edwards is certainly further to the left of Bill Jefferson on economic issues and possibly further to the left than Cleo Fields in the same regard, while Vitter is the most solid conservative candidate for governor in memory.

The spread can most easily be seen in the respective lifetime ratings of the two from LABI. Vitter had a lifetime score of 98 with the group, Edwards a 25.

Ballard also gives Edwards a whole lot of credit for his word in repeating Edwards’ allegation he’s pro-life; Edwards fought against de-funding Planned Parenthood in the wake of those awful videos, he’s twice supported the most shockingly pro-abortion president in American history and his first political statement on abortion touted the “freedom of choice.” If Edwards gets to be judged on meaningless campaign statements and not actual evidence, perhaps one might make the case there isn’t much difference between himself and Vitter on the issues.

Which is exactly what Edwards wants voters to believe, so he can run a campaign savaging Vitter’s character as a liar and a hypocrite while the truth of his own statements goes unexamined.

Interesting how Ballard works that narrative into an “objective” news piece Edwards’ campaign could have written as an entreaty to Jay Dardenne and Scott Angelle voters.

But for shamelessly dishonest reporting with a relatively obvious bias in favor of the Democrat, Julia O’Donohue’s NOLA.com piece about Vitter’s Friday kickoff rally in Baton Rouge simply can’t be beaten…

U.S. Sen. David Vitter wants to be head of Louisiana’s state government, but if a midday campaign rally is any indication, elected officials who work in Baton Rouge might not be enthusiastically behind him yet.

Around a dozen Republican leaders appeared with Vitter on stage Friday (Oct. 30) during his lunchtime campaign event held at The Pelican House, a popular bar and restaurant a few miles from the Louisiana Capitol in Baton Rouge. But most of the people who spoke on his behalf were connected to Louisiana’s congressional delegation, not state government.

Three congressmen and U.S. Sen. Bill Cassidy’s wife Laura all spoke on Vitter’s behalf during the rally. A former U.S. Senate candidate who wants to run for that office again, Rob Maness, also addressed the crowd. Vitter, who has been a member of Congress since 1999, is considered one of the leaders of Louisiana’s congressional delegation.

Noticeably absent were many of the elected officials Vitter would have to work with most closely if he is elected governor. Only three state legislators showed up to the Vitter event, even though the statehouse — and much of the Baton Rouge area delegation — is overwhelmingly Republican. Several members of the Legislature’s leadership team were also in town already for a budget meeting at the Capitol Friday morning, so it wouldn’t have been difficult to attend.

I was at the rally, and what O’Donohue wrote was completely ridiculous. The event was very well-attended for something that took place at 1 p.m. on a weekday as torrential rains threatened in the skies, and in attendance was a who’s-who of Baton Rouge area activists and politicos.

O’Donohue never mentioned that Rep. Steve Carter was in attendance and Rep. Valerie Hodges gave the invocation at the rally. It looked like better than half of the Republican Party of East Baton Rouge’s executive committee was there, along with pretty much the entire staff of the Louisiana GOP and a big chunk of the state’s more influential conservative lobbyists.

She also didn’t mention that Jay Dardenne’s campaign manager Jay Vicknair was there, and Vicknair is now working for Vitter’s campaign.

In other words, there was far more of a “gang’s all here” feeling at that rally among Republican politicos in Baton Rouge than that NOLA piece would indicate. And furthermore, there was practically nobody from Washington; the fact that some congressmen and their wives were on the stage doesn’t make them Washington people; they’re members of the Louisiana delegation. And contra the impression the article would leave that lots of big-time Republican politicians don’t support Vitter he had someone representing all five of the Louisiana congressional districts held by Republicans at the event.

Another piece of Edwards’ narrative so far in the campaign is that David Vitter is a Washington insider out of touch with Louisiana, which given the scads of articles about how much Vitter is hated in Washington for crusading to end the favorable treatment under Obamacare for those who work on Capitol Hill is a laughable one. But there is the Times-Picayune reporter, fueling that narrative with a story nobody who was there thinks even remotely resembles the truth. And this from a paper that actually endorsed Vitter in the primary.

The Louisiana media has conducted itself atrociously in this election cycle. It’s getting worse.