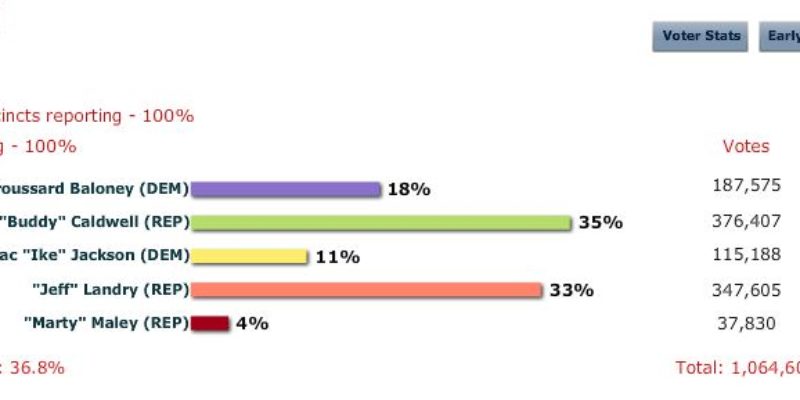 The final tally for the Oct. 24 primary in the Louisiana Attorney General’s race was as follows…

Looking at those numbers, it’s obvious that the support of the Democrat candidates in the primary is the key to winning the runoff in the race.

With a static electoral model, an assumption one probably should not make given the forces assembling for the runoff in other races, Jeff Landry could expect to receive a majority of fellow Republican Marty Maley’s voters – they’re for the most part Republicans who voted against the incumbent Buddy Caldwell. That would put the two candidates at virtual parity with the Democrat voters who pulled levers for Geri Broussard Baloney and Ike Jackson – some 29 percent of the vote – in the lurch.

And that’s why today’s announcement that Baloney, who came in third with 18 percent of the vote in the primary, is endorsing Landry might be a game-changer in the race…

In making her endorsement of Jeff Landry, Geri stated:

“After meeting with Jeff Landry, followed by prayerful consideration with my family, I have decided to endorse Jeff Landry because of his willingness to embrace forward thinking policies, his desire to actually transform and change the way the Attorney General’s office does business.

I ran for Attorney General because I truly believe that Louisiana cannot take another four years of Buddy Caldwell’s bad practices and policies. Jeff Landry is the only candidate that will address the critical issues that are important to Louisiana’s working families. Jeff is committed to reforming our broken criminal justice system. He understands the need for fiscal responsibility and inclusion in the Attorney General’s office. In addition, like myself, Jeff is an entrepreneur. He understands the important role small businesses play in our economy and will fight to protect our businesses.

Louisiana needs an Attorney General that will not squander the agencies resources to make brownie points with his political party. Jeff knows that crime and corruption have no boundaries or political party. I believe that Jeff is a coalition builder who will end the Buddy system of doling out huge no-bid contracts to political contributors. Instead, I believe that Jeff Landry will put the people of Louisiana first.

Jeff Landry thanked Geri for her trust and confidence, stating:

“I am humbled to receive Geri’s endorsement, trust, and confidence.

Geri is like so many other Louisiana voters who know we need change in Baton Rouge. Geri and I both know the Attorney General’s office under Buddy Caldwell has been about rewarding the desires of a few, over the needs of the many.

Justice should not be based on who you are, what part of the state you are from, your gender, your age, your political party, or your race. As Louisiana’s next Attorney General I will treat everybody fairly and equally so all citizens can develop trust that their government is there to work for them, not against them.”

An attorney from New Orleans who founded an all-female, minority owned law firm in the River Parishes, Geri Broussard Baloney has prosecuted hundreds of criminal and civil cases over the last twenty years. In addition to their desire to fix corruption issues in the Attorney General’s office, both Geri and Jeff share the fact their mothers were school teachers. They understand the importance of education in decreasing crime.

The bipartisan pair will work together going into the November 21st runoff. Jeff Landry has the endorsement of the Republican Party of Louisiana and Louisiana Democratic Party gave Geri Broussard Baloney their official endorsement for the primary election.

Baloney probably can’t be expected to deliver that entire 18 percent. But if Landry adds, say, three percent of Maley’s four and 12-13 percent from Baloney’s 18, that would put him at 48-49 percent – and if he could get as much as 15-20 percent of Jackson’s vote he’s over the top.

Assuming a static electoral model, that is. We have no reason to assume the electorate will look the same as it did in the primary; if anything, it’s likely to be more conservative. Baloney’s endorsement, which carries with it the possibility that he might carry a majority of Louisiana’s Democrat voters and some sizable chunk of the black vote, could turn out be the blow which gives Landry the election.

Interested in more national news? We've got you covered! See More National News
Previous Article WAGUESPACK: A Big Election For The Big Easy
Next Article A Few New Orleans Illegal Immigrants Starved Themselves And The Washington Post Made It Into A Huge Deal