The ever sanctimonious St. John Bel has been running around Louisiana claiming he’s pro-family and pro-faith. He runs as a conservative Catholic.

However, his rhetoric and record in the legislature tell a completely different story. Take for example the issue of religious liberty which has popped up since the U.S. Supreme Court’s Obergefell decision.

John Bel Edwards has been an opponent of religious liberty as Will Hall points out in his article today.  As of writing, Hall’s article was not available because the site crashed.

However, the main gist of his article is that John Bel Edwards is not only an opponent of religious liberty, but he takes a hostile view towards conservative Christians. Edwards had some not very nice things to say about conservative Christians to Mary Griggs who runs the Louisiana Forum For Equality, which is a LGBT group. Griggs has made her post disappear, but we have the cache of it and the screencap. 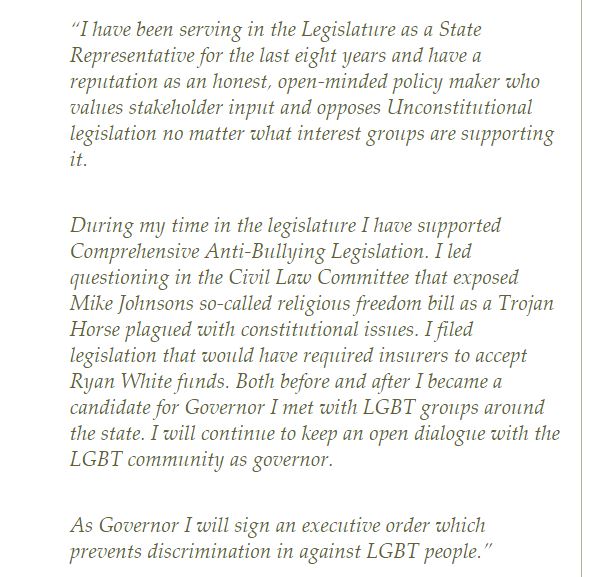 If St. John Bel is elected governor, he will make the Christian baker bake that cake for the gay wedding. It doesn’t matter if the baker views his participation in such a ceremony as sacrilege. To call legislation designed to protect the rights of those of oppose gay marriage a “Trojan Horse” reveals that John Bel Edwards’s values are not those of Louisiana.

Instead, John Bel Edwards makes common cause with radical leftists who say a boy who identifies as a girl is a girl. The Obama administration has even filed a court brief supporting the “right” of someone to use the restroom that corresponds as the gender they identify as, not the one they are biologically are. Does Edwards support biology or does he support the radical leftist social engineering of the Obama administration?

If you’re a conservative Christian who lives by their faith, like so much of this state, John Bel Edwards is not your friend. After all, he would rather party at a strip club than speak to you at a church.

Interested in more news from Louisiana? We've got you covered! See More Louisiana News
Previous Article LANDRY: A Guide For This Weekend’s Elections
Next Article BREAKING: Bobby Jindal Drops Out Of The Presidential Race