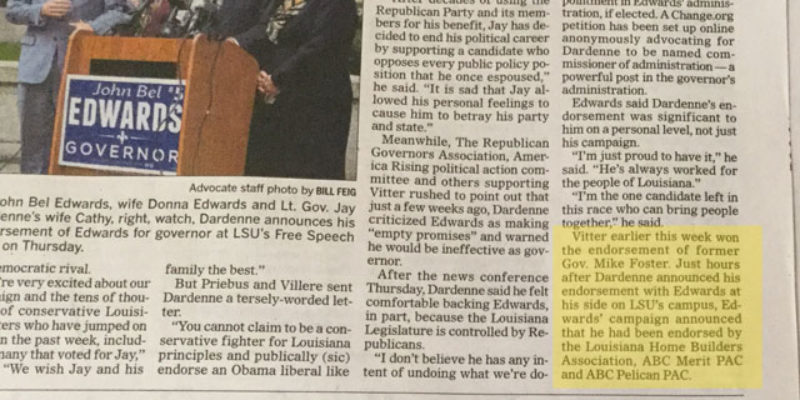 Before we get into the meat of this little kerfuffle, a pair of points as to background.

First, people who are familiar with the goings-on at Louisiana’s Capitol know that two of the lobby groups who are among the most active, and most consistently vociferous in pushing conservative causes, are the Associated Building Contractors and the Louisiana Homebuilders Association.

ABC and LHBA are represented, respectively, by John Walters and Michelle Shirley. They are fantastic people, and they’ve been around the Capitol for more than a decade apiece. Both of them can be found at virtually every political event which goes on at the Capitol or around it, and both of them are well-known and well-liked. If you consider yourself part of the insider crowd up there (which I don’t, by the way) or at least knowledgeable about Capitol subjects, then you know not just who John and Michelle are but what they fight for every day, bill after bill, when the legislature is in session. Lots of other business lobby groups tend to hang back on bills that don’t directly involve their industry, but John and Michelle are in the fight for conservative causes across the board.

Every day, every week, every month, every session, every year.

And now I can collect a free lunch from both of them. Just kidding. Not really.

And this week, both ABC and LHBA endorsed David Vitter. Which isn’t a surprise. It’s newsworthy, despite the fact no media entity reported their endorsements as a separate news story, but because it’s a dog-bites-man event where you could almost get away with just assuming that those endorsements would have come. Of course they’d endorse Vitter; it’s inconceivable that they would endorse John Bel Edwards. Which is the point of my giving John and Michelle the publicity above. And not the free lunches I’ll be getting. Honest.

The second point to be made is that the Baton Rouge Advocate has been absolutely horrendous in its coverage of the gubernatorial race this year. That paper went out and hired Tyler Bridges, an investigative reporter with a reputation for a rather combative left-wing slant, to cover the race, and Bridges gets what looks like no limits on space to write about the campaign. His writings have been obsessively focused on David Vitter’s campaign; at least that’s been the impression a lot of media-watchers I talk to have conveyed, and especially since he got 2,000 words to go through the timeline of Vitter’s “hooker problem” in a Sunday edition a few weeks back in which no actual news was reported.

And in the final days before the primary, the Advocate had two “scandal” stories about Vitter. The first was that he “left the scene” after being “involved in a car accident” in a car he was riding that was “driven by an unknown female staffer.” The Times-Picayune’s story on that incident was all of seven lines, but the Advocate made the thing sound like he’d been caught red-handed in some sort of marital infidelity.

When the fact was Vitter was riding in a car driven by his chief fundraiser to a campaign event, she got in a fender-bender, somebody else from the campaign came and got him so he wouldn’t be late to the event and the fundraiser, who is not unknown at all but whose name is Courtney Guastella and who is actually very well-known in Louisiana’s political circles, stayed at the scene to wait for the police.

This happened in Jefferson Parish, of course, so part of the misreporting of the incident could very well be the result of what the sheriffs’ office there, which is run by Vitter’s political enemy Newell Normand, released to the media. But if you’ve covered the Vitter campaign you wouldn’t have too much trouble recognizing that if Vitter was in a car going to a fundraising event in Metairie and the driver of the car was female, it was probably Guastella and you’d have little trouble confirming that before breaking the story. To the extent that a candidate riding in a car that gets in a fender-bender is remotely newsworthy in the first place.

Jefferson Parish also played into the other “scandal” that the Advocate broke on the Friday before the election; that being the Robert Frenzel arrest and the “spying” case involving the Vitter campaign. Frenzel, a private investigator employed by the opposition research firm Vitter’s campaign hired, was sitting in a Metairie coffeehouse where Normand and John Cummings, John Bel Edwards’ business partner, and Danny DeNoux, a private eye associated with Normand who had orchestrated a video interview with a female ex-convict and former prostitute making outrageous, unsubstantiated, conflicting and potentially libelous charges against Vitter, were openly talking politics. Frenzel recorded the conversation, which is not illegal in a public space like that, and yet he was still arrested by a gaggle of sheriff’s deputies essentially for displeasing Normand, and the Advocate’s story by Bridges and Jim Mustian only reported Normand’s version of it. Ordinarily, that would be acceptable journalism since Normand is the sheriff and he, as law enforcement, is taken as a neutral source – but clearly he’s not neutral in this case.

Those two stories, covered as scandals affecting the Vitter campaign on the day before the primary election, might well have influenced the score if not the outcome. A week before the primary, the Hayride/Marbleport Polling survey of the LAGOV race had Edwards at 40, Vitter at 28, Jay Dardenne at 14 and Scott Angelle at 13. That poll hit Edwards on the nose, it was just one point off for Dardenne (he ended up with 15 percent), and Vitter lost five points with all of them going to Angelle (he went from 13 to 19).

In other words, you could interpret our poll as basically spot on, with 5-6 percent of the voters getting spooked by Vitter’s lousy week leading up to the primary and moving to Angelle as their second choice. The Advocate’s stories would be the largest late-game surprises that would account for such a move, though certainly we’re open to other arguments. The rain alone on Oct. 24 would have been enough to make for the results to jump around a bit.

All of which is why this is so interesting…

Vitter earlier this week won the endorsement of former Gov. Mike Foster. Just hours after Dardenne announced his endorsement with Edwards at his side on LSU’s campus, Vitter’s campaign announced that he had been endorsed by the Louisiana Home Builders Association, ABC Merit PAC and ABC Pelican PAC.

Editor’s note: This story originally reported Edwards’ campaign announced he had been endorsed by the Louisiana Home Builders Association, ABC Merit PAC and ABC Pelican PAC. Those endorsements are for Vitter’s campaign.

That’s at the bottom of an article by Elizabeth Crisp headed by Roger Villere calling Dardenne “the Nick Saban of Louisiana politics” for having endorsed Edwards.

The original, uncorrected story went online yesterday afternoon. And it went uncorrected, as we understand it, all the way through to this morning.

It certainly went uncorrected past the Advocate’s print deadline. We know this because here’s what dead-tree Advocate readers saw in their driveways this morning (highlighted in pertinent part)… 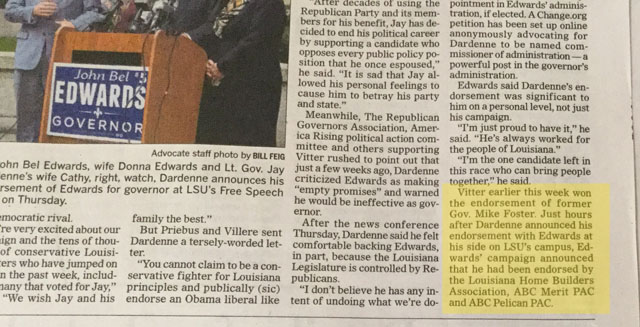 One of the most egregious, obvious errors you could make where Louisiana politics is concerned – as we explained above – gets made by a paper with a track record in this campaign of misreporting events in ways that (1) paint Vitter in an unflattering, scurrillous light (2) immediately before an election. And that error is made the day before early voting starts.

Is it a glaring, three-alarm-fire sort of mistake? No. But it’s the kind of thing that happens all the time. And it’s never that David Vitter, or some other Republican, got the endorsement of the Louisiana Association of Educators or the Plumbers and Steamfitters Union; these mistakes always seem to go the other way. And then nobody sees the retraction, particularly when it doesn’t come before the print deadline.

How did I find out about this? Because Walters and Shirley, who got deluged with phone calls from their members this morning demanding to know how on earth they could possibly endorse a socialist union shill who’d destroy their businesses, both called me in a rage.

And then when I contacted Vitter’s spokesman Luke Bolar about this, because the campaign had made the announcement about the endorsements, he said he’d attempted to contact Crisp about the error yesterday well before the print deadline.

Which doesn’t even matter. This is an error that nobody who knows Louisiana politics would make, and neither Crisp nor anybody at the Advocate’s editorial staff bothered to correct before it went to print, and it makes it look like the “conservative Democrat” John Bel Edwards is attracting support from conservative lobby groups – right before early voting starts.

And there won’t be the correction in print that nobody sees until Saturday’s paper at the earliest.

Nah, you shouldn’t be suspicious about this. Not in the least.

I was not contacted by Luke Bolar until 8:45 pm last night, which is after my print deadline.

To answer your earlier question: I didn’t see his email at the time…I’m sure you can imagine how many emails I receive each day. Everyone who I work with knows to call or text me if it’s urgent — especially in the evening. They all have my cell. I was watching the MS State (my alma mater) vs Mizzou game last night — spending some time with my husband who is traveling to Alabama for the weekend for the LSU game. Was not at my computer where email is more noticeable.

The Mississippi State-Missouri game started at 8:00.

Interested in more news from Louisiana? We've got you covered! See More Louisiana News
Previous Article In Louisiana, The Insiders Are Losing
Next Article The One Major Factor Of New Orleans’ Crime Problem That Was Never Mentioned At Mitch Landrieu’s Meeting With Gang Members