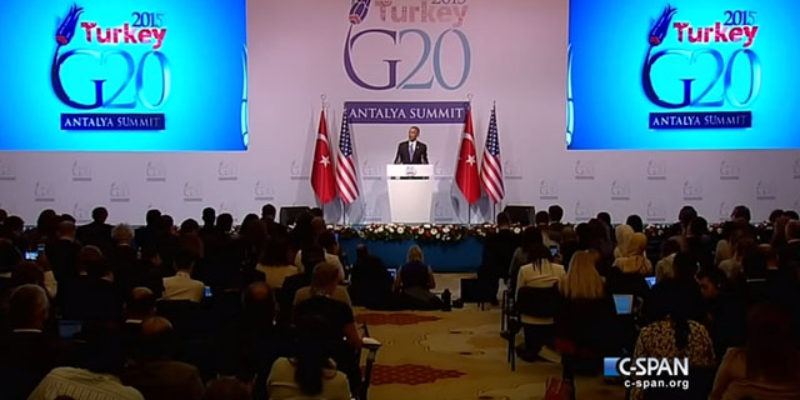 You’re going to see lots of shorter clips from this on cable news and elsewhere on the internet, but here’s a full 49-minute version.

What you’ll notice is the air of indifference and truculence emanating from the president, who expressly rejects the idea of shouldering the burden of international leadership against radical Islam and talks about how he expects more help from the other G-20 leaders for the fight he doesn’t want to lead.

He’s demanding more money for humanitarian aid to Syria, with no particular discussion of what that money is for. And he’s trashing people who don’t want to take Syrian refugees, giving a Kevin Bacon “All is well!” reassurance that those refugees are strongly vetted – when the reality on the ground clearly reflects that’s not true.

Plus he discusses the diplomatic efforts to get rid of Bashir Assad, which are going nowhere.

And then the questions get started, and they’re not friendly. And he goes from indifferent and truculent to petulant and dismissive. It gets particularly interesting at the 31-minute mark.