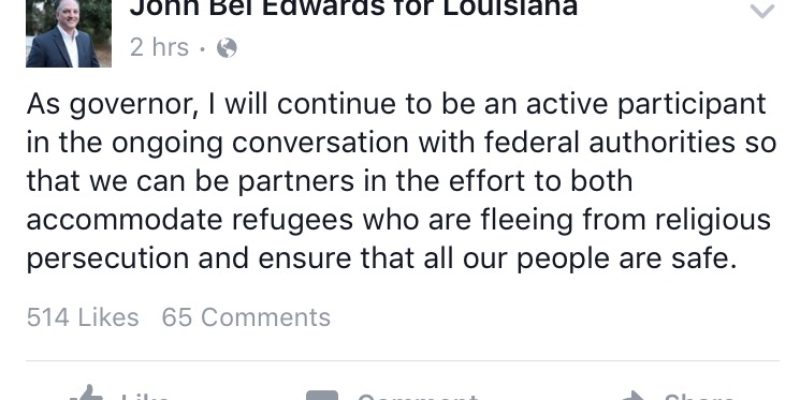 In the wake of the Paris terror attacks and the revelation that at least one of the terrorists got into the country among the Syrian refugees, we now have fifteen states, including Louisiana, who have said “Nope” to the prospect of accepting any refugees of our own. This via the Washington Examiner:

As of Monday afternoon, the following states were opposed to taking refugees — most have Republican governors, although New Hampshire has a Democratic governor:

In some cases, like Florida, governors were asking members of Congress to intervene because they don’t have the legal authority to stop the Obama administration’s placement of refugees.

“[I]t is our understanding that the state does not have the authority to prevent the federal government from funding the relocation of these Syrian refugees to Florida even without state support,” Republican Gov. Rick Scott wrote.

The Hayride asked around to some lawyers we know and they honestly couldn’t tell us what this order means. None of them could see how this order could have any practical impact. This is particuarly true if the Federal government simply moves the refugees to military bases or other Federal government properties.

So it seems that Jindal’s order is largely meaningless. He cannot stop the Federal government from resettling Syrian refugees in the state of Louisiana.

However, he can make it more difficult for the Federal government to do so. For example, the Department of Children and Family Services and other state agencies can deny benefits to refugees. But is this completely wise? For example, wouldn’t we want refugees to get help from the Louisiana Workforce Commission in order to enter Louisiana’s job market?

Whether or not the states have that power, I’d argue, is largely irrelevant. The larger point is that these state leaders are doing whatever it is they can in order to protect their citizens from another Paris-style attack. There are no guarantees that whatever “screening” the State Department offers will actually pick up on any red flags.

Political posturing or not, this is a move that, in keeping with polling trends, is a very serious rebuke of the very unserious President of the United States, Barack Obama. His total lack of a strategy other than the feel-good “We helped them out!” strategy leaves the United States exposed to more threats.