This was a wildly entertaining brushback…

Oh boo hoo, Bob Mann. He bellyaches all the time about what a bad place LSU is to work, about this state, etc. Why…

Howard Arceneaux is a veteran journalist and a former adjunct journalism professor at LSU. He was the faculty advisor for the LSU Office of Student Media for quite a long time.

Arceneaux isn’t some jakeleg without a clue. He’s a hell of a lot more qualified in the craft than Mann is.

And here’s his entire statement…

Oh boo hoo, Bob Mann. He bellyaches all the time about what a bad place LSU is to work, about this state, etc.

Why doesn’t he go somewhere else if he is so miserable? Perhaps because nobody will pay him $120,000-plus to teach two classes a semester and write his blog and Facebook posts all day. The LSU athletic department is run as a business, and a profitable one at that. The academic side of the university is not run like a business. It’s a bloated bureaucracy and is filled with these faculty types like Mann who believe they’re entitled to something the hard-working people in this state who pay his salary are not. LSU is a very poorly run investment for this state and that’s why our tax dollars are being wasted, paying for blowhards like this dude. Bob Mann is a whiner and a hypocrite of the highest order and his schtick makes him a first-class boor who is wasting MY tax dollars. People who disagree with him are called bigots or worse. He doesn’t allow any dissenting views on his website and blog, yet he relies on his free speech right to belittle LSU and its administrators.

I’ve got a suggestion: Teach more classes, Bob. Bring in some grant money, Bob. Make the investment in your salary and your “research” and writing pay off for the university and this state. Get a real job, Bob. Or perhaps you can’t because nobody wants to hire you in the real world. That’s why you have to live in one made of ivory towers built on the tax dollars of the good people of this state. No Bob, you’re a bad investment and YOU and your ilk are the problem with LSU.

And here is what he was reacting to… 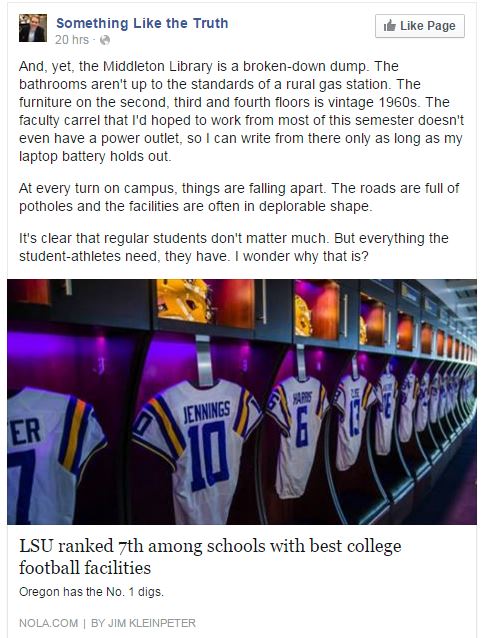 The thing to understand about Bob Mann’s narrative on LSU’s athletic facilities being unfairly superior to its academic facilities, which is of a piece with the serial bitching now underway about the awful rednecks who care more about Les Miles than who is the provost at the school or how much of our tax dollars are spent on it, is that it is contrived above his head. Rather than this being Mann’s opinion it’s a narrative cooked up by LSU’s president F. King Alexander and compliant members of the LSU Board of Supervisors – most notably the one who owns a business publication in Baton Rouge which is now dutifully parroting the company line. Bob Mann’s entire career has been spent delivering someone else’s spin, and that’s all this is.

It’s a narrative without the benefit of much truth, but it’s the one Alexander and his allies have settled on now that they’ve decided they can’t sell the “academic bankruptcy” line without doing more damage than good going forward. But frankly, berating Louisianans for caring about those manifestations of LSU’s endeavors whose results aren’t subject to politics or arbitrary agendas is breathtakingly stupid; nobody who cares about LSU football is hostile to its academic success, but it’s difficult to have much faith in modern academics to produce excellence when what emanates from American campuses are trigger warnings and safe spaces and a full-on assault on free speech. The reason the athletic department draws donations and involvement is that its results are measurable and competitive; were the university more focused on showing the same accountability on the academic side, as it has been at times in the past, there would be similar support on the academic side.

But in Alexander’s case, what is he looking for? The least-accountable support possible. He wants general fund dollars, not those which are subject to the marketplace like in the case of tuition and fees (even when in-state tuition at LSU comes in large measure from the TOPS program). He’s essentially demanding that LSU be given more funding from compulsory state dollars rather than those which the university would compete for on a student-by-student basis.

Which is a recipe for ordinary Louisianans to lose interest. Particularly when, because of the vagaries of the state budget process and the locking-up of billions of dollars in funding for everything but higher education and health care, to fund LSU the way Alexander demands would entail tax increases and a loss of economic competitiveness to Texas and Florida (meaning that LSU can put out one outstanding graduate after another, to the benefit of the productive endeavor of thriving employers in Houston, Dallas and Orlando). If that’s his aim, he can expect a lack of buy-in by the public. And if he seeks to accomplish it by punishing taxpayers for caring about LSU football, and using his allies and minions as a chorus to browbeat the university’s supporters, then don’t be surprised if he leaves the university a lot worse than he found it when he’s eventually relieved of his current position.