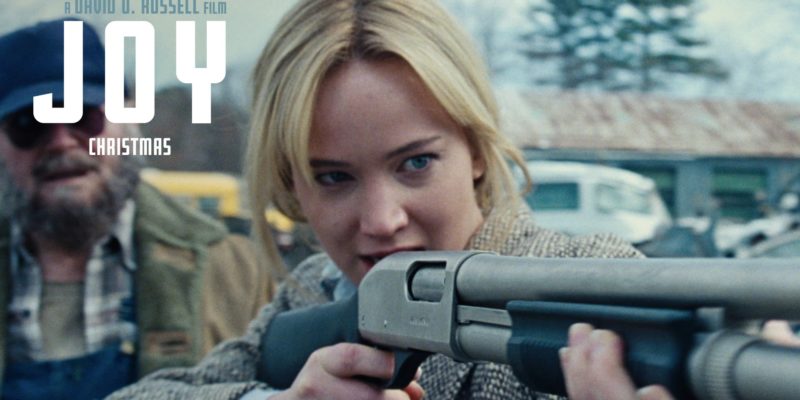 “Don’t ever think that the world owes you anything, because it doesn’t.”

Those are possibly the most relevant words spoken by a character this year, as Jennifer Lawrence razzles and dazzles movie-goers in her latest film collaboration with Oscar-winning Director David O’Russell (‘Silver Linings Playbook’ and ‘American Hustle’) known as Joy.

Joy, played marvelously by Lawrence, is the true-life story of QVC and Home Shopping Network (HSN) phenomenon Joy Mangano, who is famous for inventing the Miracle Mop, Huggable Hangers and a gazillion other complicated-made-easy products.

As an Eastern Airlines travel agent, Joy’s life has become a chaotic swirl of raising children, barely making ends meet, rivaling with her step-sister, living with her divorced husband and practically taking care of her mother who sits in bed all day and watches soap operas.

But what was chaotic about Joy’s life, soon becomes a narrative Christmas present depicting the wonders that capitalism brings to those who have the genius and work-ethic to take on a billion-dollar household product’s industry.

After being repeatedly told ‘no’ and put down by her family and colleagues, Joy takes her ideas, her inventions, her business and her merciful mindset into her own hands without ever claiming to be victimized by the very industry she so desperately needs to sell her product.

In the film’s most prominent scene, Joy warns her step-sister who directly disobeys her business practices, to “Never speak on my behalf about my business again” in a tone which makes her appear like a CEO of a Fortune-500 corporation in a room full of executives.

Following the confrontation, Joy heads outside in the New York snow to fire off a round on a rifle, characterizing her move to cut out the noise and do business as if your life depends on it, which Joy’s most certainly did.

The brilliant component of Lawrence and O’Russell’s adaption of Joy Mangano’s life is the purposeful exclusion of ‘Women can have it all’ and ‘You don’t need a man’ cliches that too often plague the majority of female-lead movies in Hollywood.

Joy is a film about three generations of women. It follows a woman making it in the harsh world of advertising and the household product’s industry.

Nonetheless, it is not a film exclusively for women.

The obvious female elements of Joy do not bog down the film with a constant narrative that ‘Men are bad’ and ‘The business world hates women.’ To the contrary, actually.

It was not until Joy went on QVC, herself, to sell her product (which was her idea) that her Miracle Mop’s began flying off the shelves. Meanwhile, the beloved Joan Rivers (played by her daughter, Melissa) cheered her on, joking that she had great legs and should wear a skirt when selling her product on television.

At the same time, Joy’s step-sister was side-lining her and Joy’s investment partner, her father’s girlfriend, blamed her as being a dumb housewife when it seemed her business was heading south. This is what makes Joy such an honest film, as it never falls to the fate of the ‘Men vs. Women’ plot.

Joy wrestles with the idea of entitlement and what the world owes to an individual.

As Joy learned from an early age, she was not entitled to anything nor did she have a right to immediate success. She had to make the world what she wanted it to be.

And by the end of Joy, there is truly something to be said about a woman and film that feels that society does not owe them a damn thing.