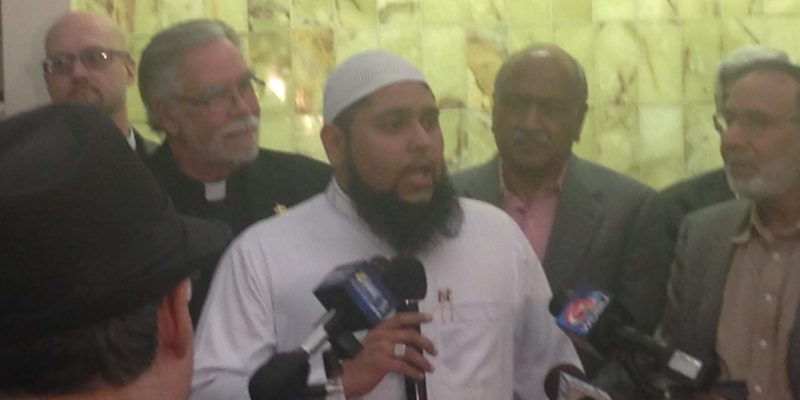 The Islamic community in the Metairie area held a press conference yesterday with other religious leaders to discuss apparent backlash and “bullying” they are enduring since the Paris, France and San Bernardino, Ca. terrorist attacks.

Imam Abdul Rahman Bashir spoke on behalf of Muslims in the area, which has about 10,000 followers, and said that ever since the attacks, members of the local Mosques are allegedly being bullied by locals.

“There have been acts of bullying that have been reported. The women in our community are being intimidated verbally and some physically,” Bashir said.

Rabbi Robert Loewy also slammed the alleged Muslim backlash since the San Bernardino attacks at the press conference, saying “All of us have been repulsed and concerned about the level of rhetoric in our country, from a variety of politics to all sorts of people simply labeling and stereotyping the men and women of the Islamic faith.”

Lutheran Rev. Ronald Unger said the Metairie religious community wanted to hold the press conference so that they could all address the “hate going on in the country these days,” referring to apparent Muslim backlash.

Bashir said that Muslims fighting with ISIS are “determined to manipulate and exploit” the teachings of Islam.

Also present was a member of the Catholic Archdiocese of New Orleans. Just this week, the Clarion Herald, the Archdiocese’s official newspaper, published an article showing the similarities between Muslims and Catholics when it comes to the teachings of the Virgin Mary.

The article mainly perpetuated the mainstream media narrative that the Muslim faith is just like Christianity, Catholicism and Judaism.

Interested in more news from Louisiana? We've got you covered! See More Louisiana News
Previous Article Mitt Romney In One Tweet Shows Everything Wrong With The GOP Establishment
Next Article Quinnipiac: Trump 28, Cruz 24