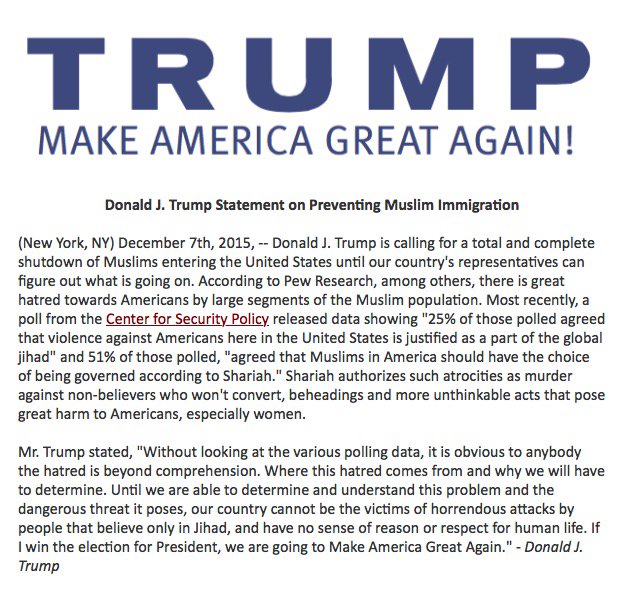 Jeb Bush, John Kasich and Chris Christie all immediately put out statements to the effect Trump is the Worst Guy In The World for suggesting there be no more Muslims let in as immigrants or tourists. Others piled on from there.

The problem is, what Trump is getting at is a fairly majoritarian statement. And not just in the United States – all over the Western world.

Look at France, for example. Marine LePen is going to be your new French premier; you can bank on that. The National Front just wiped the floor with the other parties there on an unapologetic anti-Muslim, anti-immigrant message they’ve been pushing for a generation.

America isn’t where France is, yet. But the polls show Americans are sick and tired of Muslims and San Bernardino was a nail in the coffin of public sentiment on the issue.

See the polls. Here’s one from YouGov/Economist…

A strong majority of Americans—including 63% of Hispanics—do not think America should accept Muslim Syrian refugees.

In addition, an overwhelming majority of Americans (67%) felt that “all refugees should be subject to more security screenings.”

That’s BEFORE San Bernardino. What do you think it’s like now? We’ll know later this week, because Rasmussen stated today they’re polling the issue right now. The numbers are likely to be brutal – last month Rasmussen found 60 percent of the country agreeing with the statement that America is at war with radical Islam (only 24 percent disagree).

After all, today Michael McCaul, the new chair of the House Homeland Security Committee, revealed that the Obama administration’s Syrian refugee program is vulnerable to ISIS penetration despite what the president says…

The head of the House Committee on Homeland Security said Monday that members of the Islamic State have explored entering the United States through the refugee resettlement program, a claim that could ramp up additional pressure on President Obama to rethink his plan to resettle 10,000 refugees from Syria and Iraq.

Rep. Michael T. McCaul, Texas Republican, said Islamic State members in Syria have tried to “exploit” the system to get into the country.

“The U.S. government has information to indicate that individuals tied to terrorist groups in Syria have already attempted to gain access to our country through the U.S. refugee program,” Mr. McCaul said during a speech at the National Defense University.

At this point it’s difficult to justify the current alternative to Trump’s program – which doesn’t mean what he said can’t be greatly improved upon. The president took to the airwaves last night to essentially say that there is nothing particularly amiss within the Muslim community and nothing particular to that community for the public to worry about, and his plan for fighting terror is for the world to stand as one…on global warming, while violating the 2nd Amendment rights of Americans by saying that if you’re on his “no-fly” list, which has 700,000 names on it, is poorly constructed, allows for no due process and appears completely subject to his own whims, you ought to be barred from buying a gun. Meaning that Obama wants the power to deny gun ownership to people he disfavors. Remember that the Weekly Standard’s Stephen Hayes, he of Fox News Contributor fame, was put on the no-fly list.

That’s Obama’s plan. Trump’s plan says we’re not taking any more Muslim immigrants or tourists. Which one do you think is less invasive to the rights of American citizens? Which does a better job of safeguarding against jihadist terrorism?

This is not to say Trump’s plan doesn’t suck. It does suck. If you’re a heart surgeon from Toronto who happens to be a Muslim but you haven’t been to a mosque in 20 years and your wife and kids are Methodists, Trump would say you’re not allowed to fly in to perform a heart transplant at the Mayo Clinic. That’s stupid, and it’s counterproductive.

Cruz tweeted that if elected president, “I will shut down the broken immigration system that is letting jihadists into our country.” Cruz elaborated in a statement:

The President should place an immediate moratorium on refugees from countries with a significant al Qaeda or ISIS presence, such as Syria. I’ve introduced legislation to make this happen; it is not a desired step, but a necessary step for the security of the United States.

Similarly, Rand Paul tweeted, “While ‪@POTUS paid lip service to this fight, he plans to keep failed rules in place & allow tens of thousands of refugees to enter the US.”

“Immigration visas & refugees from countries with active terror networks must be halted while we determine how to better secure our borders,” Paul in a separate tweet. “His administration is focused on gun laws that won’t stop terrorists while pushing policies that will let more of them in the country,” Paul wrote.

The fact is, the public rightfully perceives a threat emanating from the Muslim community in our midst. That isn’t to say that most Muslims are a threat, but it doesn’t take most Muslims to present a significant threat the government has a duty to take countermeasures against. It only takes enough jihadists to build networks and secure financing for terrorist operations to create that threat.

And the Center For Security Policy’s poll indicates 25 percent of American Muslims say violent jihad against their countrymen is justified. Twenty-five percent of a population as large as American Muslims are is more than enough to constitute a threat. Particularly when we see mosque after mosque outed as a factory for radicalization, and groups like CAIR and the Islamic Circle of North America pervade that community to provide infrastructure and financing for radicalization.

Developing tonight is a story that somebody paid Syed Farook some $28,000 three weeks before he and his wife shot those people in San Bernardino. Which is even greater evidence of a terrorist network operating in this country. That these people spent time in Saudi Arabia and possibly Pakistan, both of which are countries with extensive terror network ties, make this case an almost typical one; how many American Muslims turn out to have gone off to countries like those, Yemen, Sudan, Somalia, Afghanistan and other places and come back as trained, murderous fanatics? The underwear bomber. Little Rock. Ft. Hood, even though Nidal Hasan was radicalized online. The Tsarnaevs.

I said this on Facebook earlier today and I’ll say it again – there is clearly a Muslim 5th column operating in this country, and that 5th column is capable of producing terrorists, saboteurs and other asymmetrical combatants. And the threat that 5th column poses is very similar to one we’ve already faced.

Immediately after Pearl Harbor a little-known incident occurred on the nearly-uninhabited Hawaiian island of Niihau. One of the Japanese pilots taking part of the Pearl Harbor attacks, whose name was Shigenori Nishikaichi, crash-landed his damaged plane on that island, which was privately owned and worked by a population mostly of native Hawaiians and Japanese immigrants. The islanders initially treated Nishikaichi with hospitality; not having electricity or telephones at the time they were unaware of the attack. Shortly thereafter, though, news of the attack reached Niihau via battery-powered radio, and things then got interesting.

Specifically, three Japanese inhabitants (two of whom were American-born) of Niihau helped Nishikaichi arm himself and essentially commandeer the island before the islanders heroically fought back and killed him. The military, warned after six of the islanders rowed 10 hours to nearby Kauaʻi, then arrived to sort things out and arrest two of the surviving Japanese immigrants (one committed suicide). That Niihau has never had a movie made about it is a disgrace; it’s one of the more heroic and fascinating stories coming out of World War II.

It was the Niihau incident which provided much of the impulse by the federal government to put the Japanese-American population on the West Coast in internment camps. The Roosevelt administration was concerned about the potential of the Japanese to invade the U.S. mainland and the potential for a Niihau incident writ large with 5th column activity.

Trump isn’t suggesting internment camps for Muslims. He’s suggesting that with an active, organized and murderous enemy out there constituting a threat, and that enemy emanating from a particular ideology, it’s a good idea not to import more of it here. He’s essentially suggesting that the U.S. not accept any Japanese immigrants for the duration of World War II in the wake of the Pearl Harbor attacks.

His plan isn’t as good as those of Cruz and Paul. But set against Obama’s admonishment that you’re a bigot if you’re not for full-on Islamic immigration and gun control to boot, he’ll do fine with it.

UPDATE: This doesn’t help Trump’s cause much at all…

#DonaldTrump advocates closing up the Internet 2 stop the process of thought/free speech. So Communist China-like. pic.twitter.com/hRab3xpVcK

The problem with Trump is that he’ll come up with a majoritarian impulse, or if you prefer a populist one, and he’ll win on the fact that the elites and the establishment will personally attack him – which will come off as an attack on his supporters. But then he’ll double down on his statement and say something that can’t be defended, like that he wants to shut down the whole internet for Muslim countries, and he’ll make the elites and the establishment, whom the public can’t stand, look like they know what they’re doing. And the public is convinced the establishment is the problem.

Shutting down the internet in Iraq can’t even be done, much less oughtn’t be done. The answer isn’t that – the answer is exactly what Anonymous is doing, which is to hack the hell out of the global jihadist movement and disrupt their ability to message to the world. Is that something the federal government should be doing? Yes. ISIS doesn’t have the right to free speech, and they ought to be silenced wherever possible. And killing their Twitter accounts is nothing compared to the carpet-bombing of their physical locations they ought to be subjected to.

Trump goes and says that, and he’s defensible. Shutting down the internet for the people in those countries who actually would like to be on our side is not.

Interested in more national news? We've got you covered! See More National News
Previous Article EXCLUSIVE: Mitch Landrieu Has Had The Votes To Remove New Orleans’ Historical Monuments From The Beginning
Next Article VIDEO: It Is Unwise For Leftists To Challenge Dinesh D’Souza To A Theoretical Debate