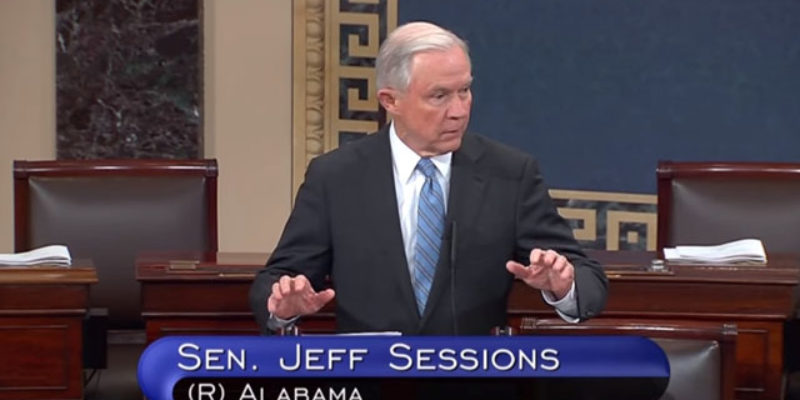 We want to say that Paul Ryan’s omnibus spending bill designed to stop a government shutdown is a good thing, because included in it is a lifting of the ban on exports of domestic oil. House Majority Whip Steve Scalise has fought for that, and rightly so, and it’s to his credit that common-sense provision is in it.

Unfortunately, to get the oil export ban lifted will require swallowing a lot of other policy changes which aren’t all that great, including a lot of stuff on immigration which is mind-blowingly awful. Sen. Jeff Sessions explains why…

In the dead of night after 2am this morning, Congressional leadership unveiled a more than 2,000 page ‘omnibus’ year-end funding bill which would, among other things: fully-fund the President’s refugee expansion; fully-fund sanctuary cities; fully-fund the resettlement of illegal aliens youth and their families crossing the border; lock-in tax credits for illegal aliens; and quadruple the highly controversial H-2B foreign worker visa being used to replace Americans as truck drivers, construction workers, theme park employees, and in blue collar jobs across the nation.

Sessions, the Chairman of the Immigration Subcommittee, issued a statement about the bill as it speeds to a vote before it can be read, observing in part that GOP voters: “have come to believe that their party’s elites are not only uninterested in defending their interests but – as with this legislation, and fast-tracking the President’s international trade pact – openly hostile to them.” On the floor today, Sessions further reminded his colleagues that their duty is the American people – not special interests, immigration advocacy groups, or lobbyists for narrow business concerns.

Sessions observed that – as the omnibus paves the way for a huge immigration increase beyond today’s record-breaking highs – that more than 8 in 10 American voters want the level of immigration in American frozen or cut, and yet the GOP-led Congress is about to surge it even higher.

According to the U.S. Census Bureau – even without these increases – immigration will add the population equivalent of 1 new Los Angeles to the country each 3 years.

The U.S. has admitted 59 million immigrants since 1965. As historical context, after the numerically-smaller 1880-1920 immigration wave, future immigration was reduced to promote wage growth for US-born and immigrant workers: there was zero net growth in the foreign-born population over the course of the next half-century (in fact, it declined markedly). Now, after five decades of unprecedented immigration, the U.S. is on path to add another five decades of unprecedented immigration on top of that – setting new all-time records every single decade to come.

Sessions notes that voters are in “open rebellion” from Washington, and willing to support Donald Trump for president despite Trump’s propensity for wild statements of sentiment passing for policy proposals and background as a limousine liberal. Bad policy like this is why.