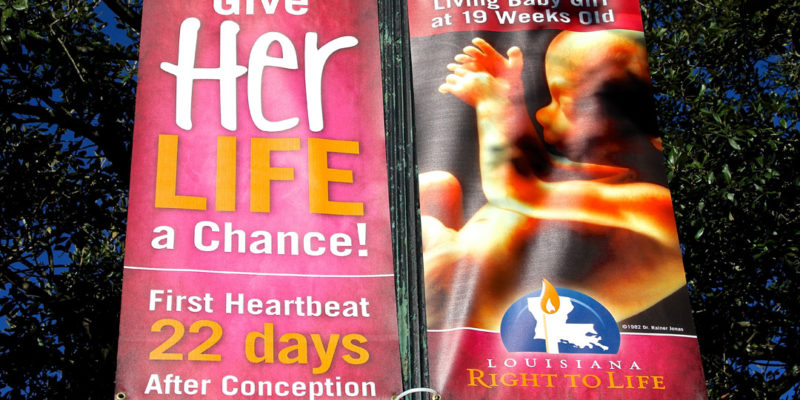 The Louisiana Right to Life is causing quite a stir in the ever-so-liberal New Orleans area.

The state’s largest pro-life organization has placed pro-life signs along city-owned streetlight poles on St. Charles near Nashville Avenue, but now some city officials and abortion advocates are demanding the signs be removed because they are “offensive.”

Ben Clapper with the Louisiana Right to Life said the organization went through the entire process with New Orleans’ Public Works Department and got the signage approved.  The guidelines for banners on streetlight poles prohibit commercial advertising or political campaigning, only “community messaging” is allowed.

Subsequently the pro-life banners were approved by the city because they fall under the “community messaging” category.

However, abortion advocates in New Orleans say the signs need to be removed because it makes it seem as though the city endorses the pro-life initiative.

“For it to look like the city is endorsing this in the same way they would put up a banner for the anniversary of the Treme neighborhood is very inappropriate,” said Jessie Nieblas, communications coordinator for the New Orleans Abortion Fund, which tries to assist women who cannot afford to pay for abortions.

Nieblas went on to claim that the banners could ignite violent rhetoric and violent behavior from pro-lifers in the New Orleans area.

New Orleans City Councilwoman Stacy Head (D) also claimed that the banners were “offensive” and even compared the banners to Confederate monuments. Here’s Head’s full statement on the issue:

Clapper, though, said that the banners were approved by the city and any issues anyone has with them should be taken up with the city’s Public Works Department.

Interested in more national news? We've got you covered! See More National News
Previous Article President Obama Is Coming To Baton Rouge To Tell Us How Much He Loves John Bel Edwards
Next Article MILLS: Sanctity Of Life And Louisiana Values