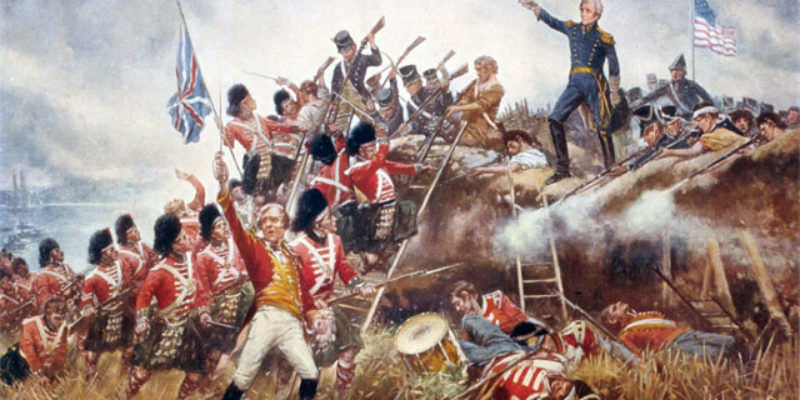 This Friday marks the end of the bicentennial of the Battle of New Orleans, one of the most consequential military engagements in world history.

Two centuries and a year ago His Majesty’s forces landed in the swamps along St. Bernard Parish as part of an attempt to seize New Orleans, which the American government had purchased along with the rest of the Louisiana Territory just over a decade before.

Fought after the Treaty of Ghent was signed (though not ratified), the battle pitted seasoned British units that had just defeated Napoleon against the most cosmopolitan force to bear arms under the Star Spangled Banner: regulars, free men of color from Haiti, Choctaw warriors, French and Spaniards who had been “thrown in” along with the Louisiana Purchase, volunteers from Kentucky, Tennessee and Mississippi, and last but certainly not least the Hellish Banditti that were the Baratarian pirates.

Yet under the command of Andrew Jackson, the citizen soldiers and rogues turned back the strongest fighting force in the world. Jackson gave credit to Providence for the delivery of New Orleans from the invasion and his grateful countrymen gave Old Hickory the presidency in 1828.

The battle also transformed the relationship between Great Britain and their former colonies, which were only 38 years removed from having declared independence in Philadelphia and 31 years from actually achieving it with the Treaty of Paris.

Rather than condescendingly viewing the United States as ungrateful and contemptible secessionists less annoying than France, the overwhelming British defeat in the New Orleans suburbs forced them to reconsider that perception. The British needling of the United States through Native American proxies and direct indignities such as the impressment of American sailors came to a close and the foundation for a lasting peace and friendship was established.

America won its independence from Britain at Yorktown but secured its respect as a nation at New Orleans.

Before the city became synonymous with riots, Baltimore had pulled off a remarkable feat with their own 200th anniversary of a War of 1812 American victory, which cost the British their best general in the conflict and gave America our excellent national anthem.

Then-governor and current presidential asterisk Martin O’Malley had spent years producing a celebration worthy of the historical event being commemorated.

The fifteen star and striped flag flew from state buildings, businesses and residences throughout Baltimore, the Harbor Area was transformed into a pyrotechnic stage, Francis Scott Key’s handwritten copy of the “Star Spangled Banner” was loaned to Fort McHenry, and the defiant bastion was visited by President Barack Obama, Vice-President Joe Biden, and other high ranking officials.

In contrast, Louisiana’s own presidential asterisk didn’t bother attending a single event, including one featuring the ambassador from the United Kingdom- something a White House aspirant trying to establish some foreign policy cred should’ve jumped at.

The committee charged with coordinating events had no budget and drew little corporate backing.

The federal government seemed to share the same lack of interest as the fourth floor of the State Capitol.   There were no presidential, vice-presidential or cabinet secretary visits.  The regional director for the National Park Service, the federal agency charged with maintaining the Chalmette Battlefield, also no showed.

I don’t know if it’s a “Red State” thing that kept the Washington big wigs away or this administration’s blatant Anglophobia or a lack of an appreciation of the history made on the plains of Chalmette. (It should be noted that Obama has visited the Lower Ninth Ward a few times for Katrina related memorials yet couldn’t be bothered to literally go the “extra mile” to Republican-leaning St. Bernard, which had been totally destroyed by Katrina).

Or perhaps it was a foreshadowing of the Democratic Party’s increasing vilification and disdain for that party’s first president, as the annual J-J Dinners that long served as staple fundraisers for state Democratic Parties are being rechristened due to discomfort over Jackson and Thomas Jefferson (a president the Democrats erroneously claim or rather claim-ed)having owned slaves.

The federal government’s great contribution towards the commemoration of the Battle of New Orleans was issuing a commemorative stamp- and that was after four years of lobbying by local officials and then-US Senator Mary Landrieu.

Though they were relatively low key, there were two areas where Louisiana managed to trump Maryland in its War of 1812 commemoration. First, the Ursuline nuns followed through on their two hundred year old vow and hosted their annual Mass of Thanksgiving for the American victory.  The second was the coordination of a series of battle reenactments that drew over one thousand living history enthusiasts from around the globe.

Local government, history enthusiasts, a benefactor with ties to the United Kingdom, and a handful of civic minded property owners succeeded where the feds and state skipped out.

Washington and Baton Rouge had a great opportunity to showcase this important chapter in our national and state history and the formation of the alliance that saved the world from tyranny three times in the last century.

Both flunked this history lesson and merit a bipartisan F.