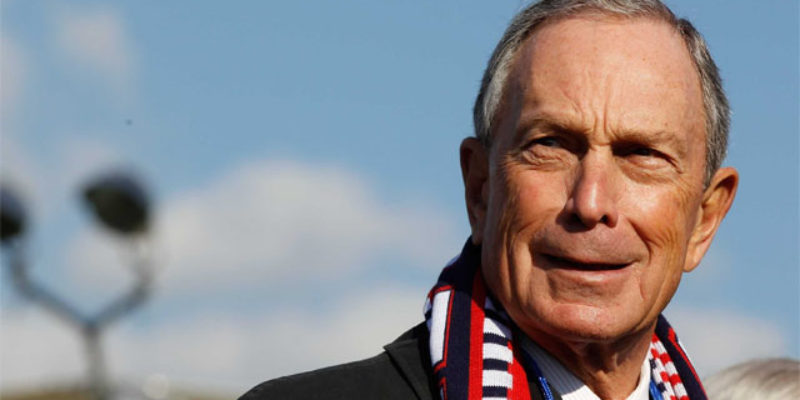 Although he is two weeks shy of his 74th birthday, Bloomberg is obviously not interested in retirement. He was originally registered as a Democrat, then became a “liberal Republican,” before settling in as a so-called Independent.

He is under the delusion that he can appeal to centrist voters disgusted with the two party system.  In reality, Bloomberg is a hard core leftist who would severely damage the prospects of the Democratic presidential candidate and hand the White House to the GOP nominee.

In New York, Bloomberg was known as the “Nanny Mayor” because he tried to ban an array of food and drink items for health reasons. He famously declared war on “Big Gulp” soft drinks and tried to ban them from convenience stores, Thankfully, this bizarre episode in limiting personal freedom was overruled in court. Bloomberg was also unsuccessful in trying to set a limit for sodium levels in processed foods. However, he did succeed in outlawing trans fats from restaurants and Styrofoam packaging in single serve food containers.

Mayor Bloomberg was not only interested in controlling what people would eat or drink, he was also a proponent of aggressively banning smoking. Thus, he pushed through new city laws forbidding smoking from not only bars and restaurants, but also public places in New York City.

On the social issues, Bloomberg is completely in line with liberal Democrats on everything. He supports abortion, gay marriage and Common Core educational standards, while he is opposed to the death penalty.

On economic issues, Bloomberg is supposedly a fiscal conservative, but, in reality, he advocates higher taxes. In fact, as Mayor, Bloomberg balanced the budget with $6 billion in higher property taxes.

Even though it angered family members of 9/11 victims, Bloomberg famously supported the building of a mosque on property next to Ground Zero in New York. In an emotional speech backing the mosque, Bloomberg said, “if we don’t build it, the terrorists will win.” Thankfully, the mosque was never built as the developer eventually decided to build a condominium tower.

Bloomberg’s support of the mosque was never popular in New York, but it was consistent with his overall view regarding the threat of radical Muslim. In fact, he is not concerned about the threat of Muslim immigration and believes in open borders and unchecked illegal immigration into this country.

Bloomberg is also well known for his staunch support of gun control measures such as expanded background checks and barring the sale of certain types of weaponry such as assault rifles. He once said, “I don’t know why people carry guns. Guns kill people.”

On trade, Bloomberg is an internationalist and supports “free trade” and the passage Trans Pacific Partnership.

Finally, Bloomberg is no fan of term limits as he extended his mayoral tenure to three terms in New York City.

In summation, on almost every issue, Bloomberg is a liberal Democrat masquerading as an Independent. As a presidential candidate representing one of the most liberal states in the nation, Bloomberg would definitely siphon votes from the nominee of the Democratic Party. Clearly, on most of the vital issues, Bloomberg agrees with both Hillary Clinton and Bernie Sanders.

While he is in perfect symmetry with the Democrats on the issues, Bloomberg completely opposes the vast majority of the Republican Party’s platform. In a presidential race, almost no conservative voters would be lured into supporting Bloomberg.

At this juncture in our nation’s history, after eight disastrous years of Barack Obama as President, it is essential that neither a liberal nor a socialist be elected the next President of the United States.

With $1 billion campaign war chest and an almost 100% liberal platform, Bloomberg would practically guarantee the defeat of the Democratic presidential nominee.

For that important reason, Mayor Bloomberg please run for President. The country needs you in the race!