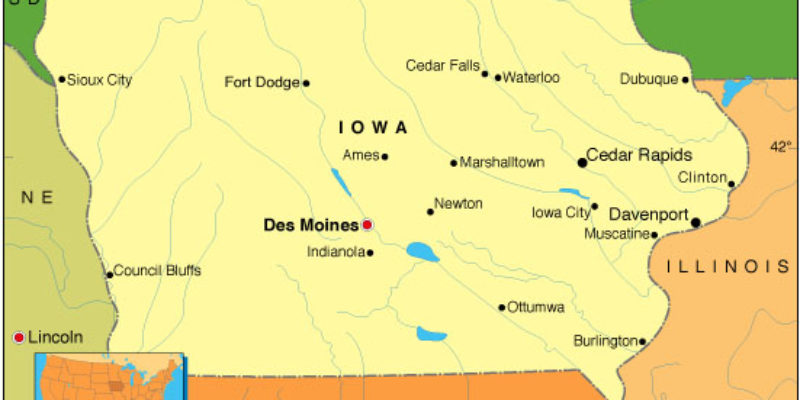 Some random thoughts on the Republican nomination battle less than four days out from the first ballots being cast across the Hawkeyes State.

Eight years ago, I spent several hours standing in the parking lot of a Delaware Walmart collecting signatures necessary for ex-Arkansas governor Mike Huckabee to make the ballot in America’s first state.

Four years ago, I sported one his trademark sweater vests and campaigned for ex-US Senator Rick Santorum in downtown Charleston, South Carolina and later served as political director for his Louisiana campaign. One of the most treasured experiences in my political life was sitting in the Santorum war room as the results from the Alabama and Mississippi primaries trickled in.  On my desk is a photo I took with Rick and his wife Karen that night.

Huckabee and Santorum carried the Iowa caucuses in their previous White House bids; however, it seems the same Republican voters who propelled them to their victories in that state, and for that matter nationally, have moved on.

Both are polling at 1% in national surveys and Huckabee is topping out at 4% in the most recent Iowa poll.   Santorum’s numbers are even lower in the state that put him on the map.

The Iowa Field of Dreams of the past has turned into a Potter’s field. Neither candidate will remain in the presidential race come Tuesday.  Rather than allowing their candidacies to be buried in a newscrawler at the bottom of the television screen next week, both have an opportunity to give their presidential bids an honorable end by withdrawing in advance of Monday’s caucuses and thus freeing up their pocket of evangelical voters to line up behind the best alternative to Donald Trump.

Unfortunately, both seem determined to go down in a blaze of irrelevance and rather than contributing towards the nomination of a more viable candidate who genuinely champions the social conservative agenda that they’ve defined themselves as advocates, the social conservative duo spent the balance of their undercard debate evening as props in a shameless Trump political ploy.

If you are a social conservative who respects Huckabee and Santorum, please do not waste your vote on Monday.   You can express your appreciation for their candidacies by helping pay off their campaign debts (those emails will start flooding the email boxes of their supporters on Tuesday or Wednesday).

The Candidate Who Shall Not Be Challenged

The whole Trump obsession with Megyn Kelly is strange and unpresidential. However, anyone who believes Trump skipped out on the final debate before the Iowa caucuses because of Kelly is naïve.  It has been suggested that Trump’s real motive was to avoid being caught in a verbal crossfire of seven candidates on the eve of the caucuses as a means of protecting his lead.  That strategy is hardly unprecedented and has proven to be effective.

However, the attempt by the Trumpsters to link his skipping of the last pre-caucus debate with Reagan’s similar decision in 1980 and his later nomination is absurd. Reagan, who was also trying to protect his lead in Iowa, opted to not participate in a televised debate and subsequently lost the Iowa caucuses to George H.W. Bush, throwing the Gipper’s formidable campaign into a panic going into New Hampshire.

Reagan regained his footing in the Granite State, shook up his campaign staff, and benefited from a fatally divided establishment bloc of candidates. Reagan did go on to win the GOP nomination not because he punted on the Iowa debate but in spite of it.

We’ll see if there is any short term or long term consequences for Trump by his debate stomp off.

How the Rest of the Field Did

One upshot for Trump was that the six candidates on the stage not named Ted Cruz used the opportunity to go after the target of convenience, that being the Texas US Senator and closest rival to the New York billionaire in Iowa.

Cruz seemed unprepared for the ice loaded snow balls hurled at him from his fellow candidates and the moderators and took umbrage, poorly selling a facetious threat to walk out the debate over the belligerence he encountered from all corners.

Cruz did rebound later in the debate, handling the ObamaCare question like a champ and highlighting the support he has from Iowa congressman and illegal immigration critic Steve King.

Florida US Senator Marco Rubio has regularly performed strongly in the debates though he came off shaky in the final Iowa scrum. Fellow Floridian Jeb Bush got the better of him in an exchange over Rubio’s previous amnesty position though Rubio did get out some solid anti-Hillary Clinton talking points.

Bush arguably had his best debate yet and badly needed a strong showing to absorb the bad numbers he will likely receive on Monday evening.

Dr. Ben Carson ahad his best debate performance yet though it’s likely too little, too late for the good doctor. Kentucky US Senator Rand Paul did not make the most of his invitation back to the main stage though did make a point of getting in some licks on Cruz.  Ohio Governor John Kasich failed to stand out, which could be a problem as Bush begins to slog his way up in New Hampshire, a state Kasich has pinned his hopes on.

New Jersey governor Chris Christie received a Bridgegate question on the nose and dismissed it, yet I don’t think he succeeded in convincing anyone that the scandal is truly behind him.   Otherwise Christie did well, displaying the aggressive style that Republican voters want their nominee to have against the Democrats.