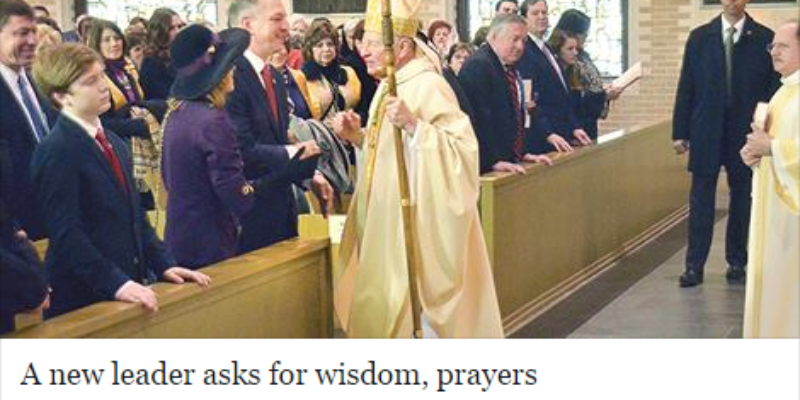 Gov. John Bel Edwards (D) is a longtime Catholic and it seems he’s got the Archdiocese of New Orleans’ blessing these days.

In the Archdiocese’s official newspaper this week, the Clarion Herald, Edwards is front page with a picture-perfect photo of he and Archbishop of New Orleans Gregory Aymond shaking hands.

The caption of the photo reads: “Archbishop Aymond celebrated the Mass before Edwards’ inauguration later that day. During his homily, the archbishop said Edwards showed what kind of leader he would be by his choice of Scripture. Archbishop Aymond said Edwards asked only for “wisdom” to “do what is right and good for the great state of Louisiana.”

Oddly enough, the Clarion Herald does not point out that Edwards recently made a decision quite contrary to his Catholic, pro-life upbringing, something that has put him at odds with fellow Catholics.

Edwards’ hand-picked appointment to run the state’s Department of Health and Hospitals (DHH) is one of the most pro-abortion doctors in the state, Dr. Rebekah Gee.

Gee has long been a pro-abortion advocate who has received accolades from the National Abortion Rights Action League (NARAL) and Choice USA, one of the largest abortion organizations in the country.

However, there is no mention of this in the Clarion Herald. But, it is not all-that-uncommon for the Archdiocese of New Orleans to take a more liberal approach to social issues.

In December 2015, the Clarion Herald ran a piece promoting the idea that the Islamic faith and the teachings of the Catholic Church are very similar. Around that same time, a Catholic priest with the Archdiocese stood behind a Muslim leader in Metairie during a press conference to further the narrative that Muslims in the area were being “bullied.”

Back in 2012, the Clarion Herald ran a piece where it endorsed the idea of “comprehensive immigration reform,” claiming that it was “far from amnesty.” And in February 2015, the newspaper reported on the death penalty and claimed that “we have been blind to the fact that white privilege still exists, despite the fact that we wish race was not a factor in our society.”

Though the Archdiocese does not seem to be showing any interest in Edwards’ pro-abortion appointment, it has come out strongly against the expansion of Planned Parenthood, the country’s number one abortion provider.

A New Orleans Planned Parenthood Uptown clinic has seen major push-back from Aymond and pro-lifers who said they would not conduct any business with contractors who helped build the new facility.

At the time, Aymond was portrayed as a bully by the New Orleans Advocate, but the Hayride came to his defense, pointing out the Louisiana media’s track-record of painting pro-lifers to be right-wing extremists.

Interested in more national news? We've got you covered! See More National News
Previous Article Bend Over Louisiana Because John Bel Wants More Of Your Money
Next Article PRAGER U: Is America Racist?