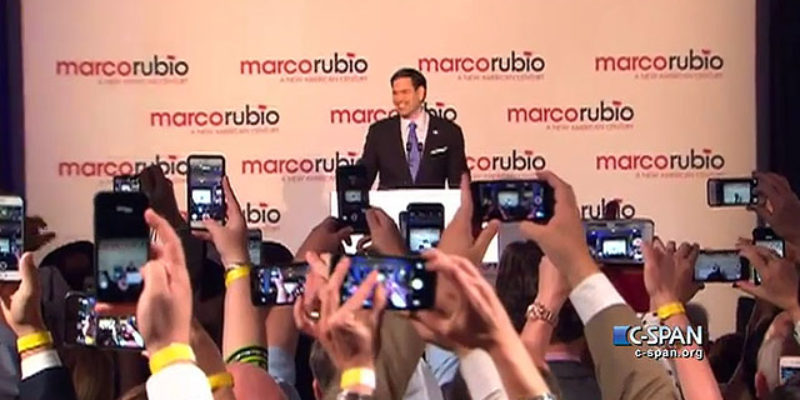 One of the recurring fantasies of many in the media is that Republicans are going to wake up and finally acknowledge that Marco Rubio is their nominee. Politico (again) has one of these types of stories today.

The thinking behind this is as goes:

I hate to break this news to the media, DC based consultants, and other Rubio fans but Marco just isn’t going to happen this year. The thing you have failed to take into account is actual Republican primary voters. They may like Marco Rubio as a person, but they don’t think he should be president.

Bloomberg View columnist Leonid Bershidsky has this observation of both Rubio and Ted Cruz when he saw them in Iowa:

Unlike Trump, Cruz and Rubio may be true conservatives. But also unlike the rule-breaking billionaire, they don’t come off as people who can afford to do and say anything they please — an ability thatlends Trump his powerful crowd appeal. They try too hard, and they fail to connect on a human level.

Rubio comes off as too controlled by his consultants. At times, he is little more than a robot spouting off canned talking points. For a guy who was hailed by some as the greatest politician since JFK, he seems too much like Mitt Romney 2.0. Just like Romney, Rubio has a nasty habit of pandering too much for votes with the most ludicrous example being that he bought a gun to protect himself from ISIS.

There’s also the factor of polling. We can discuss the fact that he’s stalled in Iowa and is losing ground in New Hampshire. But the most damning polling is that Rubio is losing in his own home state. If he can’t beat Donald Trump in Florida, how the hell is he going defeat Hillary or Bernie?

If you’re hoping for Marco’s “New American Century”, the evidence is coming in that you may have to wait beyond 2016 for it to happen. It’s increasingly hard to envision a credible scenario where he emerges as the Republican nominee for president.