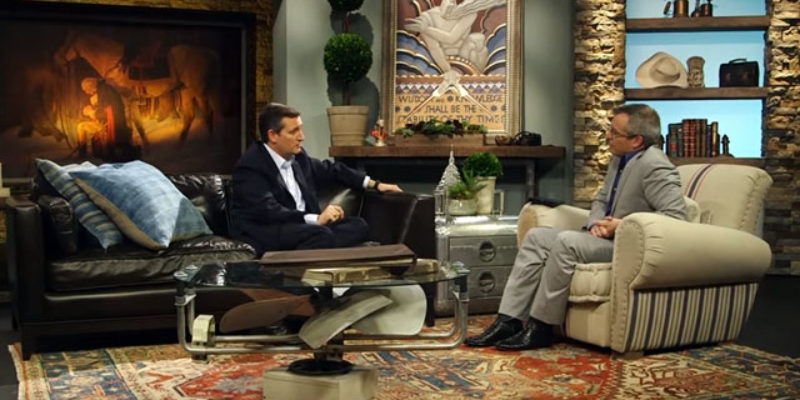 This goes 17 minutes, and it was put out by Keep The Promise, which is a pro-Ted Cruz PAC. It’s a biographical film on Cruz and how he came about his Christianity and his embrace of constitutional conservatism – which come together in a cogent philosophy he expresses perhaps better than any Republican politician since Ronald Reagan.

The first five minutes is really worth your time if you don’t have the whole 17, as it tells the story of Gaylen Wiley, the pastor who led Cruz’ father Rafael to God and subsequently baptized the Cruz family. Wiley later retired to Tennessee, and Ted Cruz hadn’t seen him in nearly four decades until Wiley turned up at a rally he held in Murphreesboro, outside of Nashville.

For whatever reason, there are people calling themselves conservatives who are throwing in with Donald Trump now, and the outcome of a lot of the early primaries – at least according to the media wisdom – seems to be settling that Trump will be the winner of the Republican nomination. If this is true, it’s a waste and a missed opportunity.

Donald Trump isn’t a conservative, and Donald Trump – for the admitted good he’s done in laying waste to the idiocy of political correctness and changing American politics into a much more open forum for the discussion of ideas that a year ago were all but forbidden – is not the champion of the little man he purports to be. Trump is a faux-populist who practices Politics For Dummies by throwing out red-meat sentiments to rile up a mob. But if you pay attention to Trump he’s not using his demagogic talents in service of any cogent philosophy; they’re little more than rhetorical diarrhea.

To endorse Trump over Cruz is a surrender. It’s the easy way out. Polls of people who may or may not even vote show Trump in the lead, largely because of low-information voters who haven’t a clue what they’re actually supporting and have no concept of what conservatism is. If you sign on to that, you’re either a sellout or a groupie. And no, this line of rhetoric saying Cruz can’t win the general election and Trump can is not remotely true. It isn’t supported by polling, and it isn’t supported by history.

Does that mean Trump is unsupportable against Hillary Clinton or Bernie Sanders? Of course not. Anyone calling himself a conservative who prattles about how they’d cross the aisle if he were the nominee, or vote 3rd party, or stay home is little more than a drama queen.

But you can’t see Trump’s rhetorical jumble and reality-TV road show as anything other than inferior to the presentation of a cogent philosophy. That’s what Cruz offers, and the video above shows where it comes from.