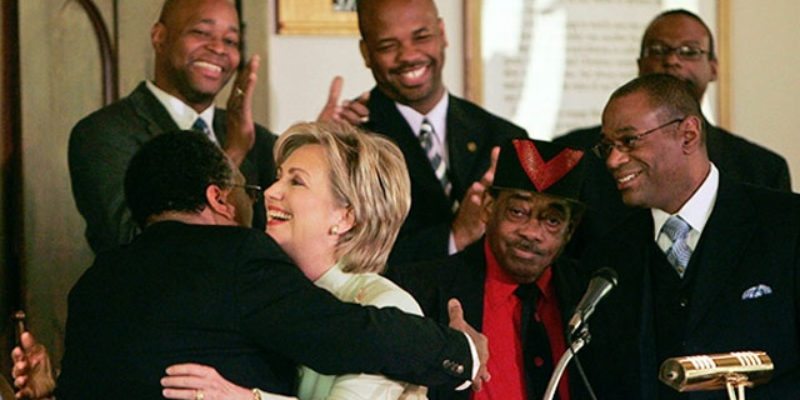 So says POLITICO, and based on the campaign’s statements last night there’s no reason to believe otherwise.

Staffing and strategy will be reassessed. The message, which so spectacularly failed in New Hampshire, where she was trailing by 21 points when she appeared before her supporters to concede to Bernie Sanders, is also going to be reworked – with race at the center of it.

Clinton is set to campaign with the mothers of Trayvon Martin and Eric Garner, unarmed African-Americans who died in incidents involving law enforcement officers and a neighborhood watch representative, respectively. And the campaign, sources said, is expected to push a new focus on systematic racism, criminal justice reform, voting rights and gun violence that will mitigate concerns about her lack of an inspirational message.

“The gun message went silent in New Hampshire,” remarked one ally close to the campaign. “Guns will come back in a strong way.” She is expected to highlight the problem of gun violence as the leading cause of death among African-American men as she campaigns in South Carolina on Friday.

In her concession speech, which she gave about 30 minutes after the polls closed with Chelsea and Bill Clinton standing behind her, Clinton began to preview that new message — framing her remarks around a call for human rights and an end to discrimination.

“Where people are held back by injustice anywhere in America, that demands action,” she said. “We also have to break through the barriers of bigotry.” She added that “immigrant families shouldn’t have to lie awake at night listening for a knock at the door.”

Not to mention the new effort to blame the water crisis in Flint, Michigan on that state’s Republican governor.

And then there is the campaign memo that Clinton’s campaign manager Robby Mook, who is starting to look like a clown given the nose-dive that campaign has taken from its previous inevitability (though Mook has been dealt a rough hand with the e-mail scandal which is a cancer on his client’s campaign), put out last night…

The smart decision would have been to ignore New Hampshire and concede it to Sanders so that spinning the loss would have been easier. It’s not like she would have done any worse than 60-38 if she hadn’t shown up.

And let’s be honest – Hillary usually does a lot better when she’s out of sight. The idea of Hillary is always more palatable than the real article.

What’s interesting about what’s coming – in which Hillary and Bernie Sanders, who is in Harlem today attempting to enlist Al Sharpton in his little communist revolution, will be competing to see who can promise more free stuff and pander most to the black community – is whether such intense messaging to glorify the #BlackLivesMatter movement won’t make the Democrat nominee repulsive to the electorate as a whole.

Will Asian voters be fired up by a candidate who can’t shut up about Eric Garner and Mike Brown? Will Hispanic voters? How about the old-fashioned union Catholics in the Midwest, or soccer moms in the suburbs?

So far, Hillary Clinton has shown little of the rhetorical skill of her husband that would enable her to pander to the black community in a way that won’t turn others off. And everything Sanders says would rightly make non-ideological Americans break out in hives rather than vote for him in a general election (last night was likely the first real exposure a lot of people got to a Bernie Sanders speech, and were terrified).

A month from now, the Democrats could be drowning. If Hillary’s campaign dies before the Democrats find a replacement for her, you’ll have Mike Bloomberg as an independent candidate and the potential for a Trump/Bloomberg/Sanders general election in November, as though no Americans other than obnoxious New Yorkers even count.

This is the strangest election cycle in American political history, and it’s just getting started.