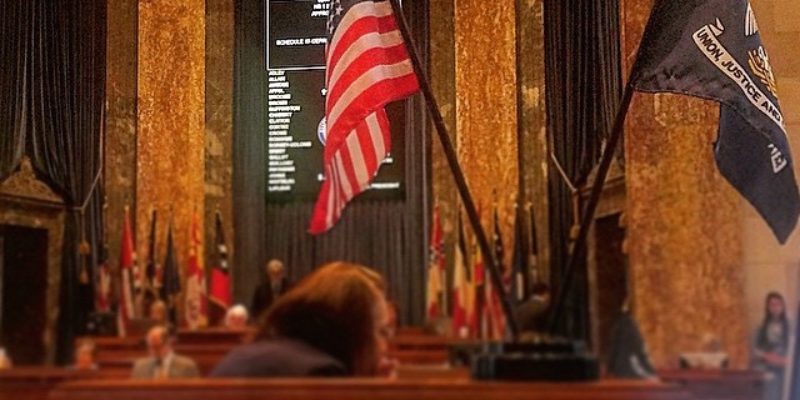 April 11, 2015. Men clad in sharp suits stand around chattering; women click around in their kitten heels on the blue carpet. The bell rings. The pledge is said and the prayer is prayed and the gavel is rapped. The 2015 Legislative Session has convened.

Most of the Louisiana legislature is red, meaning Republican. The state flows deep red and has for a considerable amount of time. At the commencement of former two-term Republican Governor Jindal’s administration, the executive and legislative branches worked hand-in-hand, agreeing on most things and working out issues quickly and efficiently. However, change is inevitable and volatile. When Jindal began making policy changes that made the state and, in turn, legislators uncomfortable, tensions rose. In the last years of Jindal’s administration, legislators wanted nothing to do with him. They slipped out of the chambers when he would visit as to avoid contact; they bashed his budget cuts and executive orders partly because the legislators disagreed, but partly because they wanted to hold the support of their electorate.

Last year’s session was tense. A Republican governor and a majority-Republican legislature disagreed on almost all policies, especially those regarding cuts to Medicaid and higher education. We saw a party divided. And now in the 2016 session, we face an entire state divided.

John Bel Edwards, a Democratic State Representative from Amite, Louisiana has snatched the most powerful position in Louisiana politics out of the hands of the Republican Party: the governorship. He ran a campaign that pushed his right-leaning Democratic views and attacked the past of his opponent, U.S. Republican Senator David Vitter. The election was Vitter’s ballgame in early 2015 until the Edwards campaign highlighted Vitter’s prostitution scandal that occurred years before Vitter’s second term in the U.S. Senate.

“He (Vitter) had a prostitution scandal brought back to light by an opponent running on honor who also took traditionally Republican stances. Vitter was also stuck in a bruising primary with a practically untouched Democratic opponent,” said David Scotton, who worked for Vitter’s communication team. Scotton agreed with Vitter’s policies and was willing to overlook a battered past for a future that looked bright. Trusting Vitter was easy for Scotton to whom Vitter had been a political mentor; it was not so easy for those whom Edwards reached with his message.

So now, February 2016, Vitter has been defeated and Edwards has been inaugurated. Louisiana already feels the load of some pretty hefty changes. Edwards expanded Medicaid, something that sounds great but which comes with an enormous price tag; how are we, as a state, going to pay for that? He guaranteed tax increases on things like alcohol, the wealthy and more. No pay cuts have been made to anyone in his cabinet, but locked-in positions with his administration have been guaranteed. Institutions of higher education are preparing for his proposed $65 million hit. In addition to this financial crisis in which Edwards finds himself, he has a Republican legislature with which to work.

The battle lines were drawn between Edwards and the legislature before Edwards could change his address to 1001 Capital Access Road. After his victory Edwards turned to New Orleans Democrat Walt Leger to run for Speaker of the House of Representatives. Speaker of the House holds major responsibility in guiding the Louisiana House on decisions that determine which bills will be passed on to the Senate, the upper branch of the legislature, and ultimately passed to the governor to sign into action. So Leger ran, but he didn’t win. Representative Taylor Barras, a Republican from New Iberia, Louisiana swept the victory from under Leger’s feet, calling for an all out war between the Louisiana executive and legislative branches.

The 2016 Louisiana Legislative Session convenes on March 14. Louisiana government will face higher education issues, abortion issues, women’s and gay rights issues and more. The upcoming session will likely move from the rocky terrain it has been navigating for the past few years to more mountainous terrain with our new governor.

State legislators are optimistic but foresee some partisan activity. Republican State Senator Dale Erdey said, “I think there’s going to be tension. I don’t think it’s going to run smoothly, but I think we will get the results done as opposed to the D.C. bunch. There will be partisan politics involved, but if I read my legislators correctly, there’s a willingness between Republicans and Democrats to fix our budget problems. And I think the overall willingness to do that will overall diminish the partisan politics and a compromise will be reached. When I say compromise, we are referring to a combination of cuts and revenue raising measures.” Senator Erdey explained how the legislature plans to work together to get Louisiana out of this financial swamp.

Many are fearful of a relationship between the Legislature and the governor that mirrors that of Congress and the president. Some are cynical, saying the governor will have to sign executive orders to get anything that he wants passed; some are optimistic, saying that the branches will be able to work together.