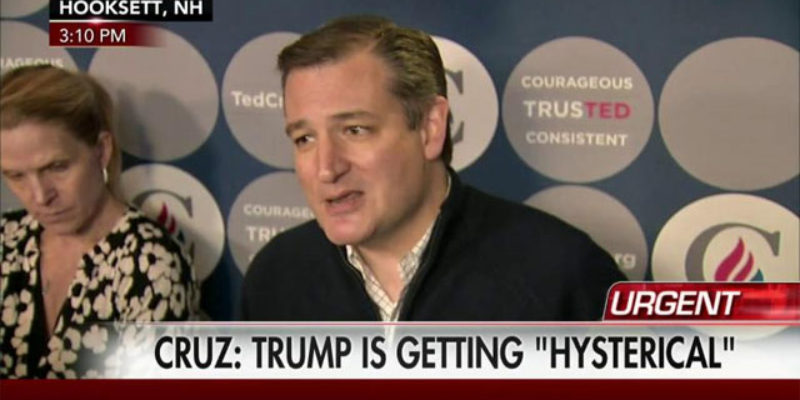 As Joe Cunningham mentioned earlier today, Donald Trump went off on Twitter about this stupid Ben Carson flap and how Ted Cruz “illegally stole” the Iowa caucuses – which was a meltdown most thought was coming immediately after he lost on Monday night.

And naturally, Cruz was asked about it today in New Hampshire. As you might expect, Cruz gleefully jumped on questions about the day’s tempest in a teapot and used it to his advantage. Below is a video containing a several minutes of textbook political trolling, with a healthy mix of substantive critiques of Trump as a candidate and deliberate schoolyard provocations designed to make him look like a fool.

Including the coinage of a new word: “Trumpertantrum,” which signifies times when Donald Trump becomes unhinged and makes ridiculous statements beclowning himself.

It’s not the most entertaining you’ll see Cruz, but it’s pretty devastatingly effective. He makes the point that Trump simply cannot withstand a substantive debate on issues, because he doesn’t know anything about the issues. So instead Trump deals in stupid subjects like the accusation that Cruz is an “anchor baby,” which is false on all the particulars, or that Cruz “illegally stole” the Iowa caucus because his people spread a CNN report that Carson was soon to get out of the race (which Marco Rubio’s camp apparently was just as involved in doing as Cruz’ camp was). That alone makes Cruz’ comeback worthy of a look.

Plus, Trumpertantrums. As soon as there’s an internet meme to go with that word, immortality awaits. And the prospect of Trump nuking Denmark as president.

Things really get going at about the 1:20 mark of this clip…

Interested in more national news? We've got you covered! See More National News
Previous Article Here Is Where A Pro-Rape Blogger Is Holding A Meeting In New Orleans This Weekend
Next Article House Divided