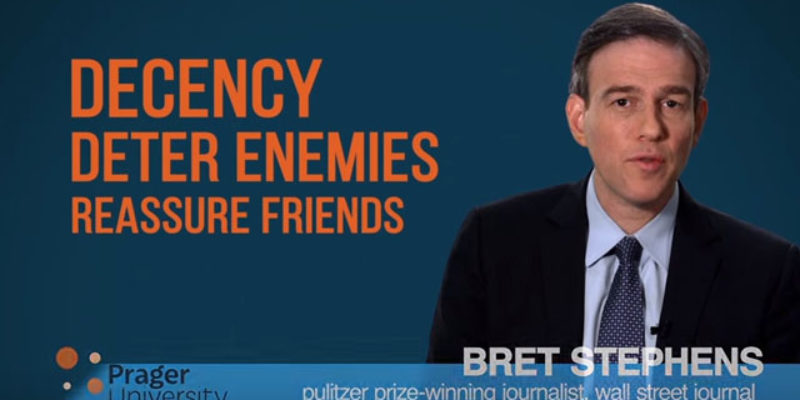 The second of today’s Prager University two-fer, which will go down as a fairly unusual edition – namely, because it’s exceedingly rare that we would disagree with the subject matter of a Prager U video.

Our disagreement with the Wall Street Journal’s Bret Stephens here isn’t absolute. He suggests that an activist American foreign policy which is aimed at applying successful “broken windows” police tactics to American foreign policy and installing America as the world’s policeman again does not need to involve also installing America as the world’s nation-builder. And in that, his suggestion is a good deal better than the ultra-ambitious George W. Bush “freedom agenda” by which trillions of dollars of American money would be spent trying to turn hellholes like Afghanistan and Iraq into First World nations like Germany and South Korea.

Still – is it really a good idea for America to be Johnny On The Spot in resolving every trouble spot around the globe? Missile strikes and special forces raids aimed at keeping the global peace sounds a lot like an invitation to troublesome entanglements.

And besides, we’re not sure Bill Clinton even had us on the right side of the Balkans conflict. Stephens uses that as an example of what we should be doing.

But here’s his case. Evaluate it for yourself.

Interested in more national news? We've got you covered! See More National News
Previous Article PRAGER U: Sex And The Power Of The Visual
Next Article BAYHAM: For Trump and Hillary, It’s Win Iowa Or Bust