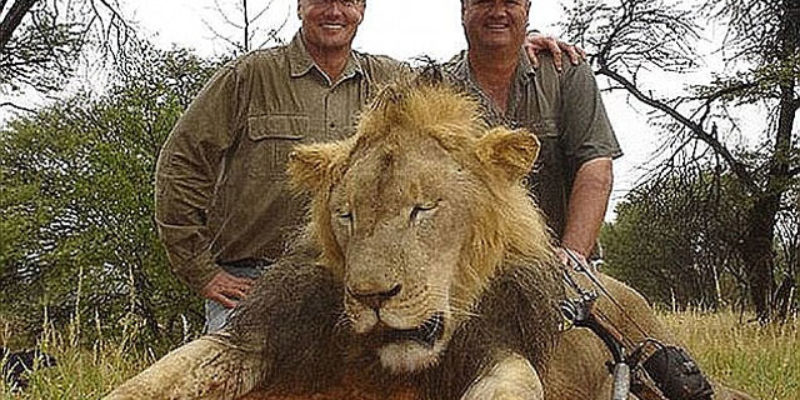 Remember Cecil? He was the allegedly famous lion shot by an American dentist on a safari, and his death was turned into a cause celebre by the animal rights movement, who essentially hounded the dentist into hiding and shut his practice down for a time due to the uproar.

And since the Cecil controversy, the safari business has ground to a halt. Nobody wants to be the next safari hunter paying upwards of $50,000 for the momentarily thrill of taking a big game trophy only to face the kind of attacks the dentist did.

Zimbabwe’s largest wildlife reserve has warned it may have to cull 200 lions to deal with a population explosion triggered by the international fury over the death of Cecil last year.

Bubye Valley Conservancy, whose owners include Charles Davy, father of Prince Harry’s former girlfriend Chelsy, now has more than 500 lions, the most in the country’s dwindling wildlife areas.

But they have been destroying populations of antelope, giraffe, cheetah, leopards and wild dogs after the driest summer on record kept grasses low, making them prime targets.

The situation has been blamed on ‘the Cecil effect’ that resulted from the killing of Cecil the lion, a prized resident of Hwange National Park who was shot dead by U.S. dentist Walter Palmer.

Such was the worldwide outcry, Palmer was forced into hiding for months and other big-game hunters have feared receiving the same treatment if they went to Zimbabwe.

To have 500 lions on that land is to have far too many.

And when the lions are finished wiping out the other wildlife in the preserve, guess what they’ll do next?

When a lion seized Adam Rijani in its jaws and flung him almost 20ft with one shake of its head, the 13-year-old boy was so paralysed by terror that he felt no pain.

Only when his stepfather drove back the lion did he realise that blood was streaming from deep gashes carved by the beast’s incisors in his left leg and chest.

“When I ran inside the hut to escape, I started feeling pain and the bleeding came,” said Adam. “My heart was pounding from fear.”

Adam was attacked outside his family’s hut in Kikonga village, southern Tanzania, joining a rising toll of the big cats’ human victims.

The number of lion attacks in Tanzania has trebled since 1990. About 100 people now fall prey every year, compared with an annual total of less than 30 in the early 1990s. Two thirds of these attacks are fatal. Lions have killed at least 566 Tanzanians and wounded 308 in the past 16 years.

Experts point to a simple explanation: there are more humans for lions to eat and fewer zebra, wildebeest, buffalo or antelope. Their prey species have all declined outside protected areas and Tanzania now has 35 million people, up from 24 million in 1990.

That’s a report from 2006, but what it describes is fairly timeless.

There was a lot less hunting of lions in Tanzania, and as a result the population of lions exploded. The lions proceeded to take out most of their available prey, and once they’d done that what was left was villagers.

Village after village across Mkuranga has felt the presence of the big cats. The tracks of two lions were found in Mihale village last week, near a gnarled tree trunk where two predators were recently shot for killing cattle.

In Kiparang’anda, lions broke into a hut and ate a mentally handicapped man. No herds of zebra or antelope are visible in the lush forests of swaying palm trees. The lions in this area have little choice but to kill people.

“They actively hunt humans,” said Denis Ikanda, a lion researcher on Dr Packer’s team. “You don’t find that behaviour elsewhere. You don’t find it in the Serengeti where there is plenty of plains game. If you stayed in a tent here, you might not last even one night. You would need a death wish.”

Adam Rijani, now 15, owes his life to his stepfather, Ali Mohammed Lindunga, 60. After the male lion hurled the boy into a maize field, Mr Lindunga rushed towards the beast, shouting and waving. This distracted the lion, allowing Adam to run inside the hut, where the family hid in terror.

For an entire night, the growling predator circled their home and tried to break in. There have been cases of lions breaking down the doors of village homes, clawing their way through thatched roofs or even scratching holes in mud walls.

A lion is a nuisance animal to the people of southern Africa, just like bears, wolves, coyotes and alligators are nuisance animals to people in North America. Here in Louisiana we have a fairly generous hunting season for alligators, because without hunting them the gator population will explode and lead to a lot more attacks on people who live near to swamps and other places they’ll use as habitats. And as we’ve seen in Florida, an alligator (or a crocodile) is more than happy to migrate out of a swamp into a private lake or a golf course. Or a swimming pool.

Which leads to all kinds of havoc.

And as it turns out, the alligator trade is fairly lucrative. The skins are marketable, and the meat can be something of a delicacy in the hands of the right chef.

But there isn’t an enormous amount of outrage about alligator hunting. The animal rights crowd hasn’t particularly taken up that cause. You don’t see Russell Brand or Ricky Gervais descending upon Lafayette or Houma to whine about the plight of the poor alligators.

What they will do is hound people like Walter Palmer for taking a lion.

And in the process completely muck up a major industry in a country, Zimbabwe, which is one of the poorest on earth.

Our economy could probably survive something like that, but we’re the richest country on earth. Zimbabwe, where they’re already flirting with starvation, is less well poised for it.

So they could face the economic loss from culling those lions, or they could not do the job and let Zimbabwe turn into Tanzania where villagers serve as food for the great beasts.

All of this is the long way around the bush – which is to say that animal rights activists are some of the stupidest and most destructive people on this planet, and when they’re allowed to ply their wares they don’t actually help the animals they advertise themselves as helping but instead injure their fellow human beings – in this case who are among the poorest on earth. And the Cecil controversy, and its aftermath, illuminates this situation perfectly.

So for the sake of humanity, pound an animal rights activist when you can. If you can get them to shut up you’ll have done the poor Africans a service.