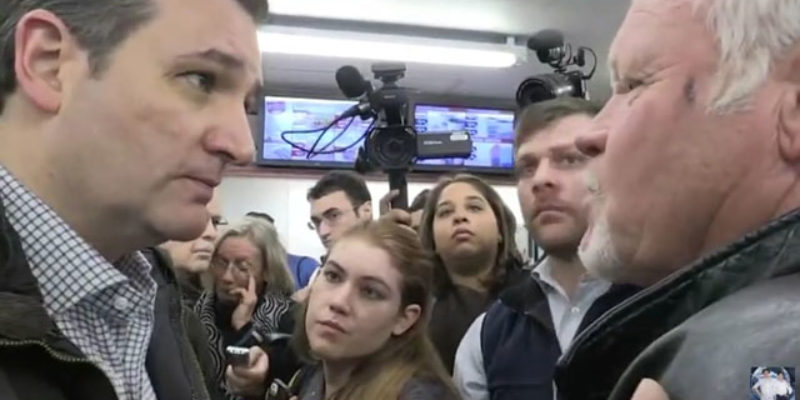 This went viral over the weekend and we figured we’d throw it out there for folks to see. It’s a pretty good example of how retail politics is done in difficult situations.

It’s Ted Cruz in Iowa, being accosted by an angry farmer who’s selling what sounds like his entire corn crop to the ethanol plant down the road and who’s heard Cruz is for killing the ethanol industry by getting rid of the subsidies and mandates that favor it.

Which is not completely a lie. Cruz is for at minimum a five-year phase-out of those subsidies and mandates, but he’s for setting ethanol loose in the marketplace without them – and also without the other restrictions that affect the market like something called a “blend wall” set up by the EPA. At the moment, you have a 10 or 15 percent ethanol blend, and then you have an 85 percent ethanol blend that powers “flex fuel” vehicles. But you don’t really have anything in between, and Cruz is for getting rid of those rules and letting people put whatever blend of ethanol in their gas tank that they want. And he says that will likely help Iowa corn farmers more than any stupid mandates or subsidies would, with the added benefits that the lobbyists and public sector crowd get cut out of the mix and Washington doesn’t control the market.

The farmer, who’s a bit of a blowhard and came on like a ton of bricks before Cruz started talking to him, comes away with a little different perspective on Cruz. Other sites have said he converted to a Cruz supporter on the spot, and we’re not sure about that, but it’s clear Cruz at least gives him something to think about.

That’s what good retail politics can do.